Is there any significance of the colors of Starfleet Uniform?

Starfleet has the three uniforms - blue, gold and red in TNG onwards. I know that these each represent different areas, but is there a canon reason for why these colors were used for each area? e.g. why science is given blue? Please note - I am not asking about the change of uniform, but instead am asking about the canon significance of these colour in the ST universe.

In the TNG Era, based upon the DS9 Tech Manual

Red for operations in TNG is given as the color of starfleet uniforms in general.

Blue for sciences was retained/returned from prior eras.

Gold¹ was returned because it was the traditional third color, but since Red replaced it for Operations, Technical services got gold instead.

TOS Movie Eras - TMP, and Rest of the TOS Movies

While there's no official canon on it, the licensed games have spoken to it, citing that there were complaints that it was too broad to use just the 3 colors.

We see a large number of different colors in TWOK and later - the left sleeve cuff stripe and the right shoulder strap are in specialty colors.

Roddenberry actually was combining late 1800's USN speciality colors, in simplification, with the carrier practice of colored shirts on the flight deck.

Red was used for Naval Engineers. It was also used for other technical specialists.

Blue was used for sciences, mimicking the old USN cobalt blue for Medical and Light Blue for Civil Engineers.

Sparkly Silver/Gray is seen as a flashback for an academy uniform ("Shore Leave" - the cadet is created from Kirk's memories, so this might not be a contemporary uniform to the TOS era).

As an army officer, Roddenberry was also personally familiar with color distinctions - all US services except the Marine Corps have used color distinctions for specialists at some historical points (for the USAF, it was before the Blue uniforms were adopted). During Roddenberry's time in service, the use of colored ascots with fatigues was common (unit authorized), full dress uniforms used colored backdrops on the officer rank insignia, and colored aiguillettes on the service dress uniform; enlisted had not yet acquired the colored rings behind the US insignia worn on service dress.

The colors are the same as for TOS.

The second movie has moved to a slate gray dress uniform; it is unclear if this is a service or full dress uniform.

The DVD extras imply that the red service uniform is inspired by the main timeline TOS uniforms. The admirals' Gray & White is a clear homage to ST:TMP.

The flashing color was worn between the officer's rank cuff stripes, or for passed midshipmen and later for ensign, to both sides of the single stripe. Line officers had no such trimming. It was also used on the flashings of the collar; white flashings were worn by line officers.

This practice was discontinued in 1918; at that same point, the USN adopted what would remain the basic pattern of uniforms and insignia through the present. At present, corps colors are used only in unit heraldry. Duty group assignments on carrier aircrews are indicated by colored turtleneck shirts.

¹ Gold: In TOS, it wasn't actually gold. It was green. How he came up with green, however... Truth is, the references to Gold Tunics are from extended universe sources, not from the actual footage. They are golden colored in the Animated series as well. This may, however, be derived from the carrier shirts.

According to Bill Theiss (Senior Costume Designer for Trek TOS) the colours were chosen on the basis of complementing the complexion of the various crew members, the ready availability of material at the studio as well as the desire to ensure that the uniforms were equally distinctive in black and white; 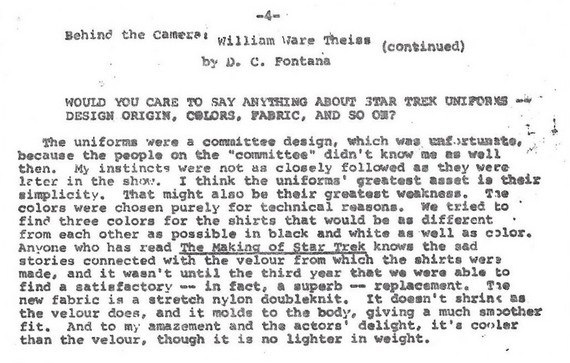 He also confirmed that the film stock chosen would make the colours act in odd ways on film so the canon uniforms we all know and love aren't actually the right colours at all;

It struck me that once the decision had been made to give the four main cast members (Kirk, Spock, Bones and Scott) their own distinctive colours, it then made perfect sense that their various teams would also wear the same colour. 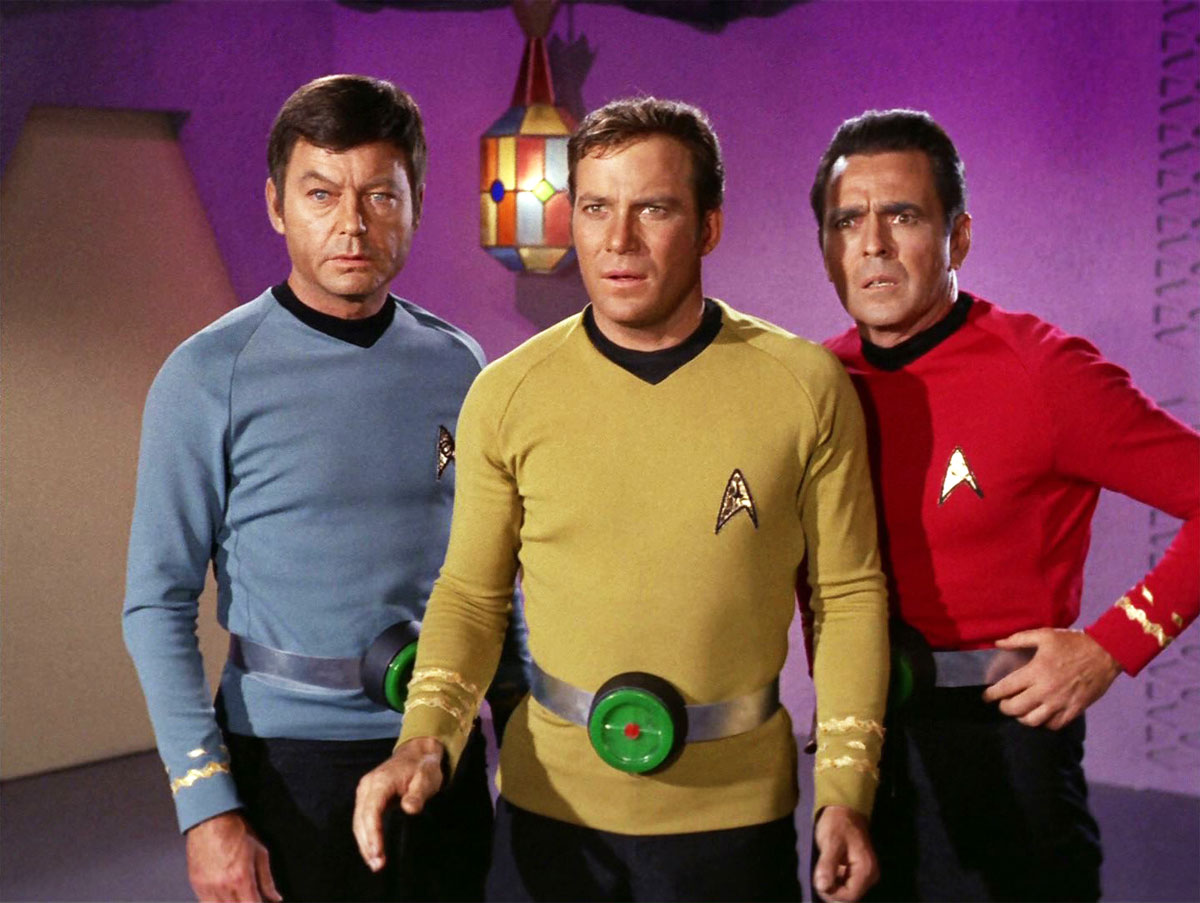 A very handy chart can be found on Memory Alpha describing what each color uniform means in each era of Star Trek. http://en.memory-alpha.org/wiki/Starfleet_uniform

But to summarize the significance - different colors represent different divisions of Starfleet, essentially three core areas of operation within the Stafleet chain of command. They are:

Comprises Admirals, Captains, and First Officers, responsible for directing orders to the other divisions, as well as general administration duties. This has gone through a number of color changes, with early Command uniforms being a Yellowish-orange, then a dim grey, gradually shifting towards a gold-tint, and eventually became predominantly red.

Represents the division of starfleet responsible for keeping things 'operating', representing Engineering but also Security (keeping operation of Starfleet 'secure'). Oddly enough, we see a reverse in color trends for Ops, with colors initially being Red, later Green, tan and blue, then red again for awhile, before finally taking on the orangeish/yellow tint Command once used.

As a primarily exploratory and peaceful organization, Starfleet's Science department comprises those individuals in charge of Scientific discovery, including Science officers, but also includes medical staff and mental health departments. Their initial color was Teal, and green/blue has largely predominated their ranks with Teal being their most modern color, but a number of hues and even a few other colors such as white and orange have been used for Science officers in the past.

There has been some departure from this formula - particularly between 2260-2350, where several departments 'within' these divisions had their own uniform color, but these three divisions make up the primary parts of Starfleet, and uniform color has for most of the Star Trek canon been determined by which division the individual is in.

As for the reason each color was chosen...there's no canon reason behind the colors OR the change in colors over time (other than regulations changing over time being a pretty common thing in military dress code), but there IS a given reason that Red was chosen for command in TNG - the lighting for the show made Red look much more impressive than the original yellow-gold colors from TOS.

62
When did the red shirt careers change to yellow shirts in Star Trek and why?
23
"Star Trek: Discovery" Uniforms: what is the meaning of their colors?

61
Why did Deanna Troi keep wearing a Starfleet uniform after Chain of Command?
13
Is there any significance to Captain Picard's baldness?
23
Why is Data's uniform gold and not red?
64
Has any Star Trek character appeared in all three division uniform colors?
21
In Star Trek, what are all the low-ranking Command Division officers doing?
50
Why does Captain Kirk wear green in the DS9 episode Trials and Tribble-ations?
19
Why did Worf wear red in TNG Season 1?
19
How much weaponry does a starbase carry to defend itself in Star Trek?
4
What's the junior officers' uniform variant Memory Alpha mentions?
11
Why was T'Pol exempted from Starfleet uniform protocol?