I have all the All-New X-Men and Uncanny X-Men (Vol 3) comics including the 10 issue event "Battle of the Atom".

Question: What is the correct reading order? When do I start the "Battle of the Atom" event with respect to the story lines of All-New X-Men and Uncanny? I want to stay true to the story as much as I can. Do I read each series one at a time or do they overlap at any time before the event?

I'm 7 issues deep into All-New X-Men and every website I go to tells me something different. One website told me A+X was after All-New X-Men so I bought all them only to find out they had nothing to do with the story.

Well if you want to read All-New and Uncanny in chronological order you need to know when each began: All-New X-Men debuted in November 2012 while Uncanny X-Men (vol 3) debuted in February 2013.

Which puts All-New three issues ahead, but the first two issues of All-New came out within the same month (to whet our appetite). So when you finish issue 4 of All-New you should begin Uncanny... I think the break there in Uncanny was because MARVEL wanted us to read the Five issue mini-series AvX: Consequences as a prequel to the new Uncanny X-Men series.

I read them all as they came out, I would read an issue of All-New followed by that month's issue of Uncanny, which is how I recommend reading them unless so noted within the issue itself.

Here's the reading order of Battle for the Atom which you already know from the numbering on the issues but I figured what the heck! PLUS who doesn't love seeing Arthur Adams' X-Men: 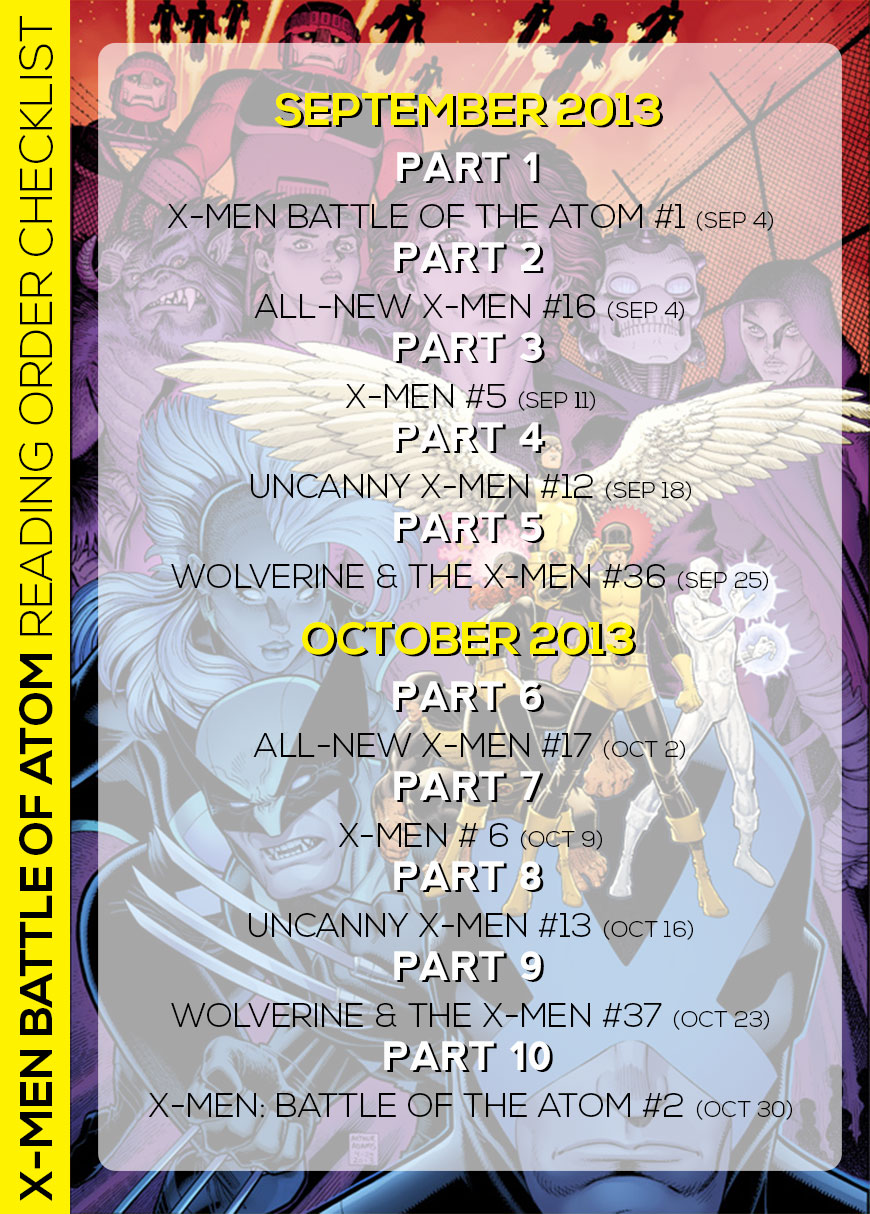 Not the answer you're looking for? Browse other questions tagged marvel x-men suggested-order or ask your own question.

21
Did Chris Claremont have to change his long-term plans for the X-Men in the early '90s?
13
Uncanny, Astonishing, Ultimate and Legacy...How does this tie in with X-Men?
6
When does Illyana Rasputin train with Doctor Strange?
1
Which order to read the IDW Transformers comics?
8
Which order should I read the Humble Bundle IDW Star Trek comics in?
3
What are the essential comics in Marvel's "Civil War" comic event?
3
What reading order would get a comic newbie into Superman Rebirth?
2
Is there any Marvel title can be read as standalone flow?