Who was the first full-blooded alien to join Starfleet and be assigned to a spaceship?

Having not seen much of Star Trek: Enterprise, and not being certain if Stafleet proper was officially even founded at the time of those events (uncertain as to whether it was Earth exploration pre-starfleet, or the first exploration made BY starfleet), what non-halfbreed alien species has the distinction of being the first non-human to become a member of a Starfleet crew?

(Note: This specifically leaves out Spock, who was half-human).

If you're referring to the Earth Starfleet shown in "Enterprise" (e.g. which predates the UFP) then the strongest contender is Doctor Phlox, followed by T'Pol.

Although Phlox is on an "exchange program" he readily identifies himself as the ship's Chief Medical Officer and was in that capacity well before T'Pol agrees to join the Enterprise' crew.

T'Pol also becomes a member of the crew (after resigning from the Vulcan High Command) and retains her rank and station as Second-in-Command and Science Officer of the Enterprise although it's not clear whether she also holds a honorary (or field) Starfleet rank in that capacity. 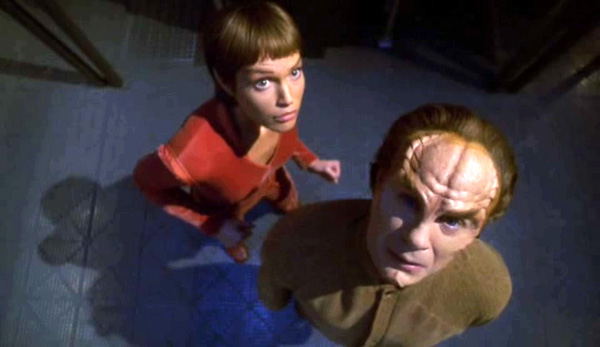 If you're referring to the Federation Starfleet then that comprises a fleet of ships representing all the worlds of the Federation, not just Earth.

Per the Federation Charter mentioned in the excellent (and semi-canonical) "Starfleet Technical Manual", the founding members of the Federation each contributed ships to the first fleet, with a range of heavy cruisers and support vessels then being custom-built to supplement (and eventually replace) those initial vessels.

Spock was not the first full blooded alien in Starfleet. He was half human.

Captain Garth of Izar who was kirk's idol when Kirk as at the academy looks human but apparently is native to the star Izar. Since Garth looks so human, it is possible that other human looking starfleet members are also aliens.

And the captain and/or other senior officers of the USS Intrepid probably joined starfleet before Spock.

UHURA: Captain. There was a message from Starbase Six. Heavy interference. All I get is Intrepid and what sounded like a sector co-ordinate. SPOCK: Interesting. No indications of magnetic storms in this sector. KIRK: Try another channel, Lieutenant. UHURA: Aye, sir. MCCOY: The Intrepid is manned by Vulcans, isn't it?

Commander Sonak in Star Trek: The Motion Picture may have joined Starfleet about the same time as Spock or possibly earlier.

In the Alternate universe of "Mirror, Mirror" Three may be other Vulcans on the Enterprise:

SPOCK: If I am successful, you see yourself a step nearer to the captaincy. I do not want to command the Enterprise, but if it should befall me, I suggest you remember that my operatives would avenge my death and some of them are Vulcans.

And I think I saw a Vulcan with Spock. Some of them may have joined starfleet in the main universe.

T'Pol and Phlox were never full members of Starfleet as evidenced by the fact that neither of them were ever allowed to wear Starfleet uniforms. After leaving the Vulcan High Command T'Pol retained the position of first officer, but it is stated that her "position is a unique one" within Starfleet probably due to the fact that she never attended Starfleet Academy. Of course, Enterprise controversially retconned a lot of the original series, so Spock's may not be the first Vulcan in Starfleet in this new universe.

Starfleet predated the Federation and was a human idea - one of the many "outside the box" ideas that humans tend to have that Vulcans and other isolationist races would never think of.

Before the retcon that allowed Enterprise to exist, there could have been many "firsts". The USS Intrepid during the TOS era was crewed completely by Vulcans and was a Starfleet vessel - the inference is that all of the Vulcan crew had attended the academy and were Starfleet officers. This does not conflict with the often stated claim that Spock was the first Vulcan in Starfleet - bear in mind he had been in Starfleet for 20 years or so by the time the original series started. The animated series included a lot of other races as well (since they were easier to animate than create in a live action series) but Gene R famously declared that series apocryphal.

In summary, in the post-Enterprise retcon, T'Pol is now the first alien in Starfleet but in the original universe Spock likely was the first as claimed during that series.

Not the answer you're looking for? Browse other questions tagged star-trek aliens starfleet-command or ask your own question.

35
Was Spock the First Vulcan in Starfleet?

49
Why would any Federation starship (such as the Enterprise) have any spouses or youth onboard?
15
Is there anything more to the way others mistreat Spock?
17
The ultimate fate and influence of the HMS Bounty
6
Robert April in the alternate timeline
25
Are there any non-human captains (and up) in Starfleet?
5
How many alien species are compatible with humans?
12
When did the writers of Star Trek decide the Federation doesn't use money?
23
Why didn't B'Elanna Torres have her cranial ridges removed?