How much close control over physical objects is possible with the Force?

The Jedi can control objects with the mystical power called the Force without touching them.

In the movies you can see, that the Jedi or Sith are moving objects really fast and really well controlled from one place to another.

Now I'm wondering, why did Jedi or a Sith never use the Force to fight with a lightsaber, or with more lightsabers, or even to control other weapons like a laser gun without touching them? I imagine a Jedi or a Sith with 4 lightsabers around, all of them are floating in the air, controlled by him and the Force. Would this even be possible? What is the force really able to do?

Or, as mentioned in *Kid Dynamo", why don't they just yank the supports out in a building and let that crush the people inside (or at least force them to devote a lot of effort to keep from dying)? Admittedly, Dooku did use something like that when he forced Yoda to divert his attention to the pillar.

At least in the Expanded Universe, yes, the force is used for such things at times.

Although I don't recall a blaster ever being used that way (although you do see them grabbed from people's hands via the force, and brought back to the Jedi; just not then FIRED via the force), lightsabers were popular targets for augmentation via the force, above and beyond the need for the force to effectively use them to begin with, for most. The Saber Barrier and the Saber Throw were both executed using Force Telekinesis.

Darth Traya is notable for holding three separate lightsabers in the air, and each fighting independently, via the force.

Using the force require focus on the user's part. The more delicate and intricate the task, the more focus needed. In the heat of battle to keep track of using a saber in a coordinated manner is mostly beyond the ability of a large number of force users. That is why you usually see just blunt uses of the force in sudden situations, such as pulling or pushing.

More delicate uses of the force, such as healing or building holocrons (which are basically force-based computer hard drives) when the user is in a meditative and secluded state.

It’s possible to control the trajectory of objects very carefully through the Force, as seen, for example, when younglings construct lightsabers:

Because of this, it is absolutely possible to manipulate a lightsaber using the Force. For example, Yoda makes his lightsaber float in the air and move around (he also turns it on without touching it).

It is even (likely) possible to use such a remote-controlled lightsaber in combat. This may have been demonstrated by Darth Vader in Star Wars #2 . He grabs a poorly-trained Luke’s lightsaber from his hands using the Force: 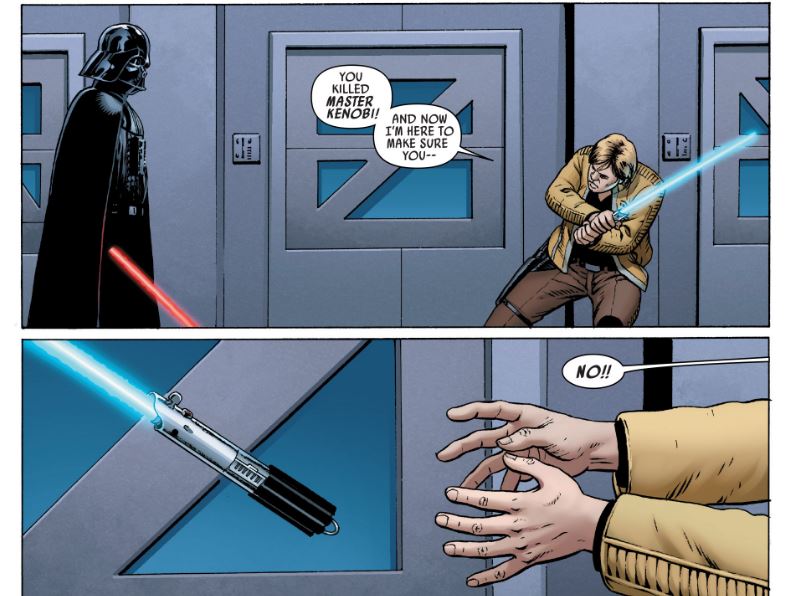 He then proceeds to use telekinesis to control it, making it float in the air in front of him: 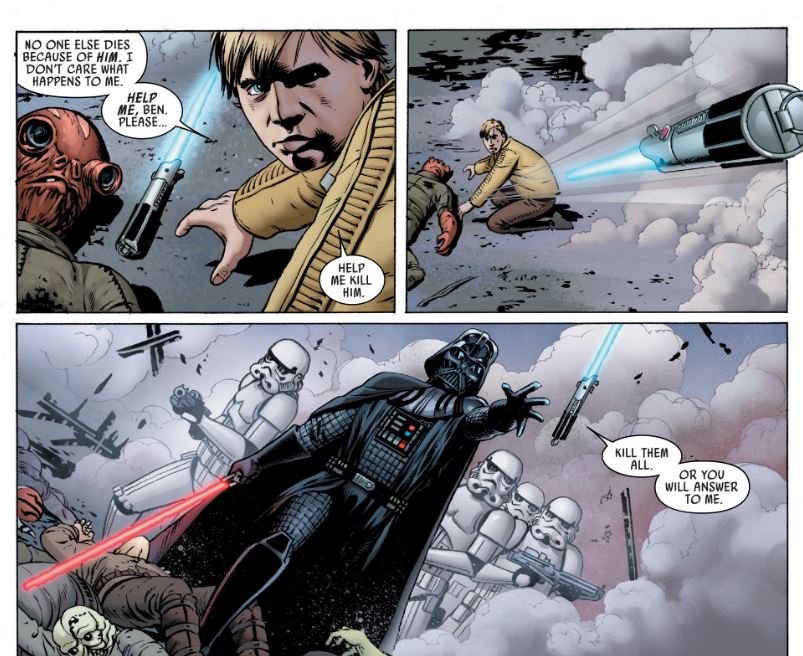 And apparently to slash at someone’s face remotely: 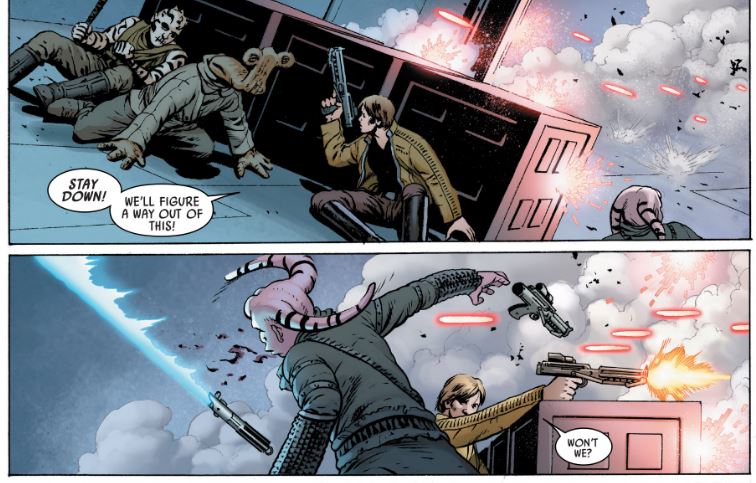 It’s admittedly hard to tell whether he’s controlling the saber remotely, or simply throwing and retrieving it with great accuracy, but it certainly looks like the former.

As to why people don’t usually use this in combat, it’s simply that using the Force to control a blade takes more effort than using one’s hands. It’s like asking whether someone could attach a lightsaber to a polearm for greater reach: they could, but it would make the weapon harder to use. Especially given that using multiple lightsabers doesn’t seem to confer an unmitigated advantage in lightsaber-on-lightsaber combat (see: General Grievous), this would be an unnecessary exertion in combat with another Force-user. If, on the other hand, one is fighting a bunch of ordinary people and a very untrained Jedi, as Vader is, this might be a nice way of making ranged attacks.

Powerful and very skilled Jedi can do that, but the amount of focus, control and energy expenditure to accomplish this is not worth it in the heat of combat.

Something like that can be used as a distraction here and there, but you still won't get the same kind of control as you would when controlling the saber with your hands.

In Star Wars, the very small and the very large require great amounts of control and power to manipulate.

In the book "Heir to the Empire", Leia was awaken early in the morning as she sensed something was bothering Luke. When her assistant "Winter" came in to check on her, she reached out with the force in an attempt to turn the light switch off.. but she was unable to do so as she did not have enough fine control over the force.

She was able to move larger objects such as bracelets or her lightsaber and other regular sized objects. So it takes a greater amount of focus and concentration to move objects as small as pebbles, light switches or the like.

This was also mentioned later in the same "Thrawn series" book "The Last Command" where Mara Jade was being buried by smalls rocks and pebbles by the insane Jedi Master Clone Jorus C'Boath. She tried to reach out with the force to move them but there were too many for her padawan level skills and again, they were too small.

Of course Yoda lifting Lukes X-Wing is probably one of the most amazing examples of force telekensis ever shown. Not only for the sheer amount of power required, but because he had the ship floating with absolute perfect control and grace, lifting it effortlessly out of the Dagobah swamps and onto the ground with perfect, slow, minute control from start to finish. It was a truly mind blowing display of incredible Jedi mastery that even today still amazes me even after watching that scene well over 1000 times...literally.

So the smaller the object, the greater the control required and during combat, it's simply not worth the expenditure and focus risk to manipulate so many sabers at one time.

In the video game Jedi Knight: Jedi Academy, the main character Jaiden, when wielding two lightsabers has a move where he crouches, lets go of his lightsabers and they swirl around him.

Not the answer you're looking for? Browse other questions tagged star-wars jedi the-force sith lightsaber or ask your own question.

8
Can the Jedi manipulate electronics?

27
Why can't a Jedi or Sith control something sliced with a lightsaber?
14
Can Force Ghosts Interact With the Physical Environment?
108
Why Do Jedi Use One Lightsaber in Combat?
27
Why didn't the Jedi/Sith use Force pull/push in the generator complex?
18
Could several Jedi peacefully overpower one Sith opponent through nonviolent Force techniques?
47
How is it possible to do round swings with a lightsaber?
11
Was it illegal for a non-Jedi to use a lightsaber in the Republic?