What are the Q incapable of doing?

The Q appear to be a race of beings with unlimited power, unified as a single continuum, but powerful enough nonetheless to shape the universe individually.

Yet they seem to have limits - limits that they say Humanity could one day surpass, and limits that allow them to struggle against other powerful foes.

What limits are there to the power of the Q?

Note: There are certain things the Q forbid each other from doing - antagonizing the Borg, breaking off from the Continuum, and other things I am sure, but these are things they should not do, not things they can not do.

I am looking specifically for the latter: things they could not do even if they wanted to and had no restrictions from the Continuum.

Within the TV canon, The Q actually seem pretty limited as supposedly omnipotent beings go. On several occasions we see them die or suffer serious injury, make serious errors of judgement in predicting the intentions of 'lesser beings', they can suffer from evident depression, they're capable of removing each other's powers (when acting in unison) and generally they lack a sense of decorum and politeness.

On top of that, they're identified as having a limited IQ (albeit one far in advance of the average human) and a penchant for petty and vindictive acts of aggression. Q claims that the Q act out of a sense of "Superior Morality" which frankly no-one could possibly accept as true.

As regards their own perceptions of their weaknesses, we can see it in their own words;

QUINN: But you mustn't think of us as omnipotent, no matter what the Continuum would like you to believe. You and your ship seem incredibly powerful to lifeforms without your technical expertise. It's no different with us. We may appear omnipotent to you, but believe me, we're not.

TUVOK: Intriguing. Just what vulnerabilities do the Q have?

QUINN: Always looking for the tactical advantage, Mister Tuvok. Very good. As a matter of fact, that's why I've come to see you. In a way, our vulnerability is what this is all about. As the Q have evolved, we've sacrificed many things along the way. Not just manners, but mortality, and a sense of purpose, and a desire for change, and a capacity to grow. Every loss is a new vulnerability, wouldn't you say?

Within the Trek EU canon, we see their limitations extremely clearly as Q (or other Qs) are variously trapped in the past, forced to re-attend Q university, turned into statues, turned into swords, turned into pure energy, forced by their peers to mediate planetary disputes, forced to marry Lwazana Troi (shudder) and generally treated as the comic relief in a whole host of comics, books and radio-plays.

In the IDW comic series "The Q Gambit, Part 6", we learn that the Q in fact share their "extra-dimensional space" with the wormhole prophets. After the Pah Wraiths take control of the wormhole, they begin to threaten the Q themselves. 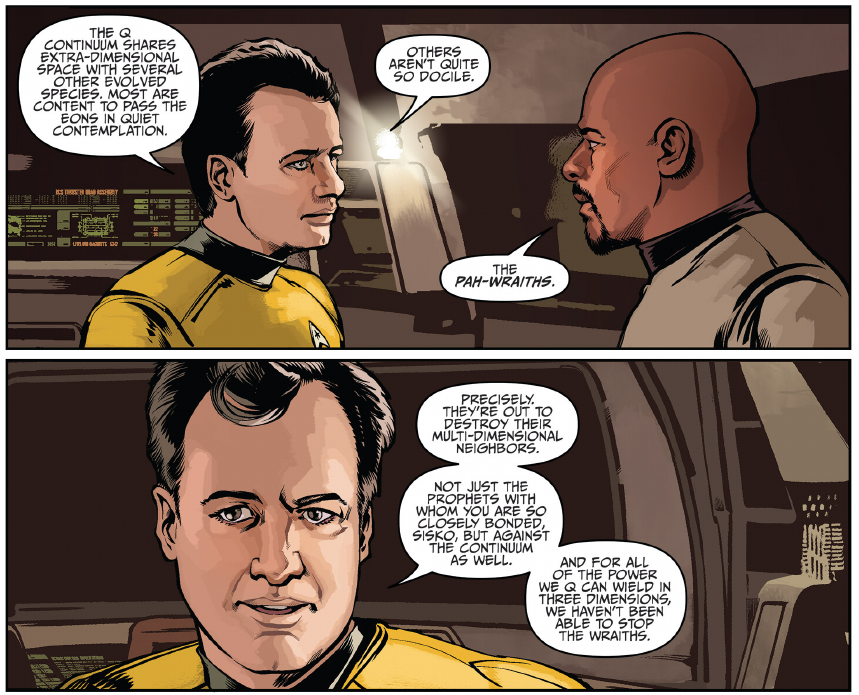 This is a very subjective question, since you're asking for an answer to something that has never been answered canonically. Any answer would be a product of opinion and conjecture based on the content of the episodes and the spirit in which the viewer takes the byplay between the Q and the humans they interact with.

With that in mind, I think their biggest limitation is understanding. They are all KNOWING and all POWERFUL, but they lack the ability to understand sometimes simple concepts, perhaps showing a lack of actual "life experience".

My basis for this is as follows: when our favourite Q was made mortal in Deja-Q, he struggled to understand the simple concept of selflessness, and couldn't initially understand why Data almost sacrificed himself to save him. New Q (the one played by Corbin Bernsen in the same episode) commented on the limitations of the human form but showed SOME understanding of compassion.

They seem to be created as functioning adult entities but with a childish mind and attitudes. Humanity's greatness (in relation to the Q) is that humanity has built on what it has learned and developed socially as well as intellectually, and in that has far bypassed the Q - that's why Q keeps coming back to Picard and Janeway: to learn and to increase his learning through his human teachers.

It's possible their ability to do things will / can increase as the individual Q ages intellectually. So maybe the older and more wise the Q becomes the more he/she discovers about his/her power and the more can be done.

Not the answer you're looking for? Browse other questions tagged star-trek star-trek-q or ask your own question.

15
Are the Q and the Douwd aware of each other?

29
Of all the threats in the galaxy, why the Borg?
29
Why don't Starfleet Officers wear protective gear when going abroad?
36
Why was the Defiant so small?
9
Why didn't the Enterprise crew use photon grenades against the Borg during hand to hand fighting?
9
Why don't the Borg use shields or a cloaking device?
3
Why doesn't Federation mandatorily always use “Signal Jammer” against the Borg?
14
What is Guinan?
4
What are non-Q species actually doing in the Q Continuum?
9
Was Geordi and Data's “invasive program” to annihilate the Borg ever attempted again?
8
What exactly are Romulan interests in the Borg Reclamation Project?