Is the Arc Reactor made from the same material as the Tesseract?

Are they, the Arc Reactor and Tesseract, made of the same material?

(I haven't found any concrete theories about this).

My understanding is that the active component of the Arc Reactors seen in Iron Man (e.g. ignoring the casing made of steel and glass and the electrical components within) is Palladium and latterly Vibranium.

By comparison, the "infinity stone" (AKA the Tesseract) is one of a set of Gems (or Crystals) comprising the remains of an entity known as 'Nemesis'. While the actual element of the crystals are not described in-canon, I think we can be pretty sure that it's neither Palladium nor Vibranium since both are opaque metals in their crystalline forms.

What may be causing the confusion is that both artifacts seem to create the same sort of blue energy that seems common in recent Marvel features. 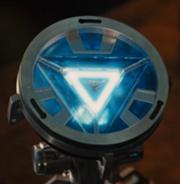 Not the answer you're looking for? Browse other questions tagged marvel marvel-cinematic-universe iron-man or ask your own question.

22
What element saved Iron Man from his blood poisoning?

58
Why did Tony Stark build arc reactors into his extra Iron Man suits?
18
Why did Tony Stark become lethargic when his arc reactor was removed?
53
Couldn't Tony Stark cure his palladium poisoning by taking the ARC reactor out of his chest?
28
Why did the Iron Man suit and ARC Reactor stop working in Avengers?
15
How does Iron Man's Arc Reactor work?
7
In Iron Man, when Obadiah removes the arc reactor, why does Tony start to bleed from around the socket?
16
Iron Man 2: The purpose of Tony's chest reactor?