In what show did a man travel back in time whenever he heard ‘Do It Again’ by The Kinks?

I am trying to remember the name of a TV show from the 90s.

The story is fiction - a man travels back in time every time he hears The Kinks’ song ‘Do It Again’, which may have also been the theme song.

But for the life of me, I cannot remember the title.

I believe this was a short-lived series 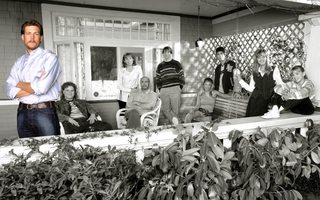 Per the blurb on Wikipedia:

The series starred James Bulliard as Travis Glass, a 30-year-old who finds his life in a rut. Still living at home with his mother (Bess Armstrong) he works as a door-to-door salesman. The girl of his dreams, played by Kiele Sanchez, is married to his older brother, Gregg, played by Brad Raider. Travis is able to trace his life's downward spiral to a single week in high school in 1988. After telling his best friend, played by Tyler Labine, that he wished for a second chance to make everything right, he lies in bed listening to the song "Do It Again" by The Kinks, when a bolt of lightning hits his house, and an electrical jolt sends him back to that week in 1988. Glass tries to correct things that originally went wrong, but finds his new life isn't quite to his expectations, and must return from the past.

That Was Then was cancelled after only two episodes.

8
What 90s TV show had the protagonist travel into the past using a sword?
12
What novel had a time travel car and dinosaurs?
5
Man with saucer shaped machine that may or may not been a time travel machine
7
Man goes back in time to observe WW2 and gets stranded in an alternate future
11
Identification of mid-80s time travel tv show
12
Man goes into murderous rage whenever he hears name of his lover's killer; friend clones the dead girl