Was that random Orion Girl a spy in Star Trek 2009?

In the Star Trek 2009 movie, early on, we see Uhura discover that Kirk has had an intimate moment with an Orion Girl during his time at Starfleet Academy.

But if I recall correctly, the Orion Women all generate a pheremone that makes men fight for their attention, and infiltrate societies by posing as slave girls.

So is this random Orion Girl a spy for the people of Orion?

It appears it was actually the other way around, in that (according to Memory Alpha) Kirk was the one trying to hack into her systems:

According to writers Roberto Orci and Alex Kurtzman, Gaila worked in the computer lab, which is one of the reasons Kirk was interested in her. Kirk became involved with Gaila to gain access to the computer for the Kobayashi Maru simulation. In a scene deleted from the final cut of the film Star Trek, Kirk sent Gaila an e-mail which launched a virus into the simulation computer containing his "cheat patch", allowing him to beat the scenario. [1] During Kirk's hearing, Gaila is clearly visible in the audience, with her arms crossed at all times; in the DVD audio commentary for the film, this was stated to be a holdover from the previous scene, as she is quite upset with Kirk for using her in such a way.

Also in that article (and possibly more relevant):

Screenwriter Roberto Orci said Gaila could have escaped the life of an Orion slave girl because "there's an underground railroad and some of the Orion slave girls got out and they were sold to freedom." [2] This might be seen as contradicting a depiction of Orions established in the Star Trek: Enterprise episode "Bound", wherein Orion women use pheromones to manipulate humanoid men.

No, she was just another of Kirk's sexual conquests. She's probably not a spy for the Orion Syndicate, assuming it even still exists.

Apparently, in the Abrams-verse (Star Trek: 2009, Star Trek: Into Darkness) the people of Orion are already members of the Federation and training at Star Fleet Academy. 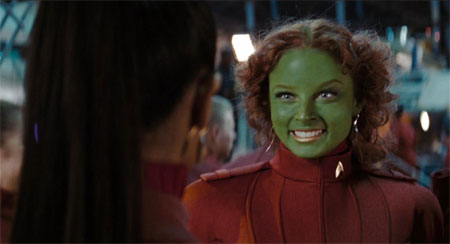