Are the kids from Captain Planet actually the Magic School Bus kids?

Firstly I apologise if this isn't really the right place to post this question but it was the best place I could think of.

I've seen this meme before around the internet for years but I just wanted to know if it was purely coincidence or if the design of the characters between the two cartoons actually had any relevance?

All 5 characters match the same race and gender and that seems like too much of a coincidence. There must be some reason, if only subtle for why they match EXACTLY? 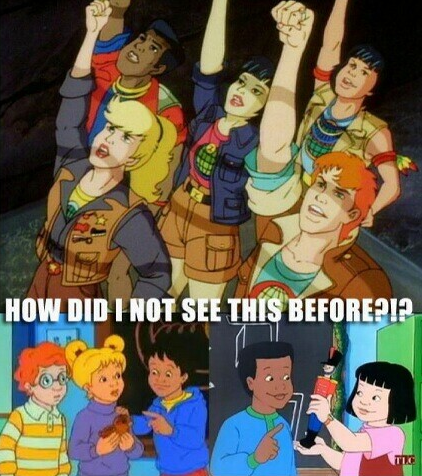 No. The Planeteers never knew each other before being summoned by Gaia.

In the very first episode, you meet each of the Planeteers on their respective continents. There are numerous references to their backgrounds throughout the series, and it is never established that they went to the same school as children.

As for the similarities, the producers may have done it on purpose, however its more the case they were both going for a diverse group of people.

Any other similarities are coincidental as Magic School Bus and Captain Planet were produced by different companies.

Not the answer you're looking for? Browse other questions tagged captain-planet the-magic-school-bus or ask your own question.