Can free humans tell if they are in the Matrix?

Can any of the "free humans" tell if they are in the Matrix or not? Does it feel different? Or is it only context (like if they remembered being put in there, or see familiar Matrix cities, etc.)?

Yes, they can tell;

The "Splinter in your Mind"

Morpheus describes the experience of being inside the Matrix as

"something wrong with the world. You don't know what it is, but it's there, like a splinter in your mind".

This is down to the tension between (subconsciously) knowing that something is odd about the world but being unable to actually pin in down. It follows that someone who knows what the Matrix is, would instantly spot the unreality of the situation.

When Neo learns Kung Fu, it becomes very apparent that the physical model used inside the Matrix (and the sparring construct) doesn't operate in the same way that it works in the real world. Skilled fighters are able to move at speeds that simply defy common sense, slow down time and sense attacks before they occur. Neo and the other specials are also able to consciously bend the rules by simply thinking about them.

It follows that you could tell that you were inside the Matrix if you were able to use these special abilities.

The very essense of Zion is that free humanity is comprised of those who've rejected the Matrix. The architect describes how the the Oracle

"stumbled upon a solution whereby nearly 99.9% of all test subjects accepted the program, as long as they were given a choice, even if they were only aware of the choice at a near unconscious level."

Again, it follows that unfree humans need to subconsciously accept the Matrix in order to be fooled by it. Free humans, when offered the same choice simply reject the Matrix as unreal. We also learn that older versions of the Matrix (which were alternately heavenly and hellish) suffered even worse levels of rejection. Smith points out that people kept "trying to wake up from it".

Sometimes you can see the code

On several occasions, people in the Matrix (both free and unfree) see the base code. Neo in the Matrix, Dan in the Animatrix short film "World Record" and Dez in the Matrix comic "Sweating the Small Stuff" all see the matrix without the filter of the 'image translators'.

Although it seems to be a relatively rare occurrence, it would be immediately obvious that you were inside the Matrix if you saw code. 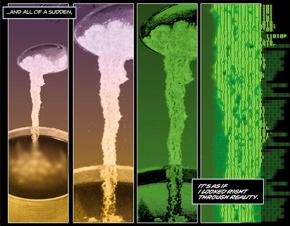 When you enter the Matrix, your appearance seems to be created by something called a "Residual Self Image", something that Morpheus describes as the

"mental projection of your digital self"

For many people (like Mouse and Trinity) this change is relatively small, such as removing bioports but for others far more dramatic. Reportedly, in the original Matrix script Switch was intended to be portrayed by two characters, one male and one female and in the Matrix Comic "Burning Hope", the titular character is able to change her appearance seemingly at will (from that of a little girl to a large muscular man).

Check for the port in your neck.

I am assuming that when you are in the matrix, your 'avatar' does not have the neck port used when outside of the matrix to jack-in.

phantom42 found this image of Morpheus in the matrix, that does not show the port

6
How did Neo know that the “reality” Morpheus told him was the real world was not actually just another simulated reality?
46
How do people in the Matrix develop a residual self image that resembles their own body?
16
How could the humans have rejected the program if they had no choice?

20
How do Machines Breed Humans in “The Matrix”?
8
Why Do the Machines (in The Matrix) Have to Maintain the War With Humans?
3
Is the One just a prophecy for “free humans”?
6
If Morpheus and Neo were driven by free will, why did they follow the Oracle's advice?
22
Do people in the Matrix have a free mind?
162
Why did the Matrix simulate 1999 instead of a pre-computer year?
31
Can a free born human be given ports by humans?