What modifications were made to the Tiger Moth by Brains?

At the end of Thunderbird 6, we learn that the new Thunderbird is in fact a Tiger Moth. But surely some alterations would have been made to it. Does anyone know of any of Brains' modifications (and I mean besides the paintwork!) 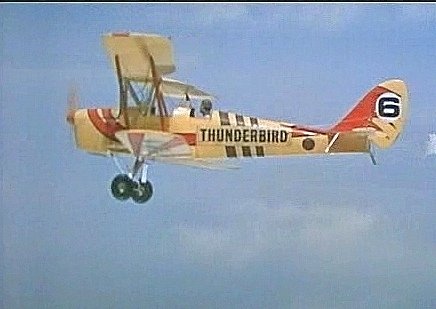 It doesn't look like there were any modifications made to the aircraft, either in-universe or out-of-universe (aside from the obligatory upgrade of safety features).

" [my transcript]It was felt that we'd done the one with the hardware, and we now wanted to do something that was amusing. Up came this script with a Tiger Moth in it, which was as far removed from the hardware that was in Thunderbirds as anything I can think of.

You know, it was just an old bi-plane from World War I."

At the end of the film, the plane is redesignated Thunderbird 6 (complete with new paintjob) but then never appears in any other films or shows.

The most obvious suggestion is that this was intended to be an International Rescue "family-joke", basically making the plane a team-mascot.

7
In Thunderbirds, what is the badge on Parker’s cap?
5
What were the plans for future thunderbirds episodes?
3
What was the point of Fireflash's engines lasting so long?
3
What happened to Jeff Tracy's wife?
1
What aspects of Thunderbirds (2004) did Gerry Anderson dislike?
6
What did Thunderbirds use as a fuel source?
5
What is the significance of the colour of the sashes the Tracy boys wear?
5
What is Thunderbird 5's color?
0
Was the song for the Thunderbirds end titles originally 'Flying High'?
2
What equipment do the Thunderbirds carry?