Dark energy and matter in the Star Trek Universe?

Considering that it is currently one of the biggest topics in astrophysics at the moment, I was wondering whether anything in the Star Trek universe had anything to say on this matter (pun intended). Are there any references to Dark Energy and/or Dark Matter in the Star Trek Universe (2009 reboot universe included) and, if so, are there conjectures made about the nature of either? Canon sources are preferred, but non-canon are also accepted.

Not in the reboot, but there are references to dark matter in the various series:

There is no mention of dark energy AFAICT.

Another answer here gives a thorough listing of references to dark matter in Star Trek, and is correct that no apparent references are made to dark energy in the television episodes or films.

There is a reference to dark energy, nevertheless, in The Physics of Star Trek by Lawrence M. Krauss, a theoretical physicist at Arizona State University. (The book's foreward was written by Professor Stephen Hawking.) 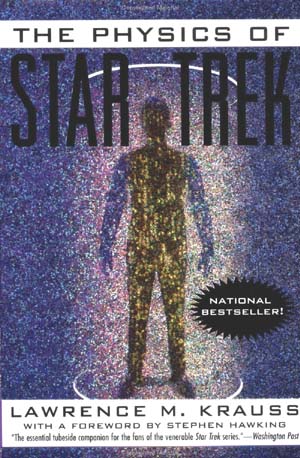 We currently have no idea whatsoever why this dark energy is out there, or what its origin is...there is no way it could be harnessed to do any useful work like transporting spacecraft around.

However, ignore for the moment the potential obstacles...

He then goes on to explain how one might use dark energy to "create and sustain the exotic matter and energy" required for propulsion in the Star Trek universe.

No. Plain simple... No. There's no reference of Dark Energy and Dark Matter in Star Trek reboot (movie or comic).

Not the answer you're looking for? Browse other questions tagged star-trek star-trek-eu or ask your own question.

13
Do the Star Trek Transporters use Energy or Matter?
10
Do parallel realities take precedence over time travel in the Star Trek Universe?
4
Are the Borg considered 'living' within the Star Trek universe?
16
Why are Star Trek ships (mostly) built by hand?
20
Which ship has the most prolific "recurring" role in Star Trek?
10
Do the post-Nemesis Star Trek novels reference the destruction of Romulus?
2
Could a starship's impulse engine reactor produce enough energy to power the warp drive?
11
Why did they make another prequel?
4
Which Star Trek species has had the longest real-world gap between canon references?