How wealthy is Uncle Scrooge in the Don Rosa/Carl Barks universe?

I'm particularly interested in these two writers because Carl Barks was the original, while Don Rosa innovated heavily while intentionally staying very true to the original.

Scrooge frequently makes remarks on his wealth: it is Five multiplujillion, nine impossibidillion, seven fantasticatrillion dollars and sixteen cents according to The Life and Times of Scrooge McDuck. Unfortunately, we have no idea what that means in real life.

There have been several attempts at estimating his wealth. Forbes claims that McDuck compares his wealth to 21.4% the value of Fort Knox, arriving at an estimate of $44.1 billion. Unfortunately I'm unable to find the source for this quote.

On the other hand, this article estimates the volume of silver in the money bin and arrives at an estimate of $27 Trillion. However, it is limited by the way in which it doesn't account for Scrooge's treasures, businesses and external investments.

EDIT: Many thanks to user14111 for pointing out errors in calculation in the second link

A magic hourglass causes him to lose a billion dollars a minute. He opines that he'll be bankrupt "in 600 years" at that rate. The math from that point is quite simple.

This of course doesn't take into account any interest charges, ongoing investments (he's known to own a railway, goldmines, silver mines, shipping lines, etc etc) or guaranteed income from bonds and certificates, nor does it take into account that this is more than the combined net worth of all worldwide currency, assets and infrastructure. 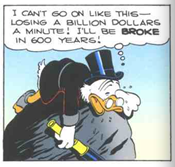 Personally, I don't only believe Barks and Rosa (I think ALL the Disney Comics are in the same continuity), so I could answer you that in the first places the calculs of what quantity of money the Money Bin may content is wrong, because some comics by Marco Rota and Romano Scarpa (and maybe others) show that Scrooge owns many different Money Bins, the one on the Killmotor hill being only his oldest one, and the one where he lives.

But if you want to be only based on Barks and Rosa, then the answer is: impossible to know because Rosa says in Crœsus's treasure that Scrooge gets richer every seconds. So, the answer will be that : it depends from which minute of Scrooge's life you count ! And the silly numbers like "Five multiplujillion, nine impossibidillion, seven fantasticatrillion dollars and sixteen cents" are only that because Scrooge is so wealthy that he has to invent new numbers (actually, there is no word beyond Quadrillion. Oh, maybe "Zillion" in french, but it's only half-official.

Not the answer you're looking for? Browse other questions tagged disney ducktales or ask your own question.

34
Identify a comic where Scrooge McDuck was protected against a beam because he went swimming in his money
5
Why isn't Gladstone Gander richer than Uncle Scrooge?

14
How did Mother Gothel know (or work out) the 'Flower Song'?
17
Are Darkwing Duck and Ducktales set in the same universe?
16
How come the Beast in Beauty and the Beast was unknown to the villagers?
165
How can Scrooge McDuck dive into money without hurting himself?
5
Why isn't Gladstone Gander richer than Uncle Scrooge?
6
In the Duckverse, do we ever see any other creature besides Scrooge successfully swim in money?
33
Does Mickey Mouse exist in the Ducktales universe (Or even the general Duckverse)?
1
Does the Mickey Mouse universe ever acknowledge non-Disney owned characters?
7
How did Alice return from Wonderland the very first time?