The Matrix: Are Agents “Mortal” or “Immortal”?

I haven't watched the 3rd Matrix movie yet, but there is no need to refrain from revealing potential "spoiler alerts" in any answers if they can answer the question.

In the first two movies, all fight scenes depict the Agents as unbeatable. They defy the laws of physics, never tire, move at superhuman speeds, etc. It seems impossible to beat them (except where they fight Neo, the One). However, if someone shoots the body (like when Trinity shoots the helicopter pilot) the Agent leaves the body, which reverts to its original form.

Are the Agents indestructible or not? Do they make the body they possess become superhuman and immune to all wounds aside from fatal ones?

No, Agents are most definitely not invulnerable. In the films we see that Agents can be shot and killed. A good example of this is where Agent Jones is dispatched with a shot to the head in the excellent "Dodge this..." scene.

We see that they can also suffer non-mortal wounds in the Matrix comic "Day In, Day Out" (where an unnamed Agent loses his arm to falling glass) and "Reloaded" (where Morpheus cuts an Agent's face with his sword). 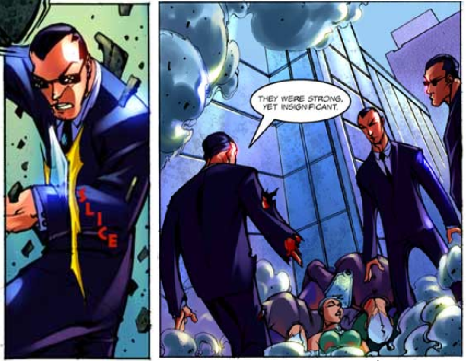 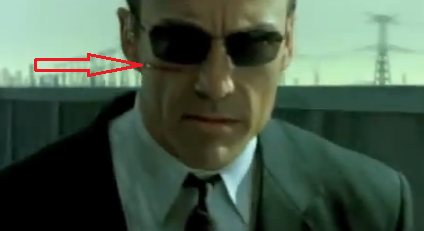 Yes, when a human is taken over by an Agent we see that their strength, agility and speed are instantly amped up to superhuman levels. This seems to include the amount of physical impact trauma they can receive. A good example would be in the Subway Fight where Smith punches through solid concrete without damaging his knuckles.

The short answer to this one is yes. Whilst there's no canon evidence that the Agents are or aren't susceptible to mundane ways of dying (such as illness and old age) I think we can be reasonably certain that they would be.

In terms of violent death, a few seconds after Agent Jones is dispatched on the roof (courtesy of a bullet to the head) he turns up again, having possessed a new human body. If they can discarnate and reincarnate at will, for all intents and purposes they are immortal.

Every time you've heard someone say they saw a ghost, or an angel. Every story you've ever heard about vampires, werewolves, or aliens, is the system assimilating some program that's doing something they're not supposed to be doing.

Although the Oracle does not explicitly mention Agents in this quote she does suggest that the Matrix as a whole has methods of dealing with rogue programs. The biggest threat to an Agents continued existence might not be the rebels of Zion, or even the powers of the One, but deletion for dereliction of duty.

Even loyalist programs would potentially be vulnerable as we know from Agent Smith's dialogue when he tortures Morpheus and from the Architect's explanations that periodically new versions of the Matrix have been designed to address inherent weaknesses in the system. While some older programs end up in the Merovingian's entourage we are not told what happens to other programs that suddenly find themselves surplus to requirements during a reboot.

They are immortal to a point. An Agent cannot be deleted as a result of combat (except perhaps in rare situations like Agent Smith) because an Agent can simply exit the body it is using when "killed".

But that doesn't mean an Agent can never be deleted. At the beginning of The Matrix Reloaded Neo comments that the Agents he encounters are "upgrades", which implies that Agent programs may be replaced eventually. Since we do not see Agent Brown or Agent Jones from The Matrix in any of the sequels, it is likely that they were replaced with the upgraded Agents Johnson, Thompson, and Jackson. As explained by the Oracle to Neo in the park (before the Burly Brawl), obsolete Agents like Brown and Jones were probably required to return to the Source for deletion or go into exile.

Here's another perspective on the headline question.

Agents need a host body to exist. Therefore if you eliminate every potential host body they cannot exist. Kill every blue pill and there will be no more agents.

Therefore they cannot be considered immortal.

You can also make a similar argument based on the matrix itself. Destroy the matrix once and for all and there can be no more agents.

If they are programs, then surely they just backup from a saved restore point. And maybe they are constantly saving. So you'd have to delete the actual saved back up somehow.