Movie where a girl taken to a hospital, they discover her blood is blue, neighbour old lady is an alien

I saw this movie as a kid in the late 80s or early 90s. In it, a girl wants to go to a concert but her mother won't let her. They are just moving into a new house. She sneaks out and gets hit by a car. In the, hospital they discover her blood is blue and she has 2 hearts (or maybe just one but on the wrong side?). The next door neighbour is an old lady who turns out to be an alien sent to protect the girl or something like that, I think a spaceship picks her up at the end.

The movie is called The Distant Home 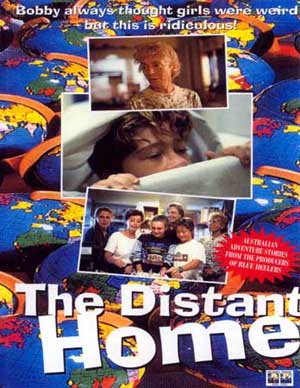 Jim and Maria Harrison are an ordinary couple living in an ordinary suburb. The only extraordinary thing about them is that their daughter Sally is about to become ruler of the galaxy.

The Harrisons were expecting their first child. On the way to the hospital the weather was strange, the electrical system of the family sedan failed, and when their child is born, it was unexpectedly twins, a boy and a girl, Bobby and Sally.

What the Harrisons did not know was that the leader of the Galazy Empire was also pregnant at the time. As there was a war between the Empire and the Confederacy, to safeguard the Empires child, it was implanted in Maria's womb and left up to her to raise.

Twelve years pass and the twins have grown up, but the time has come for Sally to return to her real family, and rule as she was meant to. Unfortunately she is knocked over by a car while riding her new bike and is taken to hospital where it is discovered that she is an alien. With the government involved, Sally is unable to return to either family until the Harrisons make plans to rescue her and return her to her real mother and fulfill her destiny out among the stars.

7
Movie identification: a girl who grows up very fast

7
Looking for YA horror anthology from late 80s/early 90s
9
Children's Science Fiction Novel: girl from future visits ancient humans, boy believes she is a magical spirit
6
90/80s young adult sci-fi tv show: young girl turns out to be alien princess (or some such)
10
Looking to identify a book, Earth is in trouble, girl sneaks aboard a spaceship
8
Book where a girl is left with grandmother and discovers she's a clone
8
YA book about a girl with multicolored hair who possesses some kind of power