As far as I've seen (TOS and first seasons of TNG), only six people can beam elsewhere from the ship (as there are six pads). It seems that this limit doesn't apply vice versa: (TOS: Day of Dove, TNG - one of the episodes in 1 season), more than 10 people can be beamed up. Is there any logic behind that? What is the real capacity of the transporters?

Normally the transport buffers are used to move people in groups of six but if the need does arise, there are three transporter rooms (each with six buffers), four cargo transporters capable of moving 10 people at a time, plus a further six emergency transport stations each with their own set of 22 transport pads that can be used to exit the ship

The (semi-canonical) TNG Technical Manual specifically speaks to the question of maximum capacity, both beam-up and beam-down; 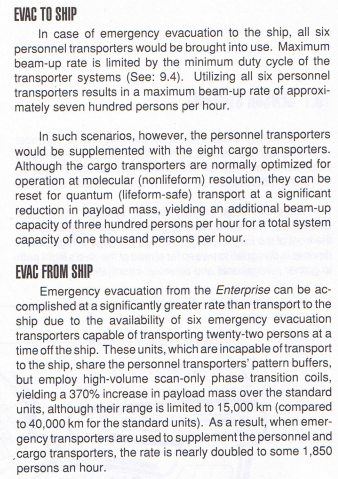 Not the answer you're looking for? Browse other questions tagged star-trek star-trek-tng star-trek-tos star-trek-transporter or ask your own question.

10
What was the largest object that the Enterprise-D could transport onboard?

11
Are Galaxy or Constitution class ships capable of landing?
14
Constitution Class in TNG era?
10
Warp entry visual effect
4
Transporter capability of Danube-class runabout
15
At what point and why does it become (almost) impossible to transport through shields in the Star Trek Universe?
16
Was the use of Klingon ships by Romulans ever given an off screen explanation?
11
Why aren't transporters used more often in Star Trek Enterprise?
12
How did the transporter malfunction in “Star Trek: The Motion Picture”?
8
Escape Pods on the original Constitution-class