When did using a fireplace as a portal first become used?

When did the idea of using a fireplace as a portal first become popular?

I am looking for any indication from writers, perhaps through interviews/posts where SciFi writers have explained the concept as to why a fireplace is used for such a portal - and what was the first popular example of such a portal. Aside from the stories about Santa Claus, my thoughts are that J.K. Rowling really brought forward the idea in the Harry Potter series (1997).

In Harry Potter, wizards and witches use Floo Powder to travel through the Floo Network.

In Doctor Who ("The Girl in the Fireplace", 2006), the Doctor, Rose, and Mickey land on what appears to be an abandoned spacecraft in the future. Throughout the ship, the Doctor and his companions find several "time windows" that allow them direct access to 18th century France. One of the two-way windows is the fireplace, through which the Doctor and Mme. Pompadour can clearly see one another. The Doctor can use the fireplace, along with other "time windows" to travel between his time (on the spaceship) and Mme. Pomadour's 18th century France. The fireplace is the last remaining time window after all had been supposedly shut off. 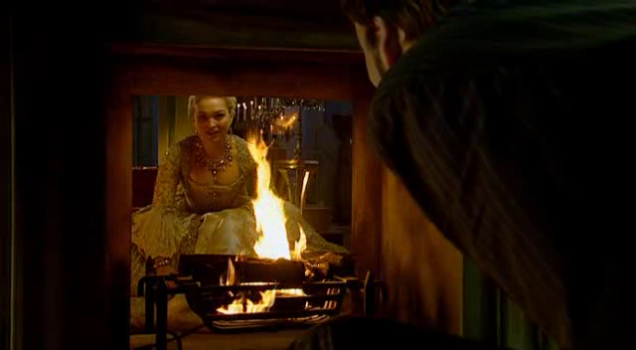 There was a short story I remember reading when I was younger, there was a man inside of a fireplace and much like when at a bookcase and pulling a certain book to make it revolve, he pulled a lever inside and it revolved him into a what was described as a different time and setting.

There seems to be an established folklore belief in unnatural creatures which leave a house by way of a chimney, e.g. in Scottish tales of fairy changelings How to find out a "Fairy Changeling".

Traditionally these eldritch creatures just rush up the chimney and re-emerge... Somewhere Else. Perhaps that suggested the fireplace-as-a-portal to fantasy writers, who elaborated it into a more complicated system of transportation?

Mikhail Bulgakov in his posthumously published in 1967 The Master and Margarita made the attendants of Satan's Ball arrive through fireplaces.

As Hypnosifl pointed out in the comments,

In addition to domestic fireplaces, there are around a thousand fireplaces across Britain connected to the Floo Network, including those at the Ministry of Magic, and various wizarding shops and inns.

‘Floo’ came from the flue that you find on a chimney and don’t ask me to tell you exactly what a flue is, because I don’t know. I just know it exists, but I’m not sure what it does exactly. I needed a way for particularly young witches and wizards to travel around because I’d created the International Statute of Secrecy, which was inconvenient, so immediately that made it quite difficult for them to move around, particularly over long distances, by magical means. So I thought they need something very discreet, and that’s how the Floo Network came about, so it was a way of moving from house to house without ever being seen by Muggles. But it was fun and comical to have it a little bit difficult to use, so that you could easily make a mistake in where you ended up.

Santa Claus is said to come down the chimney and enter houses through the fireplace. When I was young, children would send their Christmas wish list to Santa Claus by holding it over the fire and letting the updraft carry it up the chimney. The fireplace was also where Christmas stockings were hung for Santa Claus to fill with presents.

According to this MentalFloss article, the story of Santa Claus coming down the chimney originated in a Washington Irving story from 1812. It also mentions earlier associations between fireplaces and magical beings. The only one that is dated is a theory developed by a 15th century French scholar that witches could enter a house through the chimney.

Not the answer you're looking for? Browse other questions tagged harry-potter doctor-who history-of or ask your own question.

20
Is Santa more than fiction in the Harry Potter Universe?

32
How did the Timelords give the Doctor New Regenerations without messing up the Universe?
4
Did Madame Kovarian originally come from when Trenzalore was under Siege?
11
Why didn't the Doctor use the TARDIS to return to Madame De Pompadour
2
Which Sci-Fi work introduced the idea of “Resurrection of Dead by Time Travel”?
27
Why didn't Sirius remind Harry about the mirror when he used Umbridge's fireplace?
7
Is it explained how a person can fit in a Dalek?
5
Why don't Hogwarts students use fireplaces to communicate, apart from owls?
12
Why didn't the Doctor become a vengeful God when he absorbed the Time Vortex?
5
How did the letters pass through the chimney if it was obstructed by the electric fireplace?