In his duel against Dumbledore, was Voldemort's shield magical or physical?

When Dumbledore and Voldemort duelled, Lord Voldemort countered Dumbledore's attack with a "silver shield". I'm wondering what the exact nature of this shield is. In other words, is the shield a silvery, more powerful, version of Protego, or is it a tangible, physical silver shield?

I think it is indeed a physical object but J.K. Rowling is sometimes ambiguous in her descriptions, so I would very much like to hear your interpretation of canon.

Dumbledore flicked his own wand: the force of the spell that emanated from it was such that Harry, though shielded by his golden guard, felt his hair stand on end as it passed and this time Voldemort was forced to conjure a shining silver shield out of thin air to deflect it. The spell, whatever it was, caused no visible damage to the shield, though a deep, gong-like note reverberated from it - an oddly chilling sound.

Order of the Phoenix, chapter 36

The way I read this passage, and J.K. Rowling's description (yes, she can be totally ambiguous at times -- agreed), is that the shield is a physical object that is protected with magic. So, both. Whether it was actual sterling silver, I don't know, but I think that would be a poor choice of metal because silver is so easily pliable.

Mainly I think it's a real shield because Harry could see it. Dumbledore's spell did no visible damage to it.

I can't imagine Voldemort's shield wasn't imbued with magic. I don't think just a piece of metal would have stood a chance of protecting Voldemort from the power of Dumbledore's magic. Dumbledore was too powerful of a wizard to have been stopped by a plain metal shield.

I think it is physical as well, given the wording of J.K. Rowling saying he "conjured" it. Conjuring as we know is a form of transfiguration that pertains to summoning a physical object from nothing, though as Slytherincess has stated it definitely magically protected. And I also agree that while it is colored silver, it is not actually made of the metal silver.

Based on the chapter art for the original "Order of the Phoenix" hardcover books (hand-chosen by JKR but not illustrated by her), I'm inclined to believe that it was a physical shield which was silvery in colour. 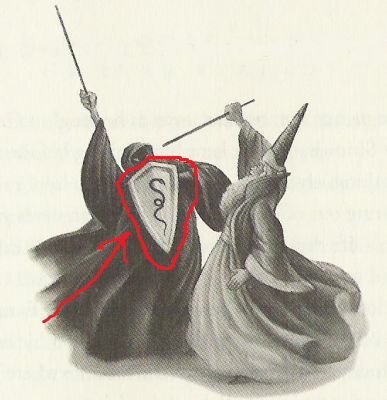 Note also that it was "conjured", again suggesting that it had more presence than a simple Protego spell.

Whether it's actually made out of metallic silver (a metal that does have magical properties in the Potter-verse) is not made clear.

Moving down the canon scale, you may also wish to note that the "Practical Defence Against the Dark Arts" textbooks in LEGO Harry Potter: Years 5-7 depict a large physical (silver/grey) shield on their cover. 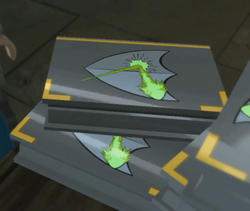 382
Why don't Muggle-born wizards use Muggle technology to fight Death Eaters?
5
Voldemort's physical presence pre-Goblet of Fire
8
How did Dumbledore discover Voldemort's Cave?
18
Dumbledore's mysterious curse against Voldemort
6
Are there any signs that the circumstances of Voldemort's conception influenced his magical abilities?
23
In the battle at the Ministry in OotP, why did the Centaur statue break but the Wizard statue didn't?
8
How do dark wizards control Dementors?