Film in which people can time-travel to relive the biggest world disasters; main character changes a destiny, saving many people

I saw a film about 10 years ago. It was about people that could live the biggest disasters in the world that had happened again. They could travel in time and see these disasters. There were some plane crashes, metro crashes, Titanic disaster and so on.

But one man (positive main role) saw another bad man who was throwing a coin in the air and this coin fell down. This positive role changed a destiny and saved many people. This saving caused some damages to negative roles in this film.

I believe the movie you are talking about is called Thrill Seekers (1999), it's also known as The Time Shifters. 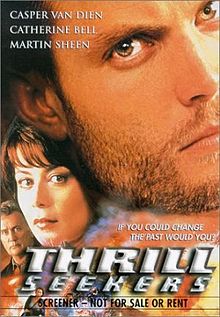 The wikia states this.

Tom Merrick (Van Dien) works as a TV reporter when he's nearly killed in an accident while informing about a fire in the Evanston power plant. After directing his crew to take another position he spots a creepy-looking man, causing him to stay behind. This accidentally saves his life as the crew is killed in the partial collapse of a building.

After some time, he decides to do some research on catastrophes for a documentary he's preparing when he accidentally stumbles upon several pictures of the man he saw at the power plant (Richings), who appears to turn up in different disasters (sinking of Titanic, Hindenburg disaster and hurricane Hugo) as far apart as 50 years, but who still looks the same in all the pictures.

As his boss Eleanor hopes for a good story she books Merrick a flight to Washington, D.C. to get the original photographs from the author. When on the plane, he again spots the man from the power plant disaster and checks his luggage. He finds a flyer and discovers a futuristic enterprise—Thrill Seekers—will make time travel possible in the year 2070 and will sell trips to the past. These trips consist of travellers going straight to a catastrophe right before it happens, so they can experience the emotion but are able to travel back in time again before they get killed.

The main character ends up using knowledge of future events to save people, including his own life.

Which is worse, Merrick finds out that the Flight 222 he is on will be involved in a mid-air collision, killing everyone on board.

Thanks to that knowledge, Merrick forces the pilots to change the course of action which saves a plane from crashing and killing hundreds of people. The mysterious man disappears before landing. Merrick is arrested by the FBI with the charge of plane hijacking attempt. Agent Baker is sure about the hijacking attempt while his younger assistant, Agent Stanton believes Merrick's story. However, Merrick's knowledge of the future disasters causes the changes in the future so the company Thrill Seekers sends two agents to the past to stop Merrick.

Not the answer you're looking for? Browse other questions tagged story-identification movie time-travel soft-sci-fi or ask your own question.

8
'90s time travel movie where the villain is seen in black & white photos, and is following people through time

5
Novel with random people in a cafe which time travel to the Dinosaur Era
11
Story set in the Middle East involving demons, sorcery, and someone implied to be Gilgamesh
6
Webcomic in which humans have animal powers; main character sets out in the world to find her missing father
7
Time travel in Doraemon - was the Stable Timeloop effect ever really adverted?
4
TV show about a group of people that travel through time to the past trying to identify an evil character
3
Movie where a group of people travel back in time to the age of the dinosaurs. A woman is kidnapped by giant spiders, which put eggs in her stomach