Long ago I used to watch a cartoon TV series which I almost forgotten. In that, a group of teenagers somehow ported to a magic world from an amusement park. There they needed to save themselves from dragons and an evil magician. Fortunately, they got awesome powers in that world. e.g. Toy bow/arrows became deadly and a girl was able to shake ground using her club. Their goal (other than survival) was return to own world.

Once they returned to own world using a roller coaster ride. The city was probably Tokyo (not sure). The magician and dragons also came after following them. Unfortunately, their powers stopped working in this world. The leader of the group (a blonde boy) run towards a telephone booth to call police, but he didn't had money. Not exactly in mind that he somehow called police or not. It's also not in my mind that police came or not (after call or seeing unusual activities). But, the magician and dragons were unstoppable. So, teenagers lured them by continuing their roller coaster ride and got trapped in the magical world again. And, their powers started working again.

Can you please identify the TV show? I want to watch it again.

It sounds like Dungeons and Dragons. The opening shows a group of multi-ethnic Americans being catapulted into a fantasy world via a roller coaster. 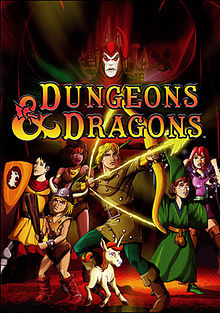 18
Magic is based on words of power, which series?
20
Earthlings create and interact with a pocket universe; universe inhabitants eventually desire to escape
6
Book (series?) with a protagonist discriminated against for having no magic, later revealed to have light-based (invisible) magic
24
Series of books featuring dragons, enchanted forests, magic swords, etc
9
Story about Angels in Revolution-era United States
6
Kids TV show combining live action and animation, kids fighting monsters after entering a photo booth
3
TV Show episode with a psychic baby looking for a father
9
Movie where people are trapped with no connection to the outside world but have food and water
7
The name of the book/series that had dragons coming back to the world