How did Brent Spiner get cast as Data for TNG?

According to this answer for who was a potential player for the role of Data, Brent Spiner was not originally considered for the role. I've checked on Memory Alpha, and there seems to be no information on either the "Data" page nor the "Brent Spiner" page for how he landed this role.

How did Brent Spiner get cast as Data? Did he crash the auditions like Robert Picardo? Or is there some other, more mundane story behind his casting in the role?

Rereading that answer and this interview with Spiner, it sounds like Spiner was just not one of the actors who were the suggested first choices by the creators/casting agency before they actually began auditions.

Brent Spiner, did however, go through what seems to have been a normal audition process.

Let’s go back to your TNG days. How quickly, or not, did you get a handle on Data and how to play him?

Spiner: I think fairly quickly because I realized pretty early on that there was really no precedent for it, that I could do pretty much anything I wanted and the audience would either accept it or they wouldn’t. But there was nobody to say, “Oh, that’s not what an android would do” or “That’s not how an android would behave,” because there weren’t any other androids at that point on weekly television. Even in the audition process, there was the question of, “Should we play this character like a machine, like a robot, or should we make him closer to being a person?” And we all agreed, finally, that it would be really tedious if I played him like a machine and a robot for seven years, if we went that long. So we decided to make him much more of a person who was growing in his humanity as time went on.

It sounds like despite the creator's initial choices, Spiner simply won the role with his audition. 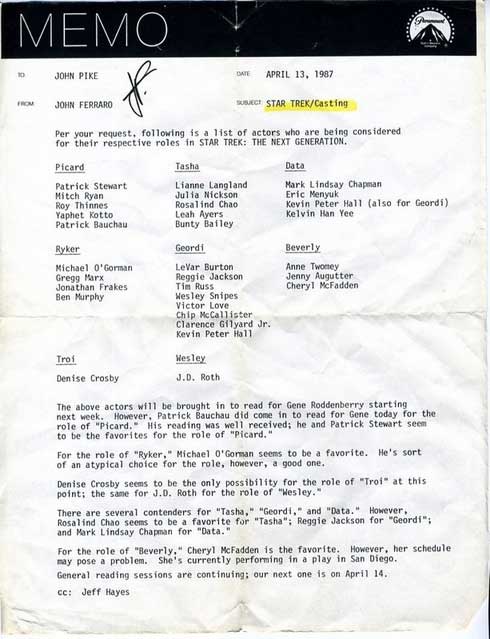 At this point in the intial casting, Brent Spiner had not auditioned yet.

46
Which actors were originally considered for the role of Data in the Star Trek: The Next Generation series?

22
Has Data ever made a joke intentionally (not involuntarily) in the TNG series?
38
How did Data get Spot?
11
How strong is Data?
40
Have Star Trek actors commented on why they didn't work more after Star Trek?
2
What was the original description and backstory for the character of Data?
3
Did Brent Spiner ad-lib this line from "Shades of Gray"?
8
Is there a Star Trek audio book read by Brent Spiner?