Mid-80s cartoon with 4-5 robots with "special powers" to zap things; had a scene with a kraken chase on an ice world

Does anyone remember a cartoon with 4-5 humanoid robots on Saturday morning in the mid-80s? As far as I can remember, they had "powers" to zap things and maybe fly but I don't remember much of the story/plot/enemies/powers.

I don't remember humans in the show.

One scene I remember was the were on some ice world and were being chased by this huge polar kraken type monster. They got cornered at the edge of this ice sheet and some water. One of the robots (the leader I guess) asked if someone had any power to do anything. They all looked at each other and one of the female robots said she did and zapped the ice sheet so they floated away from the kraken. However, since all of them ran out of power, they couldn't do anything except stand on the ice sheet and float in the water.

I don't remember anything after this scene, probably because my parents shut off the TV, or I'm just that old.

It's also possible I caught the re-runs of it, so it's possible it's late 70s or early 80s.

I think it's possible that the show you mentioned could be The Mighty Orbots (1984). 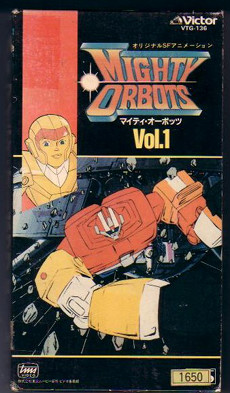 Bo the female robot looks like this and is described to have elemental powers.

Bo – One of the three female robot team members she is most outgoing, assertive and confident female on the team. Sometimes she likes to play practical jokes, but at times they can backfire (like when she removed Crunch's appetite chip, only to have it broken when they needed it in the episode "Trapped on The Prehistoric Planet"). She is a caring soul and will do what she can to support her team mates. She has the ability to manipulate the elements – fire, water, wind, etc. – to use in a myriad of offensive and defensive effects (whirlwinds, water geysers, etc.).

Bo's primary colors are pale yellow and orange. When forming the gestalt form of Mighty Orbots, she transforms in the left arm, which forms a hand after it is connected to the main body. Through her connection, she can channel her elemental powers throughout the body of Mighty Orbots. 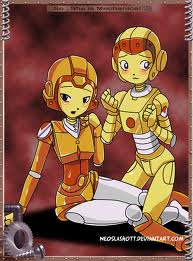 Not the answer you're looking for? Browse other questions tagged story-identification tv cartoon robots or ask your own question.

8
What late 80s - mid 90s cartoon had heroes with insect mechs?
3
90s/80s Cartoon with rebel helper robots resembling transformers?
5
80s anime cartoon with mechs
3
Kids TV show about 4 kids with elemental powers
13
80s Cartoons with three robots with "screen" heads one white, one yellow and one red
14
Sci-fi book in Cyrillic with a white monkey on a pedestal in a Martian landscape screaming a ray of ice
13
TV Pilot or Movie, 80s, misfit team with powers
24
1980s or 1990s animated film featuring robots or mechs, an abandoned city with skyscrapers, and a desert-like setting with a cliff