What is the significance of the Red Comet?

For a few episodes in the show, in Season 2, there was a heavy emphasis on this Red Comet that was falling from the sky. All of a sudden it was just sort of... not a thing anymore? 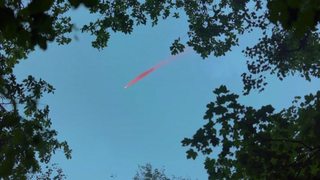 What is the comet's importance and where did it suddenly disappear off to?

Or was it really just a comet?

Note: I have not yet read the books so if it's explained in there, I'd still like to know about it.

There will come a day after a long summer when the stars bleed and the cold breath of darkness falls heavy on the world. In this dread hour a warrior shall draw from the fire a burning sword. And that sword shall be Lightbringer, the Red Sword of Heroes, and he who clasps it shall be Azor Ahai come again, and the darkness shall flee before him.

The red comet -- or the bleeding star, if you will -- is the fulfilment of part of that prophecy, and it appears when Dany hatches her dragon eggs in Drogo's funeral pyre.

There are many theories and much speculation on this, and it is also related to the Prince that was promised, something that Rhaegar Targaryen was preoccupied with investigating.

It is also said

When the red star bleeds and the darkness gathers, Azor Ahai shall be born again amidst smoke and salt to wake dragons out of stone.

We can note that Daenerys has done all of these things. Her final sacrifice is also mirrored in the story of Nissa Nissa, the wife of Azor Ahai, who had to be sacrificed to make the legendary sword Lightbringer. (Yes, Melisandre tried to create a magic sword for Stannis, which she claimed was Lightbringer) Daenerys burned her husband Drogo, and Mirri Maaz Duur.

She woke the dragons from stone eggs. She was reborn in the fire (smoke). Lightbringer is her dragons.

Maester Aemon became convinced of this after meeting Xhondo:

Daenerys is the one, born amidst salt and smoke. The dragons prove it.

Xhondo's captain is Quhuru Mo, who met Daenerys and her dragons in Qarth (A Clash of Kings)

To my mind (and given how the world of the books work) I think it really was just a comet. In the real world there is a long history of comets being tied to prophecy and the supernatural. Which makes sense when put into context. The night sky has always been likened to clockwork. People may not have understood how and why the stars and planets moved the way they do, but they knew enough to predict how they would shift through the heavens. Then boom comes this alarmingly strange object in the sky that disturbingly looks like a falling star and has no explanation at all. It wasn't until Edmund Halley that we could predict the periodical movement of comets.

So we have this comet that suddenly appears in the skies of the world of Ice and Fire, and it's red. Predictably people attempt to find meaning into it. It becomes a convenient literary vehicle to showcase the characters' inner thoughts as they superimpose their fears and hopes on the comet. Dany believes that comet is there to guide her back home. Melisandre (a priest of a fiery god) and Nan (a teller of old tales) look at the comet and see dragons. Joffrey's supporters see Lannister crimson and prophecize victory, while (amusingly) Tully supporters see Tully mud red. More somber characters like Bryndan Tully and Aeron Greyjoy see war and bloodshed. Interestingly enough, the only people who see nothing special about the red comet are the Maesters (i.e. the scientists). To them the red comet is a curious astronomical phenomena but nothing more.

9
What happens to the "Red Comet"?

16
What were the memorable scenes in "A Storm of Swords" that motivated Benioff to make the adaptation?
9
What happens to the "Red Comet"?
6
Does the Faith Militant use laws retroactively?
4
Can reborn Azor Ahai and the Prince that was promised be different persons?
13
What is the range of a Warg? (Distance of Warging)
5
What is the explanation for Melisandre (Red Woman) seeing her reflection as old and frail?
4
Purpose behind this scene in Game Of Thrones?
27
Which realm in Westeros had the best archers?
4
What happens to the animals in winter?