Crashed on a planet of layers, darker and more dangerous the farther down

I need help finding a book. I've had head trauma and I can't remember, all I know is a few details about this book.

I'm 26 now and my father gave me this book when I was a teen... it was what turned me on to fantasy books. But I think the book is a lot older than that...

It was about these people that I believe crashed on this planet, a planet of layers and the further down they went, the darker and the more dangerous it got. I can't remember if or how they got off the planet... I think there was more than one person but I can't be certain.

Thank you so much if you are able to help.

This also reminds me of Alan Dean Foster's Midworld. The world he describes is covered in giant rain forest, with three distinct "layers". A small colony of humans (descendents of survivors from a spaceship crash) live in the middle layer; above them is "upper hell" and below them is "lower hell", where monsters live.

The Asgard Trilogy by Brian Stableford.

It consists three books with various titles: Asgard's Secret (1982), Asgard's Conquerors (1990), and Asgard's Center (1990); or it may be Journey to the Center, Invaders from the Centre, The Centre Can Not Hold.

I was excited last year to learn this was a trilogy, as I very much enjoyed the first book when DAW published it in 1982 as Journey to the Center: 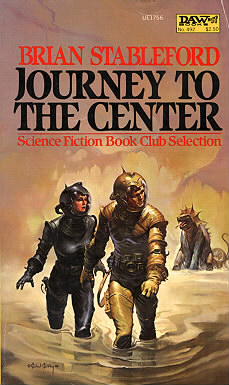 Here is the Amazon description of first book:

They call it Asgard, the Home of the Gods. Beneath its artificial shell are at least three vast cave-systems, each one the size of an Earth-like world; and beneath those, possibly many more. No one knows how many layers there might be, and no one knows what secrets might be buried down at the "center"--if there is a center.

At some time in the distant past, Asgard had suffered a terrible catastrophe. Now its outer layers are cold, its builders presumed dead. Explorers and exploiters from a hundred different worlds and races are scavenging among the ruins--but deep down, there might still be light, warmth, life...and perils unknown.

Mike Rousseau was one of the first humans to come to Asgard, decades earlier. Now he's challenged by both friends and foes--and it's hard to tell them apart on this icebound planet. He might also be the one man who can solve the biggest puzzle in the galaxy...if only he can stay alive! The first novel in a thrilling trilogy of science fiction adventure and discovery

The Well World series Well World series by Jack L. Chalker features a layered planet, though there are more wormhole-travels than actual concentric layers. In Midnight at the well of souls there is a space ship crash and the people are transformed into other creatures.

World of Tiers by Philip José Farmer have a layered planet. There's some spookieness involved but wormhole instead of spaceship.

Marrow by Robert Reed, published in 2000, has the conenctric layers by having a planet inside a giant starship. (A twist on the ship-inside-the-planet trope), it has the spookiness with insect-like creatures, possibly a prison with monsters inside the planet inside the ship and there is a space-ship crash in that the explorers descending from the outermost levels are stranded inside due to an ionic blast.

Robert Reed visited similar settings in "Aeons child", a story contained within the collection Dragons of springplace and also in "Remoras".

7
Book about girl that lives in an ice realm
11
Nomad/not nomad groups of people who try to use an ancient ship to return to their homeland
7
Book series where a man works to acquire skills on one planet to allow travel to another
10
Trying to recall the name of a young adult dystopian fantasy novel from late 90s / early 00s
2
Book - Young girl trapped on alien planet, makes friends with a higher-up alien
5
Book about aggressive aliens invasion
10
80s book similar to Narnia but with a more Celt feel, allusions to Finn MacCool and eating "the salmon of wisdom"
6
Book about a man who crashes on a planet and saves the princess with a magical weapon