Is Annika Hansen/Seven of Nine German?

Roddenberrys Star Trek always had the message that all human differences of the past are history. Now after Chekov, Sulu, Worf, Chakotay and Bashir (ain't he intended to be somehow Arabian?) is with Annika Hansen Germany joining the club?

"Annika" and "Hansen" are really very common German names. Furthermore she exhibits some stereotypical German attributes: Blond, tall, no sense of humor, a neck for science and technology, a military posture and tone of voice (at times she even bosses Janeway around), big fan of punctuality and relevance...

On the other hand neither her mother nor her aunt have German names. Her fathers name (Magnus) is rarely used nowadays in Germany but I wouldn't say it's an unusual name.

Does anybody know if she was intended to be "germanish"? Are there even in-universe references to proof or refute this? 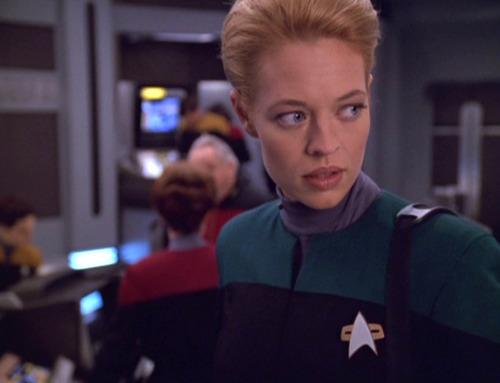 Furthermore she exhibits some stereotypical German attributes: Blond, tall, no sense of humor, a neck for science and technology, a military posture and tone of voice (at times she even bosses Janeway around), big fan of punctuality and relevance...

Both my German friends have a great sense of humour, and the ability to thoroughly kick your ass for that :-) The rest is spot-on.

However, other than the blonde and tall bit, those are basic Borg attributes. Germany disappeared long before the Voyager universe (along with all the other socio-political divisions) and as stated she was born many light years from Earth. Also gone from the Trek universe is any consideration that things like gender, colour, heritage and hairline matter in the slightest. You get where you are because of your abilities. Period. The diverse casting is intended to show the audience that fact. The catsuit is intended to keep the audience watching long enough for the point to sink in.

The Arabian connection with Dr. Bashir is via the actor (Alexander Siddig a.k.a Siddig El Fadil). Being a genetically engineered genius would not fall in line with any Arabic stereoytpes. As for Sulu (not a Japanese, but an American of Japanese descent), Chekov (born in Russia) etc. they are (from the pov of the original "western" audience) minorities. A white caucasian female would not be regarded as a part of a minority (in the US, that is), so I don't think name and appearance of Annika Hansen do have to same relevance.

Opinions aside, in-universe the character was not born on earth ("Tendara colony") so the question of (German) nationality does not arise.

This is more an aside that a proper answer to your question, but it is probably worth pointing out that Hansen is not a particular rare name in the USA. According to this site there were 117,000 Hansens in 1990. That made it the 222nd most popular surname.

In addition there were 107,000 Hansons (244th), and another 62,000 Hanssens and Hanssons. If you merge all these variants, it would be around the 60th most popular surname.

Anika is less common name. Its popularity is currently hovering around the high 500s.

I've quoted US figures since the makeup of Starfleet crews seems to be predominantly American. :)