Looking for a kid's book, might be really obscure

A long time ago, I read a book involving a small group of kids aboard a spaceship, and they encounter a sentient being in their ship's computer. The being turns out to (somehow) be a small boy from the ancient Egyptian period. The main chatacter's name is Kate Olafson (or Olafsson), and she is the caretaker the younger children. There might also be a cat. Based on what I remember of the cover art, the book is likely from the 70's or early 80's. Google, Amazon and WorldCat searches have all yielded nothing.

Could this be Ashar of Qarius? 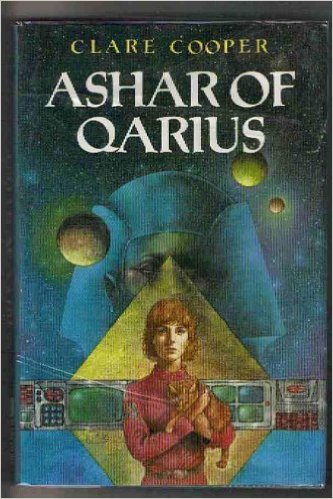 Along comes Ashar of Qarius, the thinking, feeling, and talking computer that presents further problems--whether it's friend or foe, and its connection to the planet's pyramids and ancient Egypt.

So the computer appears to be Egyptian.

Most relevant, the main character's name is Kate Olafson:

The story begins at the newly founded human colony on Plioctis. Kate Olafson and five-year-old William Pitt leave the dome to chase after Kate’s cat, Timmy, but when they return to the dome, they find it abandoned. They soon find out that the rest of the colony has been kidnapped by insectoid aliens. Then a strange being contacts Kate and William via their computer, a being who gives its name as Ashar and will say only that it is coming.

And as we can see from the cover, there is indeed a cat.

15
I'm looking for a sci fi book with a tribal woman, hermaphrodites, and implanting minds into new bodies
6
Looking for an obscure movie about time travel
5
Looking for a YA book about teenagers in space
10
Looking for the name of an 80s-era sci fi book
13
Looking for really trippy animated movie
7
Pre-90s SF book, four characters (including Elney, Fram and Lady Cleetha) crash-land on an alien planet and learn to survive
8
Old school horror/sci-fi illustrated anthology