Can She-Hulk's hair be cut?

Marvel Comics writer Fred Van Lente just asked via Twitter if She-Hulk has ever had short hair. This got me to wondering if the indestructible She-Hulk's hair can even be cut. Can her hair be cut? And if it can be cut, has an artist ever depicted her as having short hair in the main Marvel Universe (or any other parallel universe)?

As far as I know, neither the Hulk nor She-Hulk are indestructible. They're simply very very tough. She-Hulk #57 shows that she received a blood transfusion directly from the Hulk. This suggests that a tough enough needle can pierce the Hulk's skin. 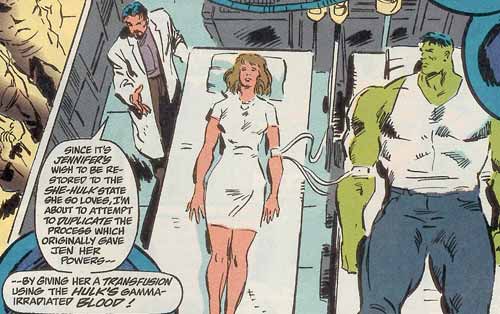 Similarly, one might imagine that their hair is tough but not indestructible. And as to the original question, I was able to find images of alternate Shulkies with short hair.

According to pictures on the Marvel Wiki, the She-Hulk from Earth-12 has short hair. 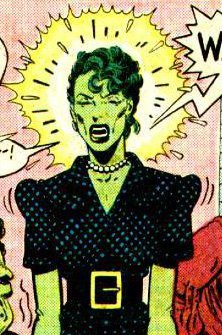 And to address one of the comments, her hairdo as Jennifer Walters appears to be independent of her hairdo as She-Hulk. So cutting her hair in her non-Hulk form wouldn't shorten her She-Hulk hair.

Why this is a more difficult problem than you think

The problem with the premise of the Hulk and hair starts with the question of how he becomes the Hulk in the first place. Our hair is actually not very tough or very durable, relatively speaking. It is made of a delicate substance similar to our fingernails, hair and skin called keratin. Keretin is little more than a decorative element on the human body and is vulnerable to the environment. Hair is brittle, fragile and easily destroyed. Not so for the enhanced bodies of the Hulk or She-Hulk. For purposes of this article it is assumed I am talking about the Hulk but most of what I will outline for him, will apply to her as well.

Since it is not explained (scientifically speaking) the nature of the Hulk's incredible resistance to damage, we are forced to suppose he has several potential avenues to explain his durability. These are my theories, not the Marvel Universe's (which makes no true explanation of his powers despite what you see in the Marvel Handbook.)

This density however, does not seem to extend to his non-altered form, so we have to assume the trigger mechanism and energy source is the part that remains unexplained. (Using the rules of the Marvel Universe, he would have to be like many of their mutants, tapping an alternative dimensional energy source to power his transformation into the Hulk, but it has never been discussed as such. This would be similar to Havoc, Cyclops, Sunfire, or Banshee, whose bodies could not possibly contain the fantastic energies they project as blasts of force, radiation, radiant energy or sonic energy.)

The Hulk's molecular and cellular structures must still resemble skin and hair but would be more like chitin (the material that makes up the protective exoskeletons of insects). While that would make the hulk far more durable than a normal human, it would also make him less flexible, since on humans, thick keratin can be found in fingernails and should be noticeable if the Hulk's skin appeared to suddenly resemble fingernail materials. Whatever he is, he is far more flexible than chitin or keratin is. So he must gain molecular density without sacrificing flexibility or a sense of tactile awareness.

b) A supplement to the superdense molecular structure option could be that the Hulk's body behaves more like a form of energized memory material. Since his powers always radiate gamma radiation, it could be possible his physical atoms are expanded by that radiation pulse. Like a memory plastic, he would expand in size and resistance to injury would increase as the structures comprising his cells would take on a more rigid and damage resistant form. This would explain the Hulk's nearly limitless power, since he would be a localized version of Cyclops' or Havoc's power of extra-dimensional energy, bound within the Hulk's body. This would also mean he releases that energy unconsciously, and at its most powerfully in his enraged state.

It does not explain where his extra mass comes from, but theoretically, if he is creating radiation from an unknown source, he could also be converting that same radiation into mass, since matter is merely localized energy. This would explain his muscularity, and similarity in appearance to his or her baseline form, since the expansion would only add to what was already there. This expansion and toughening would also explain why their haircuts would remain similar and how their hair survives attacks like flamethrowers or explosions. Its molecular toughness would be significantly increased.

c) The last component would be their regenerative process. This process would be related to the massive cellular density, the energized molecular plastic nature of his bones and musculature and linked to his energy source, and matter-creation properties, he would have an incredibly fast rate of regeneration, as his body's plastic nature would seek to restore the original template as quickly as possible. If his energy rate were high enough, it would appear to most onlookers that he did not actually take damage. Only attacks that could dampen his internal energy would have any long term chance of harming him.

This would also explain why in his lesser forms, such as Mr. Fixit, the Hulk was seen to be able to bleed since that form did not seem to have the high levels of energy available to the green or enraged Hulk thus reducing the energy to mass conversion needed to maintain his Hulk state.

The original energy required to perform this transformation is still unknown, but it is unlikely that the gamma radiation explosion Banner was exposed to did little more than activate a latent process or potential already within his DNA and able to be transferred to the She-Hulk through a blood transfusion, since, she as a relative, must have also possessed a similar potential for energy to mass conversion, superdense molecularization of her bodily tissues and bodily functions. The transformations into the Hulk or She-Hulk must still make their bodies only more effective and efficient versions of our own bodies, since they still have to eat, breathe and it is assumed, excrete.

She-hulk does not seem to have the enraged state but her cellular structure seems more stable and does not seem to require a downgrade to recharge. She has been known to remain in her Hulk state, even when unconscious.

In fights, neither Hulk is ever seen without hair even during intense battles using flamethrowers, explosives or even with powerful enemies such as the Harpy, Iron Man or even cosmic beings such as the Silver Surfer or Warlock. This means their hair has the same superhuman resistance due to its molecular structure, but is far more durable than our same keratin based hair would be in the face of similar threats.

As to haircuts, I imagine, the baseline body is the template, so any haircuts or hair styles would transfer to the superhuman form. Likely, any damage sustained unless a connection to their power source prevented it's regeneration would be immediate and instantaneous.

Disclaimer: As this document is written with my own opinions and is not affiliated with Marvel Comics, the ideas therein are mine and mine alone. I am certain Marvel will not put this much energy into deciding why the Hulk never needs a haircut or for that matter whether his hair is ever effected by anything. The same way those purple pants are never atomized when attacked by anything.

Her hair isn't indestructible, it's simply a lot harder than normal hair. The implication (regarding haircuts) is that she just goes through an awful lot of pairs of scissors.

23
How many characters have appeared in both Marvel and DC comics?
8
Can the Hulk's healing overcome supernatural afflictions?
7
Does Howard the Duck ever cross into Earth 616?
27
Has Thanos ever been defeated?
6
What is the status of Jessica Jones' daughter in comics?
30
Has any Marvel or DC comic ever shown graphic nudity?
14
Is Captain Marvel as strong in the comics as Kevin Feige suggests she will be in the MCU?
14
How does the *in-universe* Marvel Comics handle sensitive information like secret identities?
4
Can Captain Marvel break the fourth wall?