How does Superman shave?

I've seen several times when Superman is sporting a beard. How does he shave his indestructable hair?

I remember once in Superman the Animated Series that he used his heat vision, but that doesn't make sense to me seeing as he can fly through a star and not get burned. 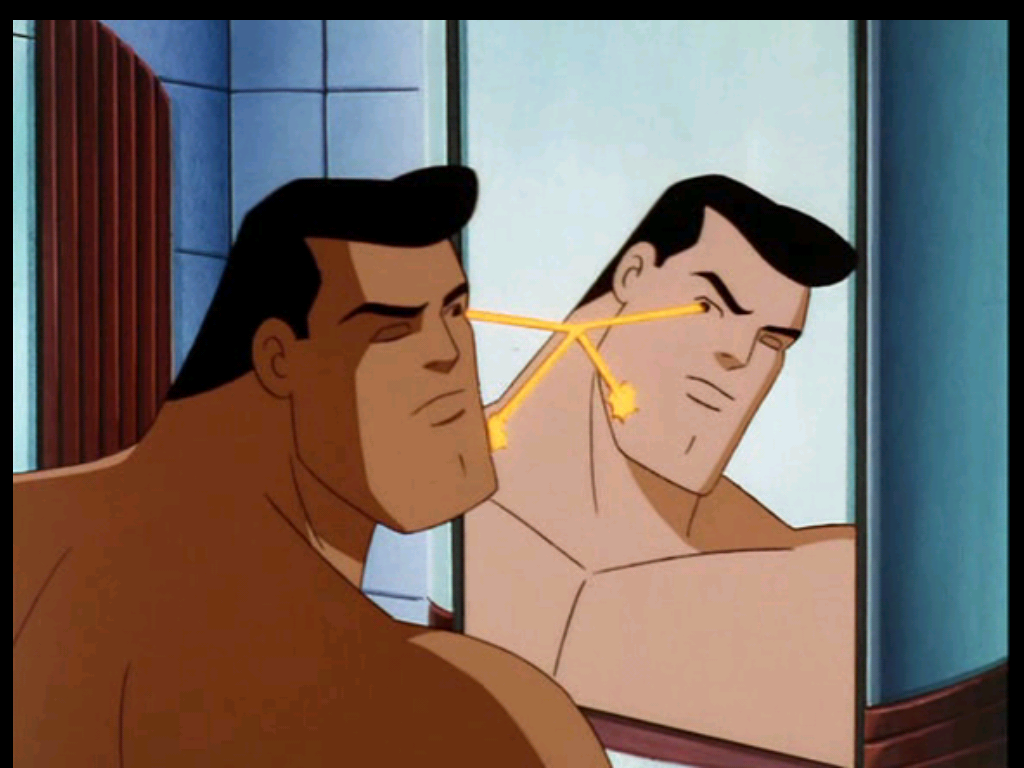 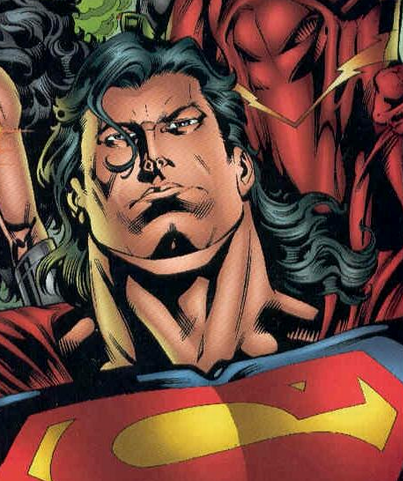 In the Golden Age of comics, Superman's hair didn't grow on Earth. There was even an entire issue dedicated to this fact at one point - Clark Kent was being tailed by a reporter/photographer for a rival company. She was one of the company's sleaze artists - always digging up gossip.

Her hired investigator kept taking photos of Clark, and she measured his hair in all of them. She found that his hair never grew by so much as a centimeter and jumped to the obvious conclusion: That it was a wig. She then got a photo of him in his apartment - completely bald. She tried to 'out' him on national TV by pulling off his wig, and got her comeuppance when it was revealed that it was his actual hair. He tweaked her nose by telling all their viewers that he'd explain everything...that night, on the Planet's news cast (I think that at the time, he was working for the Daily Planet's TV section - it was the golden age, and they had one).

On the news cast he revealed that he'd been wearing a cue ball wig to set Lex Luthor up for a police sting or something. The issue ended with the reporter swearing to figure out why his hair never grew.

I believe this went away by the time of the 80s or 90s, and has yet to come back. At one point in canon, however, Superman couldn't grow hair at all, and an entire story (which seemed likely to produce a new, lame supervillainess) was based around it.

In John Byrne's The Man of Steel, a retelling/retcon of Superman's origin, he has Superman shave via heat vision. He has a small piece of the Kryptonian spacecraft that brought him to Earth, which he bounces his heat vision off of to shave.

A very common bronze age interpretation of Superman's powers are that most of them stem from a "bio-energy matrix", a field of energy surrounding his body that is able to nullify or amplify the effect of other energy fields it comes in contact with (this field is powered by solar energy, stored within his body. That's why Batman blocks out the sun in Dark Knight Returns to drain Supes of his powers temporarily). For an example of this, he flies by neutralizing gravity.

This field is controlled by him subconsciously, it's like a reflex. This field can be extended to other objects as well, which is why he doesn't compromise the structural integrity of buildings when he catches them, because he extends his gravity nullification to surround the building.

He's also been shown in some cases to be able to remove this field temporarily at will, which would be how he shaves with regular tools.

Another common, but very unlikely, assertion is that he is unable to remove the field at will, and thus has to shave with either 1. a kryptonite coated razor or 2. a magically imbued razor, as those are the only external influences known to be able to either cancel out or ignore the bioenergy matrix.

That, or his bathroom light is red sun (which neutralizes the yellow sun energy stored in his body).

If you remember from Superman IV: The Quest for Peace, Lex Luthor was actually able to cut a piece of Superman's hair that was holding up a 1000 lb weight in a museum display. This suggests that his hair has a superhuman tensile strength, but is still susceptible to being sheared by a sharp object with a high enough pressure per square inch (i.e. a good pair of bolt cutters).

Superman seems to shave (mostly) by using his own heat vision, reflected back at himself. 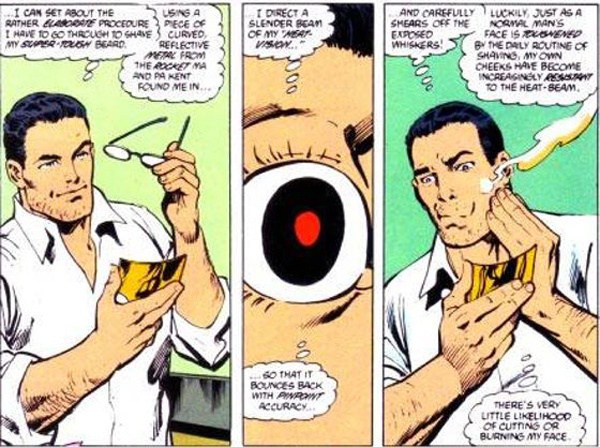 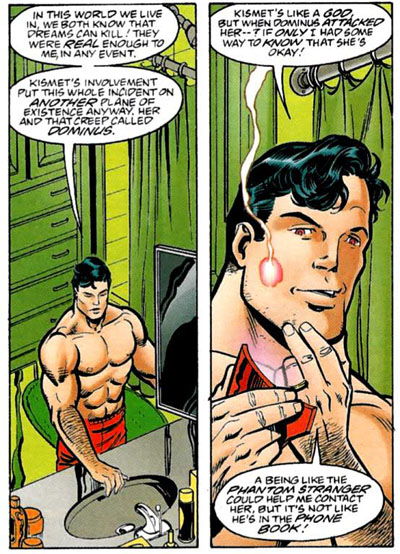 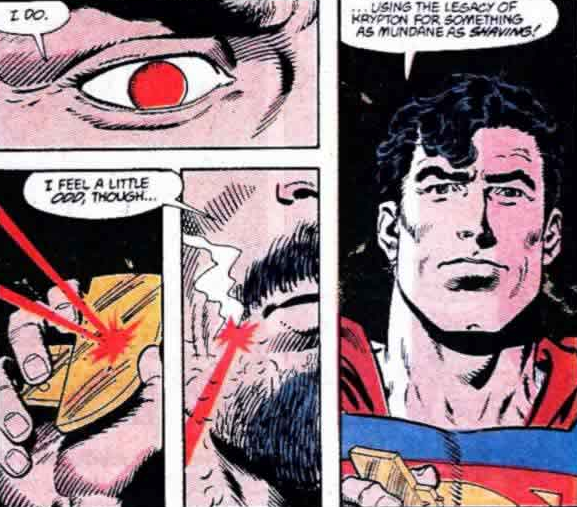 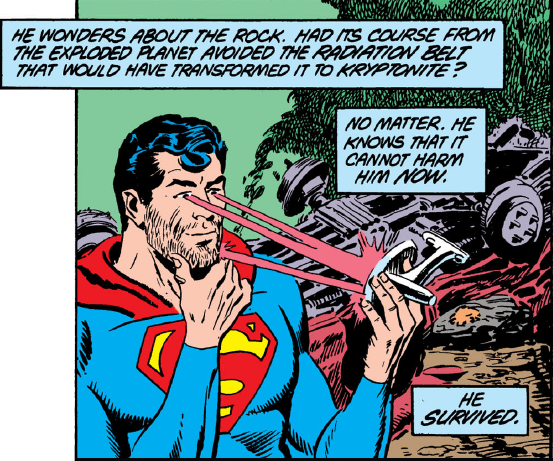 I remember reading a comic where he gets some sort of weird orange pollen on his head to escape a gorilla (?) that reacts to black like a bull reacts to red. Then he is forced to get a haircut. As he waits, worried that the blade will break, it actually cuts his hair. He even thinks that hair cuts are so relaxing. Something I remember even when I get a hair cut these days... I am sick...

As an analogy, of a similar style super character, similar problems, we have Will Smith, playing the Superman like character Hancock who handled this by using his fingernails to scrape his face and shave.

Perhaps a solution for Superman?

I remember it being explained in the letters page in the back of one of the DC comics of the early-mid '60s that his beard only grew, and could only be cut, under a red sun. It was also explained that he could visit Kandor and grow and/or shave a beard.

I remember going through my dad's old silver age comics as a kid, and in one, there was a point where superman as superboy, was rendered bald by red kryptonite and wore a wig for the duration of the comic, eventually waiting two weeks for the kryptonite effect to wear off and then flying to a planet where they had a hair tonic that worked on his invulnerable body enough to speed the recovery process. (he didnt go to the planet the day he lost his hair because he knew the kryptonite had to wear off first.)

in another he had to get his hair cut and so went to a planet with a red sun, bringing green lanter with him to get him back without worry of his temporary power loss

While Superman is invulnerable, why could his body not produce substances that themselves are not indestructible? For example, if he sheds tears, would not such tears be basically saline solution and therefore they could be boiled and would evaporate? If he breathes, which I read that he does, is the CO2 in his breath "special" CO2 or would it not be, for example, split by electrolysis into oxygen and carbon.

I would suggest that despite the canon, there is no reason to believe his hair might cut like the hair of normal humans.

The common, shown method of Superman cutting his hair with his heat vision has been answered a lot... but there is another few methods.

2
How could a normal razor/scissor cut Superman's hair?
0
How does Superman get a clean shave?
82
Does Data need to cut his hair?
36
Has Superman ever used his heat vision to cook food?
20
How did Harry get his hair cut at Hogwarts?
18
Why couldn't Henry Cavill simply shave his mustache for his Superman role and use a fake mustache for his other role?
5
Is Superman Immune to His Own Special Abilities?
12
Wait, does Superman's heat vision generate "superheat"?
7
Is the Black Canary immune to sonic screams?

12
How exactly does the world-hell transition work in Constantine?
24
How different is Superman's physiology from a normal human?
18
In story, how did Clark destroy the truck in Man of Steel without being caught?
16
How did the Kents raise a super-baby?
5
How does Superman control the distance his heat vision beam travels?
5
What is the evolutionary reason behind Kryptonians having x-ray vision and the ability to shoot lasers from eyes?
3
How can The Flash carry multiple people at once?
18
Has either Batman's or Superman's identity been accidentally revealed by someone in the comics?