It just occurred to me that hardly anyone in any of the series is married! What's up with that? O'Brien is married, Dr Crusher and Cpt Sisko are widowed, Tom Paris and B'Elanna Torres get married - those are the only examples I can think of. Other than the characters listed, and not counting marriages that take place after the time of the respective series (Crusher and Picard) or alternate reality stories (Troi and Worf), are any recurring characters in any of the series married?

Adding to the other answers' lists, and concentrating on major crew members.

Voyager:
- Janeway was engaged prior to her mission to the Badlands.
- Tuvok is married with children and a granddaughter.
- Ensign Wildman is married (and pregnant with Niomi) at the beginning of the show.

Enterprise:
- Phlox is married (3 wives).
- T'Pol was married, with that later annulled

TOS:
- Spock was briefly married, with marriage annulled (what is it with the Vulcans?)
- Kirk was engaged, but chose Starfleet career over marriage.

DS9:
- Some of Dax's past hosts were married (both as male and female.)
- Quark was briefly married to Grilka, who then divorced him.
- General Martok's wife is an important figure in his house, and had to give her blessing for Jadzia to marry Worf.
- Gul Dukat had a wife (s?) and children.

And there are many "alternate timeline" episodes with possible/alternate futures to fill a book with marriages, divorces, and so on:
- Voyager's Doctor is seen with his wife in "Endgame".
- Chakotay is told to have married Seven of Nine, also in "Endgame".
- Tom Paris and Kes were married and had a daughter (who then married Harry Kim.)
- Beverly Crusher married Jean-Luc Picard (and then divorced him [but kept the last name]).
- The whole Defiant crew paired up and married each other when they got stranded in the past on a distant planet.
- Jake Sisco married and divorced when his father got phased out of reality.
- etc.

How about Spock's parents, from the original series? Ambassador Sarek and Amanda Grayson. 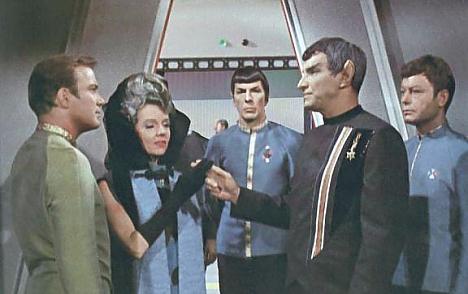 Apparently life on a space station (DS9) is where people go to settle down.

How recurring do you want? Ishka (Rom and Quark's mother) partners up with Zek. You can see a few others at Memory Alpha

Star Trek is patterned after old time explorers (when it isn't being a "wagon to the stars" :)

Many of those people were NOT married, due to the nature of ocean travel at the time (months/years between being onshore)

The DS9 marriages were already mentioned by Jack B Nimble.

There are also a few near marriages:

Marriage did come up a few times in the various shows.

Notice the marriages mentioned above occur in TOS before Roddenberry was adamant about his philosophy, or after his death (in TNG, DS9). Don't believe me, watch Trek Nation or Chaos On The Bridge.

Short answer, Roddenberry was against religion (and marriage) in the 24/25th century.

I don't want to list everything that everyone else covered. I will mention Chapel was engaged too, since nobody else has.

Now, In Balance of Terror, Kirk was about to officiate the wedding of Angela Martine and Robert Tomlinson. Tomlinson died in the episode and it never happened but some of the dialogue over the course of TOS suggests that it wasn't uncommon. Bones said that there's no regs against romance. Martine and Tomlinson talk about one of them transferring departments so they weren't in the same chain of command.

In one of the novels, Kirk and his girlfriend shared quarters but weren't married, she later died but that's neither here nor there.

Also in ST as a whole, people don't always change their names, unless it's specifically stated, you don't know who's married (i.e. Spock, his 'wife' and the shock of the bridge crew).

The Star Trek series are adventures. They primarily focus on encounters with other cultures and phenomena. There are stories which are more character and relationship driven, and certain characters have relationship arcs (sometimes confined to individual episodes, sometimes spanning seasons), but they are more about defining/filling in the characters who participate in the adventures. The Galaxy class NCC-1701-D had families aboard, which at least implied married couples. Since this ship is about science and generally working and living in space (it has a school for the crewmembers' kids), it must be assumed that shipboard life must be (mostly) no more hazardous than Earthbound life, so families could/would choose to bring their families along and live aboard, but this is mostly implied.

As already stated (with examples) in other answers, many characters are either married, have been married, get married, are engaged, get engaged, or initiate a relationship within the span of the series in which they appear. Their relationships don't necessarily get a lot of screen time because it would draw focus away from the adventure aspect of the shows. Nevertheless, a lot of episodes do feature relationships between certain characters and their significant others.

To put it another way, Star Trek is space opera, not soap opera.

John Boychuk is right, the best explanations are Doylist. The show is about the adventures the characters have and they aren't bringing their husbands and wives along for that. You could have the husbands and wives sit at home and just talk things out with their spouses...but it's more economical to have the characters talk to other regular characters. Keiko was only in a handful of episodes over the whole run of DS9, the writers just didn't get around to using her much.

Miles and Keiko O'Brien? Had kids and all (with the wildest surrogate motherhood ever, a brilliant way to cover up an actual pregnancy)

4
What does Star Trek have against marriage and families?

19
Who was in command of the Enterprise during the mission in "Time's Arrow"?
9
When did Tom Paris and B'elanna Torres get married?
64
Has any Star Trek character appeared in all three division uniform colors?
5
Which main TNG character has spent the most episodes 'absent'?
28
Are there any Star Trek characters that are hybrids of non-human species?
46
Why are there no Jews in the Star Trek universe?
4
Why didn't Picard destroy the Borg sphere before it went back in time?
4
What other Star Trek series did the main TNG cast show up in?
20
Are there any Star Trek episode that feature only regular/recurring cast and no guest stars?