Why doesn't Voldemort use muggle technology to trivially destroy all of his obstacles? [duplicate]

I know Voldemort despises mudbloods and muggles but even he couldn't deny the brutality of muggle weapons. An intelligent and dark mind such as his must have been drawn to and must have appreciated the sheer lethal efficiency of muggle technology.

Burned a few tents Voldy? Aw, that's sweet. Take a look at Hiroshima. The Holocaust. The Sabra and Shatila Massacre.

All Voldemort would have to do is brew up some polyjuice potion that would disguise him as an MP, drink some Felix Felicis, aparate into Number Ten, use an invisible ropes charm on the Prime Minisiter, force him to drink a bit of Truth Serum to reveal nuclear codes, do the same in the other five nuclear powers and...done. The world is his.

None of Rowling's vague references of Voldy 'terrorising the muggle worrld' in the backstory, or indeed, the day Voldy brought the UK's entire economy to a grinding halt by destroying a single footbridge, would come anywhere remotely close to the destruction he could reek with muggle weapons.

Maybe nukes are a bit too fast for Voldemort's liking. What about some weaponised smallpox? Or napalm? Or white phosphorus?

It makes no sense at all, genuinely.

Edit All civlisations would have no choice but to submit to his will. Even wizarding civilisations would have no choice. Even if wizarding communities were left completely untouched by a nuclear bombardment, the surrounding land would be scarred and radioactive, the rain would be poisoned, there would be no plants, no infrastructure. I'm sure there are charms against such a poisonous environment, but the magical folk would constantly be creating charms against the outside world, to create food, to heal themselves, and would be near-powerless against a death eater attack.

The whole world, with all its magic and all its time-turners (provding he put this plan into action pre-1996) and all its secrets regarding immortality would be his.

There's also shorter-term reasons here as well. Voldemort is genuinely scared of Dumbledore, and Harry is a genuine threat. Launch a nuke, or even a surface missile at Hogwarts and the inhabitants would have no hope. He wouldn't have had the nostalgic thrill of destroying his old school in person, but like I say, there's pragmatism here, and that final battle did even turn out to be his undoing.

Magic is..well magic, meaning it very conviently automatically fills up all plot holes. But in the films and the books we see the teachers of Hogwarts taking weeks (maybe longer) to shore up Hogwart's defences with protective wards, and that was because they knew long, long in advance that Voldemort had returned to power.

I'm sure Lucius, Bellatrix or even the big V himself could pull off the acquisition of a surface to surface missile after the events of The Goblet of Fire. Heck, I don't see why Professor Quirrel couldn't pull it off before the first book even began. There's five military bases in Scotland. Quirrel could take a stroll down the road, and easily acquire a muggle soldier and a missile using his knowledge of the Dark Arts. Moderate to liberal application of the cruciatus curse to find out what all these confounded muggle switches do and instantly no more Hogwarts, no more Dumbledore. Harry would never manifest into a real threat. No way would any teachers have a second to prepare any charms.

True there could be passive protective wards, even personal wards around the teachers and students themselves, but I'd like to draw attention to these quotes:

But before he could draw himself up to pull height, the top of his head collided with the Durseley's open window. Harry felt as though his head had been split in two. Eyes streaming, he swayed, trying to focus on the street to spot the source of the noise, but he had barely staggered upright when two large purple hands reached through the open window and closed tightly around his throat.

The bread knife slipped off the board and landed, point down and quivering ominously, exactly where Sirius's right hand had been seconds before.

Ominously is the key word there. There's a real threat of Sirius being seriously hurt. I doubt that bread knife had a counter-ward charm applied to it. I seriously doubt the dursley's window sill is magical. 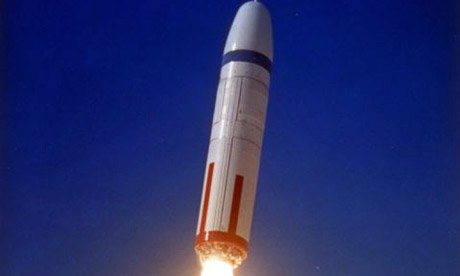 I can't give a definite answer, but here are some fair reasons:

For starters, I wonder how aware is Voldemort, or any other wizard, of the Muggle world. Just look at Ron's father - someone fascinated with everything Muggle, yet oblivious to, well, everything Muggle.

If Arthur doesn't have the faintest idea about rubber ducks or airplanes, he probably doesn't know about computers. Much less about missile silos. And, even less, about nuclear protocols. I can hardly believe Voldemort having any greater knowledge on those aspects than Arthur. Besides, he was a busy guy - making horcruxes, learning about dark magic, and being half-dead.

I don't think that Voldemort understands muggle technology. He probably doesn't even know about warships, bombers and other crafts - just like any wizard.

He doesn't need to kill muggles

He plans for pureblood wizard dominance. You don't need to kill the muggles for that. It would very well be more productive to just enslave them - make them kneel upon the wizard supremacy.

Ok, let's suppose that Voldemort does indeed have nuclear knowledge. Would he fire a missile? Mass-destruction weapons have the side-effect of killing unintended targets as well. This may include pureblood wizards.

Voldemort doesn't want to kill pureblood wizards - certainly, he wouldn't care, but killing purebloods only makes his quest for wizard dominance much harder.

He is confident he can kill Harry with his own magic

Voldemort is clearly arrogant enough to think he can best Harry in any magic duel, no need for help. Except for the Elder Wand, which he sought because of the twin-core weakness, of course.

First, muggle tech goes haywire around magic, so most of those methods would be a very unreliable choice.

But second and more importantly, we need to remember that Voldemort's stated objectives and his actual objectives don't really match up. If his primary goal was to wipe out muggles, he could do it much more effectively, with magic or with muggle tech. But that's not his major motive.

Voldemort's about power and control. Muggles are a great scapegoat, and he genuinely dislikes them, but his own personal goals are focused on immortality and domination. His anti-muggle rhetoric is mostly just a party line to appeal to the purebloods in his cabal. Killing all the muggles would mean he'd have to find a new scapegoat. Harassing the muggles gives him the appearance of being hard on them and provides his lackeys a sense that they're getting things accomplished without actually disrupting the status quo too much.

Voldemort doesn't want to wreck everything. He's not an anarchist, he's not Davros, and he's definitely not suicidal. He wants to rule the world, and that means not breaking it too hard in the process. Even if muggle tech were going to work on magical targets (which it almost certainly wouldn't), the kind of overkill you're describing isn't in line with his plans: he wants to dominate a civilisation, not a nuclear wasteland.

382
Why don't Muggle-born wizards use Muggle technology to fight Death Eaters?
-2
Why Don't the Death Eaters Kill Harry Physically
0
Could Voldemort have killed Harry with Muggle weapons?
50
Why doesn't the wizarding world use computers?
2
Why didn't Voldemort just Kill Harry the old Fashioned way? With a knife or something else?

382
Why don't Muggle-born wizards use Muggle technology to fight Death Eaters?
8
Outside Hogwarts, wouldn't it have been beneficial to use Muggle-technology as well as Magic?
11
Why Voldemort sent some of his best men to occupy the DADA job if he had cursed it?
39
Why didn't Voldemort use the Ministry to rise to power and instead chose to become a criminal?
3
Why couldn't Harry delay Voldemort attacking to destroy the Horcuruxes?
3
Why did Voldemort return to the house of his hated Muggle father?
0
Why did Dumbledore say that even his most protective spells weren't invincible against Voldemort at full power?
14
Would a Muggle show up on the Marauder's Map?