What is Wonder Woman's magic lasso woven from?

Incredibly strong, able to stretch and contract, and a magical lie detector created by the Gods of old... What is DC Comics Wonder Woman's lasso of truth made of?

Wonder Woman's Magic Lasso of Aphrodite or Lasso of Truth has two origins.

was forged by the god Hephaestus from the Golden Girdle of Gaea that was once worn by Antiope, sister of Hippolyta.

This information comes from Wikipedia 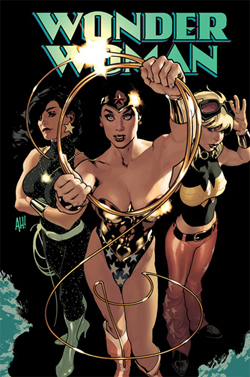 Pre-Crisis, according to the DC Wiki, is much the same (if much less specific):

lasso was formed from Aphrodite's girdle.

As you can see when George Pérez re-booted the Amazonian's origin he went for Gaea, goddess of the earth, rather than Aphrodite. As Pérez had a very different view point on Princess Diana of Themyscira in the 1980's when he worked on her book than William Marston did when he created her in the 1940's.