Why are there so many human Borg?

Very related to this question, we know why there are so few/almost no non-humanoid Borg out there. That's all well and good.

But in nearly every iteration of Borg that we've seen, every last member of the collective looks incredibly... human. Even the initial borg who teleports onto Enterprise-D looks like a human with all the color drained from their skin.

In short, why do so many Borg look like pale-skinned humans, and not pale-skinned version of the various species they've been assimilating for eons? There are a few that aren't, but since the Borg have only had a few years contact with humans, shouldn't the difference be far greater?

In-universe, it's just a perspective of rarity, I think, as the majority of characters we see on Trek are humans, and the Borg are usually fighting humans on screen. What we see depicted is not the "deep well" of aliens that the Borg has assimilated over a long period of time - but usually the newer recruits being assimilated as the Borg invade.

Out-universe, my guess is that it makes production easier to only apply Borg makeup to random extras and not double up with alien and Borg makeup.

It's not that non-human borg don't exist, as we see in the show and movies they can retain their native features:

When B'Elanna was assimilated, she retained her Klingon head ridges 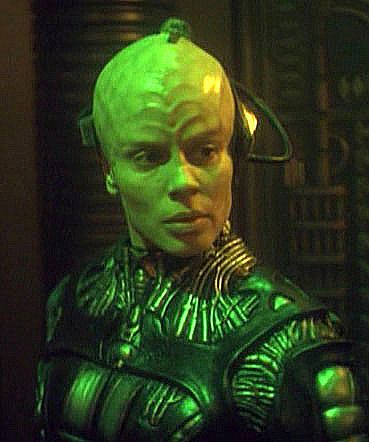 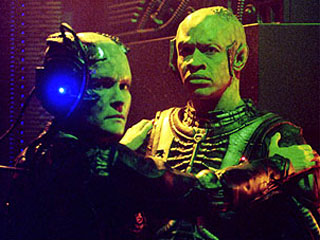 First Contact had at least three non-human drones. A Cardassian, a Bolian and a Klingon (with mustache). 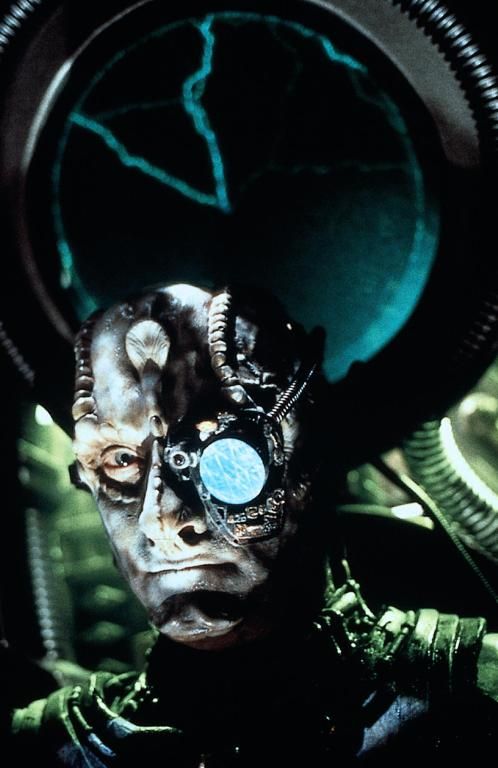 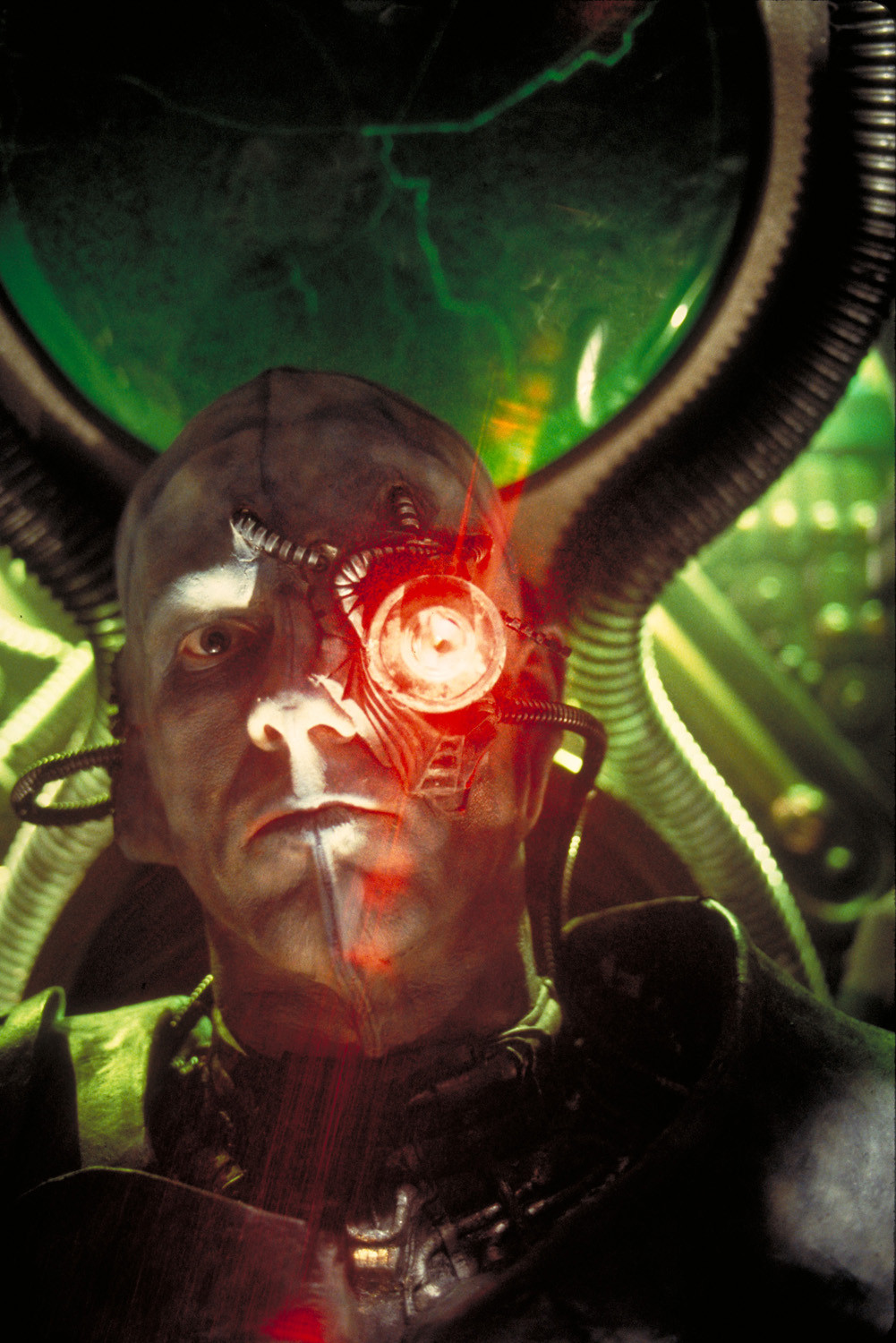 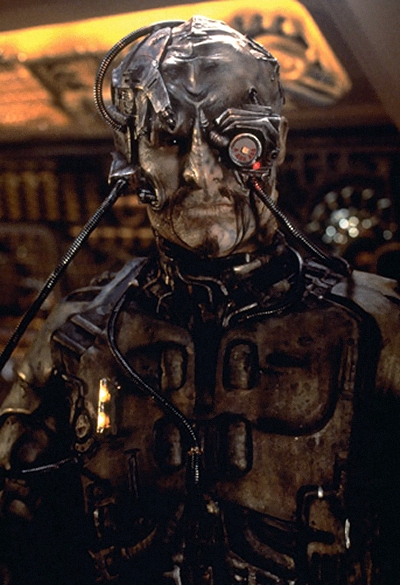 The Borg Queen in "Dark Frontier" is explicitly a member of Species 125, and not human. However, she looks like an ordinary human with Borg implants: 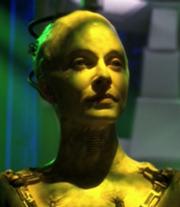 Presumably at least some of the other human-looking Borg are actually members of similar "extremely humanoid" species (or just species which differ from humans in ways that are obscured by becoming Borg).

Alien races in Star Trek tend to look more or less humanoid (many look completely human even, such as the race in VOY False Profits).

Out-of-universe this is clearly due to budgetary constraints as well as avoiding unnecessary plot complexity.

If the TNG episode The Chase is to believed, the progenitor race seeded much of the galaxy with their DNA. This could explain why so many races look humanoid, or rather they look like that progenitor race. Granted, the message did imply they only seeded part of the galaxy, but it's not explicit. 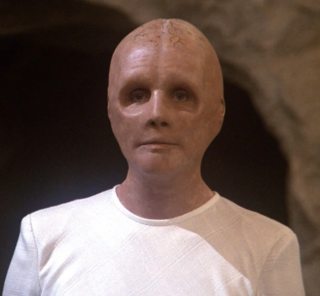 We have seen many Borg drones on various iterations of Trek and they are all humanoid. As others have mentioned already they are not all human, but I can't think of any example of a Borg drone that isn't humanoid (two arms, two legs, etc.). The implication is that Borg drones are almost all humanoid, at least those serving on Borg ships. Even if the Borg attack and assimilate non-humanoid races (we certainly know they tried to do so with Species 8472 in Voyager), they may choose not to incorporate those individuals from those races as drones. Perhaps they find other uses for them or maybe they just kill them. Assimilation is about more than just increasing the Borg drone population — they take whatever they find useful and discard the rest.

Also, Borg assimilation technology may not work as well with some non-humanoid races. We know they had trouble assimilating Species 8472, and conceivably Borg nanoprobes would have trouble with Tholians or Changelings. 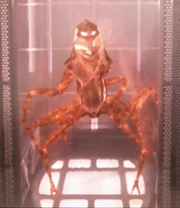 We also know that the Borg value uniformity, efficiency, and perfection. It's much more efficient to build a Borg cube that can accommodate a mostly-uniform body type and appendages rather than have to deal with a variety of different shapes and sizes of drones. Mass-producing hallways, control panels, recharging stations, and implants is a lot easier and more efficient if they can all be exactly the same (or can be modified to be the same). The Borg have no incentive to design things to be universal and given the abundance of humanoid life to assimilate in the galaxy they can afford to be picky about who they make into drones.

So conceivably the Borg started off from a humanoid race (likely given how common those types of species are in the galaxy from what we've seen throughout Star Trek) and continued that trend due to convenience. Still, it's also possible they originated in a non-humanoid species and found that humanoid species made the best drones.

It's not alpha canon but Star Trek Online apparently has a Gorn Borg drone — though the fact that this is an elite tactical unit merely reinforces the point that regular drones are intentionally humanoid. Plus Gorn are relatively humanoid anyway. 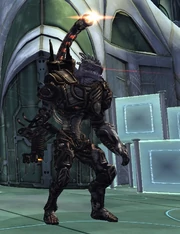 31
Why are there no non-humanoid Borg?
9
When did the Borg contact the Cardassians?

24
How many Borg are there in The Collective?
31
Why are there no non-humanoid Borg?
21
The Borg uses many numbers as species designation, who were Species 1?
19
Why is Worf always called by one name?
33
Are the Borg a species?
17
Where were the advanced species and civilizations of ST:TOS during the war against the Borg?
15
Why is there a Borg Queen?
27
Why are the Borg not entirely synthetic?