How could Legolas walk on snow?

In The Lord of the Rings: The Fellowship of the Ring when the Fellowship is climbing the mountains and are pretty much overcome by the snow; Legolas is quite able to walk on the snow, when the rest have to wade through the snow:

Slowly they moved off, and were soon toiling heavily. In places the snow was breast-high, and often Boromir seemed to be swimming or burrowing with his great arms rather than walking.

Legolas watched them for a while with a smile upon his lips, and then he turned to the others.

"The strongest must seek a way, say you? But I say: let a ploughman plough, but choose an otter for swimming, and for running light over grass and leaf or over snow-an Elf."

With that he sprang forth nimbly, and then Frodo noticed as if for the first time, though he had long known it, that the Elf had no boots, but wore only light shoes, as he always did, and his feet made little imprint in the snow.

"Farewell!" he said to Gandalf. "I go to find the Sun!" Then swift as a runner over firm sand he shot away, and quickly overtaking the toiling men, with a wave of his hand he passed them, and sped into the distance, and vanished round the rocky turn.

How is this so? Is there any canon explanation of this (or any similar) ability?

Legolas is a Sindarin Elf, but culturally he has more in common with the Silvan Elves of Mirkwood and (more distantly) Lorien. He is very light of foot and skillful in his movements, and - while he probably wouldn't have much experience with mountainous terrain - he is capable of moving with considerable ease where others would have difficulty.

Later on, in Lorien, we see the following:

'Celebrant is already a strong stream here, as you see,' said Haldir 'and it runs both swift and deep, and is very cold. We do not set foot in it so far north, unless we must. But in these days of watchfulness we do not make bridges. This is how we cross! Follow me!' He made his end of the rope fast about another tree, and then ran lightly along it, over the river and back again, as if he were on a road.
'I can walk this path,' said Legolas; 'but the others have not this skill. Must they swim?'

Haldir's crossing of the rope recalls the snow scene (the same words are even used: "running light"/"ran lightly"), and Legolas himself suggests that this is a skill. It's also interesting to note that on Caradhras Legolas says "running light over grass and leaf" which suggests that it's a skill picked up from his forest home.

In other words: "this is uneven, soft stuff; I know how to run lightly over another kind of uneven soft stuff, let's give it a try".

There is one group of Elves who do have considerable experience with snowy, icy terrain, and they're the Noldor who followed Fingolfin over the Grinding Ice at the start of the First Age of the Sun. If (as seems likely) Glorfindel was one of them, he would have been a greater asset to the company on Caradhras. Galadriel was also one in some versions of her story (in others she travelled separately to Middle-earth), but neither case is relevant to that of Legolas.

In-canon, the quote you've referenced is just about the best one to describe how the elves (with their extremely light bodies and swift movements) seem to almost float over packed snow. You should, however note that this ability only seems to apply when they're running, not when they're walking.

We can see from this pen-sketch by Tolkien that elves wear long shoes and have strongly elongated (but painfully thin) limbs. It follows that they would be well suited for moving over snow. The impact of a single step would be very low and the depth of tread would be similarly shallow, allowing faster movement; 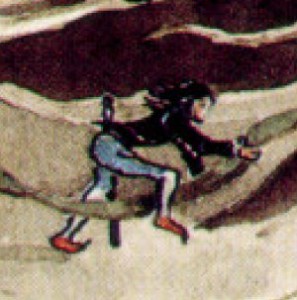 About the best example I could think of would be the vid below. Although the snow is nearly a foot deep in places, the cheetah's legs rarely go in more than a couple of inches when it's moving at speed.

Not the answer you're looking for? Browse other questions tagged the-lord-of-the-rings tolkiens-legendarium the-fellowship-of-the-ring or ask your own question.

2
Why are Elves so much lighter than other races

10
How did Bilbo Baggins find the One Ring exactly?
55
Why does Frodo cry "O Elbereth! Gilthoniel!" at Weathertop?
5
How much do hobbits weigh?
20
Why did the Fellowship scatter so chaotically at Parth Galen?
9
Was it a good idea for Galadriel to give Legolas an unfamiliar bow?
34
What was the shadow that passed over the fellowship on the path from Hollin to the mountain-pass?
11
What happened to Merry after Tom Bombadil saved them from the Barrow-wights?
9
Could an Elf kill Sauron in single combat?
4
Why did both Frodo and Aragorn keep Gollum a secret for seemingly no reason?