Why did early Marvel writers change Thor from his legendary red-haired appearance in Norse mythology?

I'm doing a project on Norse mythology. Many early descriptions of Thor suggest that he was "fierce-eyed, red-haired and red-bearded"

I was wondering why Marvel changed Thor's physical appearance so much in the comics and movies. If anyone can find out why, I will be very happy about that.

There is actually a great writeup about this titled Blond Thor - Stan Lee Wasn't Wrong.

It can be noted that Stan Lee and Jack Kirby apparently did consider the red haired, bearded design and decided against it.

In an issue of The Jack Kirby Collector, Stan Lee says

“Before starting the series, we stuffed ourselves to the gills with Norse mythology, as well as almost every other type of mythology – we love it all! But you’ve got to remember that these are legendary tales – myths – and no two versions are ever exactly the same. We changed a lot of things – for example, in most of the myths Thor has red hair, Odin has one eye, etc. But we preferred doing our own version.”

The article delves into why Thor is said to have had red hair and a beard. Their findings were surprising.

I don't want to copy/paste too much, but the TL;DR of it is that when they started looking into it, the very early texts said that he had either red or blonde hair depending on your interpretation of the material. Those early texts also waffled on whether or not he had a beard at all. It wasn't until much later (we're talking 300-400 years) that he was "definitively" red-headed. So, making him blonde and without a beard actually harkens back to what may have been his earliest depiction.

Much of the blonde design may actually stem from Steve Ditko's (a friend and co-worker of Stan Lee) earlier work on a comic called "The Hammer of Thor" for Charlton Comics. Here it was a young, blonde and beardless viking who happened to find Thor's hammer. 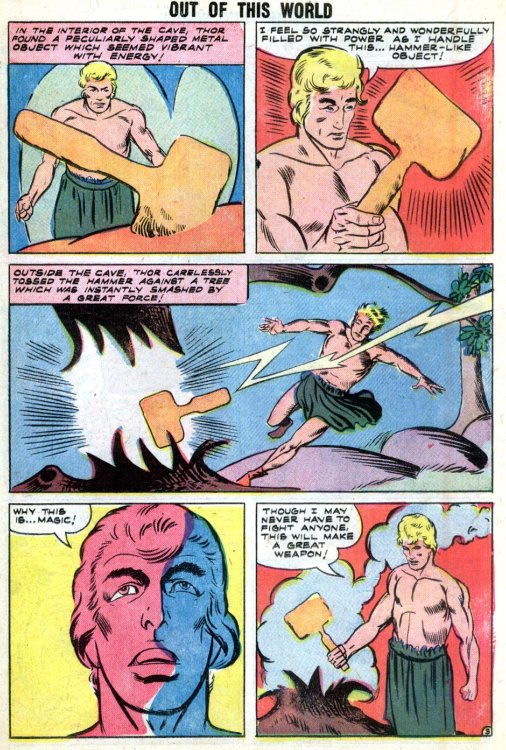 Donald Blake's discovery of the cane which magically transforms into Thor's hammer in Marvel's Journey Into Mystery is incredibly similar. 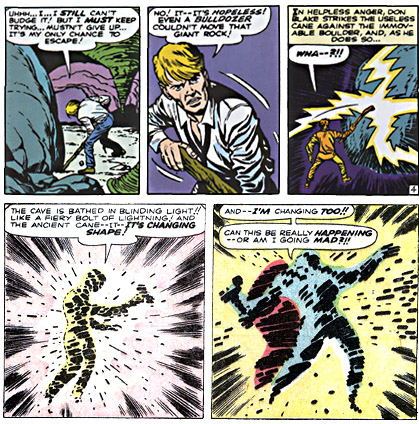 There are a considerable number of paintings from the 1700s and 1800s that depict Thor, for example

"Thor's Battle Against the Jötnar" by Mårten Eskil Winge. 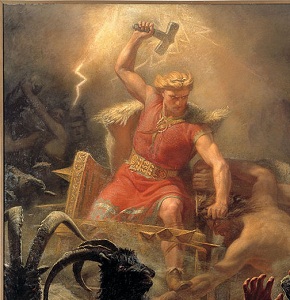 and Thor and Jormungand by Johann Heinrich Füssli 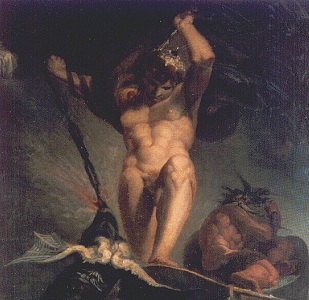 As you can see, these famous images bears a striking resemblance to the cartoon and movie depictions of Thor created in 1964 and 2011. 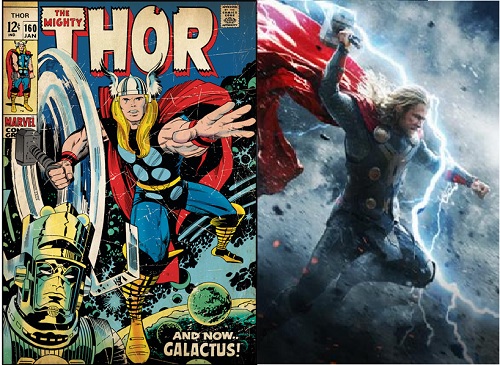 As such, I would dispute the premise of the question. Stan Lee and Marvel may have decided not to make him a bearded redhead, but they certainly weren't the first to do so, nor were they going against the popular impression of what he would look like.

It's perhaps worth noting that the earliest Thor comic (which predates the Marvel version by nearly 30 years) also has a blond, beardless Thor. 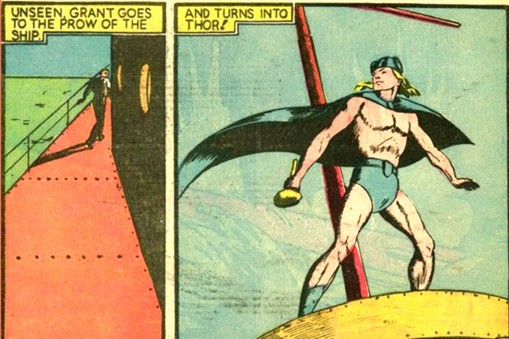 Actually, Thor is supposed to be blonde. He was only described as red-haired by christians, but the vikings described him as having gold hair or light hair. Hence why some viking would try to make their hair look blonde to be more like the thunder god.

I know this is not what many want to hear, but truth sometimes is a bitter pill.

In 2012, the journal 'Psychological Studies' published a study that created quite a stir on this topic, and was widely reported as "bad news for redheads." Researcher Nicolas Guéguen examined how hair color alone could influence a person's chances of scoring at a nightclub. By using the same set of men and women, and changing only the apparent color of their hair, this experiment was able to separate the influence of other features and characteristics. Men were rejected the most often when wearing a ginger wig. The news looks pretty bad for ginger men.

This would be a far more accurate depiction of the original Thor: http://www.webburgr.com/wp-content/uploads/2014/03/ginger-male-2-3.jpg

Not the answer you're looking for? Browse other questions tagged marvel thor-marvel loki or ask your own question.

7
In "Fear Itself," did Matt Fraction base his additions to the Thor-canon on actual Norse mythology?
22
Did Chris Claremont have to change his long-term plans for the X-Men in the early '90s?
19
Why doesn't movie Thor consistently wear his battle helmet like comic book Thor did?
6
Why did Berry change Storm's accent from the first X-Men movie?
10
Why did Miles Morales get non-spider-like powers (bio-electrokinesis and invisibility) that are vastly different from the other spider people?
14
Why did Marvel characters from the 80s often have blue hair?