Why doesn't Starfleet have personal shields?

In the Next Generation episode A Fistful of Datas Worf is able to build a personal shield out of a telegraph machine and a standard issue communicator. Although Worf says it is highly unstable and won't last more than fifteen seconds, this is likely due more to the limited tools, technology and time that Worf had available to build it with than to the concept itself.

Once off the holodeck, why doesn't Worf or Starfleet research and developed a proper personal shield for personnel to use? It would make sense to have as standard equipment, stored right next to the hand phasers for away teams or supplied to troops deployed in a war. Even if it could only absorb a single shot before failing, that's still better than nothing.

They do have them, in large numbers. They just don't generally use them because...erm...mumbles incoherently

In DS9 : Homefront, there's mention that there are sufficient on Earth to equip an entire army;

"LEYTON: Mister President, we can use the Lakota's transporters and communications system to mobilise every Starfleet officer on Earth in less than twelve hours. We've been preparing for something like this for a long time. We have stockpiles of phaser rifles, personal forcefields, photon grenades, enough to equip an entire army. I can start getting men on the streets immediately.

JARESH-INYO: What you're asking me to do is declare martial law.

I think we can reasonably assume from Jaresh Inyo's instantly negative response that using personal shields is anathema to the Federation's principles of peace and viewed as the first step on the road to a police state.

On top of that, there's no real evidence that they'd be especially useful. There's a passing reference in DS9: "Business as Usual" that the sort of hand-held particle weapons that can be openly purchased would easily overmatch the sort of protection offered by a small personal shield

QUARK : The Breen CRM-one-fourteen works equally well against moving vessels or surface emplacements. It's guaranteed to cut through reactive armor in the six-to-fifteen centimeter range, and shields up to four-point-six gigajoules.

Admittedly this weapon is a very serious (and expensive) piece of kit, but I think we can presume that other races' standard particle weapons would be able to produce at least a reasonable fraction of this figure. Since the energy output of a communicator-sized battery would be tiny in comparison, the shield would be next to useless. 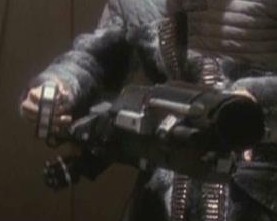 Having said all that, we do see some applications of personal shield technology in Star Trek : The Animated Series, with the use of shield-based portable life-support systems. These are only used a couple of times but the principle seems solid; 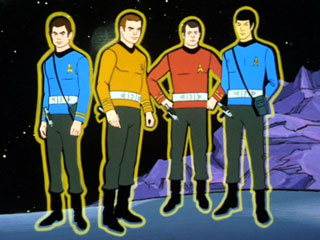