How could Thor's hammer Mjölnir be forged in the heart of a dying star?

Mjölnir (literally, "that which smashes") is the hammer wielded by Thor, the Norse god of thunder.

According to Marvel Universe the blacksmiths used the core of a star as a forge to construct Mjölnir.

[at Thor's coronation] Odin: Thor Odinson, my heir, my first born. So long entrusted with the mighty hammer, Mjölnir, forged in the heart of a dying star. It's power has no equal! It's a weapon to destroy or as a tool to build. It is a fit companion for a king. I have defended Asgard, and the lives of the innocent across my realms in the time of the great beginning.

Asgardians are presented in the Marvel Universe as 'just' an advanced, physically durable and long lived race with strange technology. So has there actually been any attempt to show or explain how blacksmiths could actually survive inside the heart of a dying star?

You're misreading the passage. The blacksmith Eitri and his assistants Brok and Buri used the core of a dying star as the heat source to "forge a mold with which he birthed Mjolnir".

This "heart" (which presumably also served to heat the Uru from which the hammer is constructed) was not inside the star at the time but rather had already been ejected from the star as it exploded or collapsed. 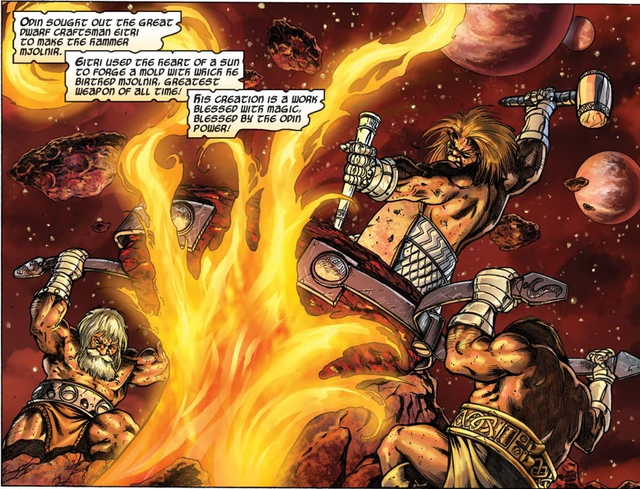 No one ever said that the blacksmiths had to be inside the star, just like blacksmiths here on Earth don't have to jump into big piles of hot coals themselves...

The material and technology would certainly be strange and advanced, but not surreal =)

I always took this to mean that as the star died and collapsed down into itself it would begin to create the heavier elements, as is the nature of giant stars that die, the bigger the star the heavier the elements that can be produced.

The material that would become the head of the hammer was therefore FORGED by the star itself dying, not by blacksmiths literally being inside the star as it died forging this. Once the star was dead it would most likely have gone supernova and ejected all the heaver elements out, again as is the nature of stars.

The Asguardians would have then found this extremely dense material and thought, lets turn this into a hammmer, they would have then shaped this, put the inscription on it and stuck a handle into it.

it wasn't forged in a dying star. In fact, it was made by two dwarves in a hut, brock and his brother whose name i forget. It was because of loki that it was made. loki was going to get sif some new, golden hair. He got it, walked by the dwarves's hut, and boasted aboutthe golden hair. Offended, the dwarves made three things, a golden boar, a ship that always has wind in it's sail, and mjolnir, whose handle was a little too short. that's how it was REALLY made.

Well, Dwarfs are not considered Asgardians. They belonged to a completely different race of beings. They were bred since the first dwarf to withstand extreme temperatures, some even being completely unfased by any heat. What throws this theory out of the window though is there clothing :/. But combined with this theory that someone above me posted

The Asgardians would have then found this extremely dense material and thought, lets turn this into a hammer, they would have then shaped this, put the inscription on it and stuck a handle into it.

could mean that the dwarfs could withstand intense but no too intense heat. Norse mythology makes the dwarfs all look like forgers that have no problem with any kind of heat.(It is said tho that the hammer was made in a dying star and not out of a dying star.

26
How much would Thor's hammer (Mjolnir) weigh?
15
Does being worthy negate the weight of Mjolnir?
0
If Thor's hammer is so heavy, why does it not crush the table it is on?

26
How much would Thor's hammer (Mjolnir) weigh?
14
How can The Accursed One deflect Thor's Hammer?
15
Does being worthy negate the weight of Mjolnir?
56
Was Mjolnir ever used for building something?
22
If Mjolnir was made for Thor, why is Hela seen using it in Thor: Ragnarok before it was even given to him?
10
Does Thor's hammer give power or channel it?
33
What is the prop for Thor's hammer (Mjölnir) made of?
22
How many people can lift Thor's hammer?