What was the significance of the weapon locked in Alice's drawer?

I missed out on playing the Resident Evil computer games, but enjoyed the films. What was the significance of the weapon amnesia Alice (1st film) discovers in her bedroom drawer?

Was it a nod to the Resident Evil computer game in which (I imagine) she would have had to gather the combination some place in the game so she could access the weapon? Or was it just a throwaway scene in the movie?

When Alice wakes up she has no memory of her former life, nor is she aware that she is supposed to provide security for the secondary entrance to the Hive. As a security officer, she would have had ready access to the weapons drawer (containing the two Heckler & Koch MP5s) and known the code had she not been deliberately targeted with an amnesia-causing agent by the Red Queen.

From a movie-making perspective, the scene is a way of connecting the opening scenes to the false mansion and showing the audience that behind the humdrum facade, another world awaits.

ALICE stands before an ancient wooden dresser with three drawers. She opens them one at a time.

The third, a pair of Uzis with laser sighting, under-slung with miniature grenade launchers.

ALICE stares at the weaponry. The look on her face says it all. Who am I? 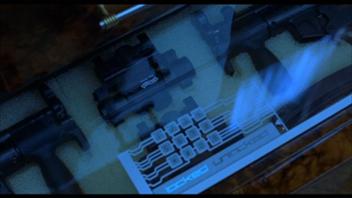 On top of all of that, the film owes a great deal to its computer game roots where keypads and code-hunts are a regular feature; 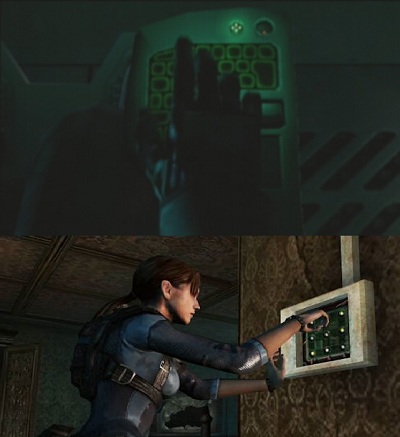 Not the answer you're looking for? Browse other questions tagged resident-evil or ask your own question.

4
Alice's connection with her clones in the simulations
6
What happened to all the other Alice clones?
3
What is the video tape in the Resident Evil 7 demo intro referring to?
3
What happened in "humanity's last stand" at the end of Resident Evil retribution?
0
Why did the Red Queen murder Wesker if she was programmed to value human life?