What book had a Japanese title, a futuristic samurai head on the cover, and spelled America “Amerika”?

I got a book a couple years ago from a retail store. It was a pretty old book but in good condition. However I don't have it anymore, it was lost while moving.

The edition I had had a cover with a futuristic-looking samurai in the background floating-head style and a spaceship in the foreground if I remember correctly. It was titled something Japanese or pseudo-Japanese, with perhaps an exclamation point and a subtitle. It was a large book, about 400-700 pages. I'm also pretty sure it was part of a trilogy or quadrilogy. I don't remember much of the plot beyond the fact that there was a spaceship called the "New New York" and that America was instead called "Amerika" in the book. I know it's not much to go on, but I'm hoping somebody who has read the book remembers these details.

Edit: Unfortunately I can't recall any specific scenes. I think that the book might have shifted perspective between several characters, not entirely sure. The title of the book probably started with a T or a K. I asked this question on Yahoo Answers a few days ago and the book Kensho by Dennis Schmidt was suggested, but besides being part of a series and with a Japanese title, I can't find any info that would confirm it; I can't find any book of that series that was released with a cover like the one I remember, no results for "Amerika" or "New New York" with the titles of the book, and there are no good summaries I can find of it either, and the few pieces of information I can find on it seem to be nothing like the book I'm thinking of. Stylistically though, the cover of Kensho is similar to the one I'm thinking of. It had a red font and blurb next to the title, except on the bottom I believe. 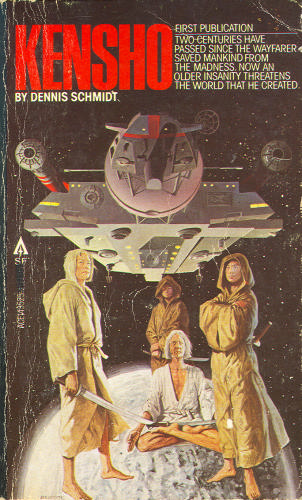 That's all I remember.

A bit of Googling throws up that Dennis Schmidt wrote the Kensho series, consisting of the novels:

From that series Satori would seem to be the best fit - it "sounds Japanese" and the cover loosely matches your description - and to my eye it could be by the same artist as the cover you posted. 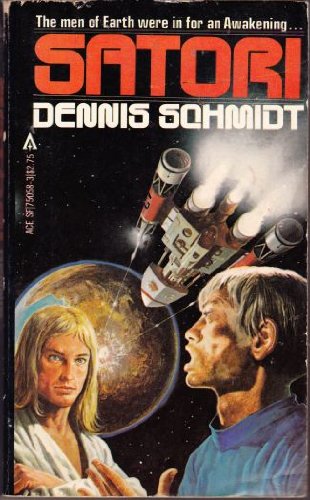 22
Looking for the title of a futuristic book about enforced equality
7
What's the book title: woman fleeing from earth, war between liberal colony and earth
7
Japanese Book - "When all the cats in the world had died"
7
Olympian Gods in Modern Times
3
YA book about a ghost boy and the attempt to put him to rest
6
What book had a robot going around the galaxy, making other robots?
24
A fantasy book with seven white haired women on the cover