What exactly happened to Thranduil's face while he was arguing with Thorin?

In the heated discussion between Thranduil and Thorin, for a moment, Thranduil's face suddenly turned very deeply scarred & wounded and then immediately returned to normal. What was this about? Is it a reference to anything that was cut out of the movies? (I have not read the books, sadly, but am very curious about this.) 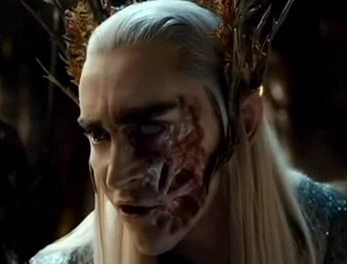 I found this source but I don't know whether it is what you are after.

I have also found this reference which seems to state that Tolkien made no reference to the Scars on Thranduil's face in the books.

Thranduil's scars are decidedly non-canon. According to Tolkien's texts, the last battle Thranduil saw (up to setting in The Hobbit) was that of the last alliance at the end of The Second Age. However, in the 1900's of the Third Age, according to text, the "serpents of the north" were fought and mostly slain. In all likelihood, Peter Jackson is taking creative liberty with the story. On a more symbolic note, the scars could represent the pain Thranduil has endured in war (he watched his father die in the battle of the last alliance).

This is discussed in the Director's commentary. Thranduil's prior encounter with dragons (which the Director happily admits is not from the books) was included to explain his deep isolationism and the reason why he wouldn't help the dwarves. There's also the suggestion that a firedrake killed his wife, explaining her absence from the film.

As to the sudden appearance of his scars, the implication is that he normally uses Elven magic to disguise them. To emphasise his little speech, he allows this 'glamour' to drop momentarily.

Peter Jackson: What's interesting is that Thranduil's had this encounter with dragons before ... and his wife was ...

Boyens: There's a conceit we came up with. Actors need that. They need to feed on that backstory. Where did this isolationism come from?

I also like the notion that this very 'closed off' character is also one of the greatest fighters on Middle Earth.

Thranduil mentions that (Paraphrasing because of memory) "Do not talk to me of Dragon Fire, I have felt is wrath and ruin. I have faced the Serpents of the North". Although I don't think Tolkien made any canon mention of these fights, or none that I've found. I think Peter Jackson did this to add some common ground between Thranduil and the Dwarves that I'm sure will play some part in the third film.

I read the Silmarillion many years ago, and I immediately assumed, when Thranduil mentioned the serpents of the north, that PJ concocted a history where Thranduil had a run-in with one of the dragons from Angband somewhere in the First Age, when he still lived in Doriath. It is plausible.

I did not think the scars were real; I thought he summoned the memory of the wound and it manifested on his face briefly. But I really think the 'scar' was the illusion, not the reality as so many others think.

The book does not refer to any scar or to Thranduil being somehow disabled, but the movie makes it seem so ´cause the Movie!Thranduil has an extensive scar and an apparently blind eye as a result of the scarring (caused by the dragon fire).

What does it mean in the movie? I dunno, I was baffled, too. But I understand it in two ways:

My guess is that PJ took the fear/hroa concept one step further to expose the hubris of Elven arrogance/beauty. Translation: dragon's fire is the one thing elves cannot fully heal and scars permanently.

There is a trope common among many fantasy stories that Elves have a special power called Glamour, which is a kind of magical make-up.

In the Sandman comics, an Elf girl is given to the Dream Lord, and he tells her that she doesn't need to use her Glamour in the land of Dream; she suddenly becomes much shorter, older, and uglier. I seem to recall something similar in Spencer's The Fairy Queen (the distinction between Elves and Fairies has not always been so clear, cf. Fairies by Brian Froud).

Under this interpretation, the scars are real, and Thranduil's normal fair appearance is an enchantment or spell that he casts over himself.

luser droogluser droog
2,34322 gold badges1919 silver badges3131 bronze badges
1
Add a comment  |
-1
Want to improve this post? Provide detailed answers to this question, including citations and an explanation of why your answer is correct. Answers without enough detail may be edited or deleted.

I think somewhere along the line Thranduil did face 'the serpents of the North', and instead of his scars appearing in moments of anger he chooses to have them be shown to prove to Thorin of his hardship.

Thranduil is a survivor of Doriath, which was destroyed, in part by fire drakes, in 506 FA; it was here that he was burned by a dragon (the 'serpents of the north' he mentions). He hides the burn scars with illusions but they're still there which is why he tells Thorin he knows all about dragon fire. He got burned by one and it was permanent. I'm pretty sure it's in the Silmarillion book by Tolkien, the history of middle earth.

I think he was scarred by a dragon sometime in the past and that the gems he seeks (which he asks Thorin for in exchange for there freedom) somehow allow a spell of illusion to hide the scar. Watch again and you'll notice he is wearing a ring with a white stone in it... is this the same gem he is seeking? We know that elves are obsessed with outward appearance and beauty... for one to be so scarred would be a terrible thing.

Not the answer you're looking for? Browse other questions tagged tolkiens-legendarium the-hobbit desolation-of-smaug or ask your own question.