Did Jabba have his own personal spacecraft?

This question asking how Luke knew R2D2 would be on Jabba's sailbarge made me wonder why R2 would be assigned as a bartender, rather than playing to his obvious specialty.

I know Jabba got his start gunrunning, and was a pilot during that time.

Is there any canon evidence that he maintained his own spacecraft at or near his palace on Tatooine? Of particular interest would be the time period during the events of Return of the Jedi.

Yes, Jabba had his own ship. It was called the 'Star Jewel' and appeared in a variety of Expanded Universe (EU) sources including Star Wars: Dark Forces, in various books including the Han Solo Trilogy and some Star Wars comics.

As far as I'm aware, it's never been mentioned in a 'G-canon' source such as a TV show or film, nor is it even hinted-at in situations where it would theoretically have been of great use such as the sequence in Clone Wars where Jabba's son is kidnapped and taken off-world.

The ship itself bears a similarity to Jabba's sailbarge, including the sloped front, flattened rear and colour pattern (brown on brown). It apparently had a cloaking device and is described (in Darth Plagueis) as;

"A space cruiser of gargantuan size and ostentatious design...Shaped like an arrowhead, the vessel was heavily armed and large enough to accommodate half a dozen starfighters." 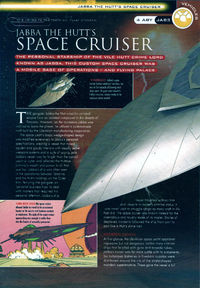 60
How did Jabba become such a powerful crime lord?
18
How did Luke know that R2D2 would be on Jabba's barge?

44
Why did Han Solo have to pay off Jabba?
63
Kessel Run in 12 parsecs: screenplay error, or part of the movie?
12
Did Boba-Fett ever have children (or clones) of his own?
21
How did R2D2 smuggle the lightsaber into Jabba's palace?
4
Any official evidence that Rey is based on early "Star Wars" concept art?
5
Why not upgrade C3PO's personality?
4
Did Vader know Luke was continuing to talk to Obi-Wan after he was killed?
8
Did Obi-Wan ever find out about Anakin going to Tatooine during Ep. II?
19
How does R2-D2 — or any astromech droid — routinely get into and out of a T-65 model X-Wing in the timeline of the original trilogy?