Do Hutts have a biological resistance to Force manipulation?

The question Why was Jabba immune to Luke's powers of the Force in Return of the Jedi? posits that Jedi Mind Tricks do not work on Jabba because he is strong willed.

This makes a good deal of sense, especially given Ben's quote.

BEN: The Force can have a strong influence on the weak-minded. You will find it a powerful ally.

In the movies, we also meet Watto who claims to be immune to mind tricks. His quote makes it sound like his entire species is immune, and not just him.

WATTO : No, they won'ta. What you think you're some kinda Jedi, waving your hand around like that? I'm a Toydarian. Mind tricks don'ta work on me-only money. No money, no parts! No deal! And no one else has a T-14 hyperdrive, I promise you that.

Similar to the Hutts, Toydarian brains have an unusual composition which made them immune to influence from the Force.

Although not common, Hutts were able to be Force-sensitive.

If one is Force-sensitive, they must be able to be influenced by the Force at some level.

Is there any evidence that other Hutts are, or are not, susceptible to Jedi Mind Tricks? Is there a biological component that only the Toydarian entry references, for some reason?

This passage in Wookieepedia appears to be a gross misinterpretation of information from The Jedi Path: A Manual For Students Of The Force, which is now Legends Canon.

The book mentions both species being "resistant" and "difficult to influence", but makes no mention of any immunity in any way. 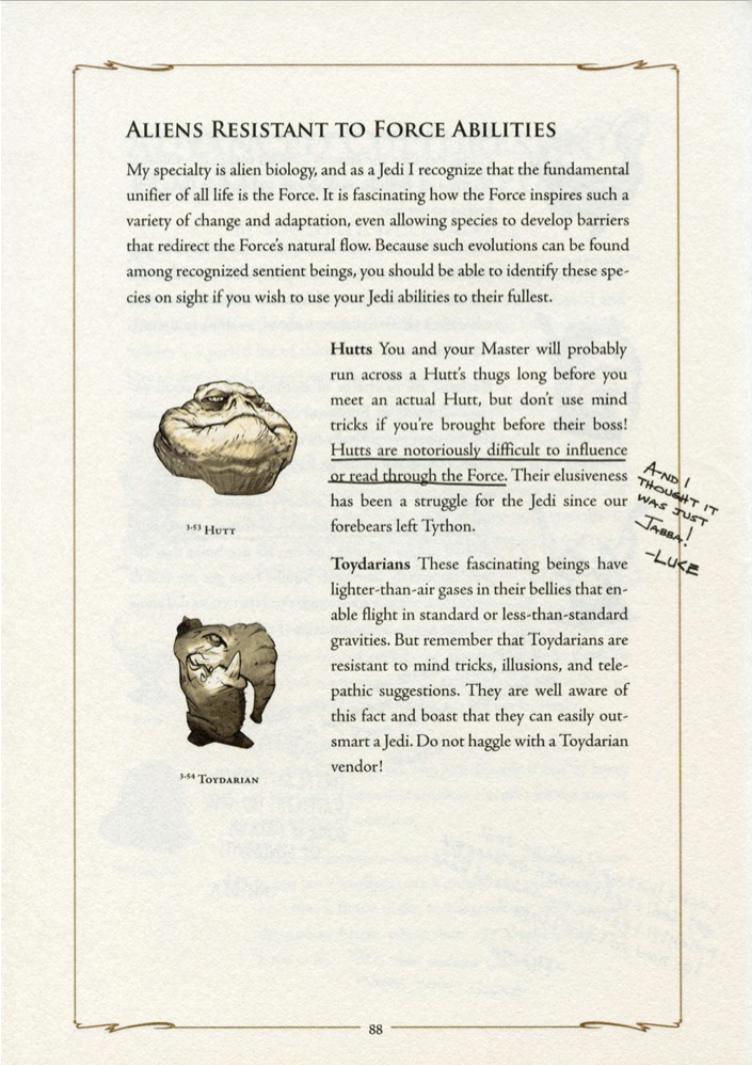 In the episode of Clone Wars The Hunt For Ziro (season 3), one of the Hutts mentions they TAUGHT their child to resist force mind tricks. Sorry I don't have an exact quote but it has been awhile since I have seen the episode. So depending on what level of canon you require, it is taught and not biological for Hutts.

Do not trust the Wookieepedia for answers. Ben was right in Star Wars... the Force can be used to trick the weak minded. Jabba was a crime lord and no fool, so he was smart enough to resist the influence Luke was trying to enforce. Likewise, Watto is probably voicing a stereotype for his people... not a fact.

43
Why was Jabba immune to Luke's powers of the Force in Return of the Jedi?
8
What makes Watto the Toydarian resistant to the Jedi?

10
Does the Force Have Color That Can Be Seen?
28
Why Didn't Qui-Gon Free Shmi Skywalker?
99
Why didn't Qui-Gon Jinn use his Jedi mind tricks to exchange his Republic credits?
8
What makes Watto the Toydarian resistant to the Jedi?
6
Does Sith Mind Control exist in canon?
47
How is it possible to do round swings with a lightsaber?
10
Why can't Jedi tell who can be mind tricked?
5
Have there ever been any Force users who didn't have natural talent?
14
What made Jabba immune to Jedi mind tricks?
3
Have any Force-sensitives ever produced "non-Force-sensitive" offspring?