How tightly can a starship turn while at warp?

We know that starships can change directions, turn, bank and dogfight at warp speeds. This is visually demonstrated on the Enterprise's view screen in "The Wounded" TNG 4x12, when the Nebula Class starship Phoenix (captained by Starfleet Captain Benjamin Maxwell) and 'flying' at warp in close formation with the escort ship Enterprise, suddenly changes course and banks hard right to pursue a Cardassian ship. 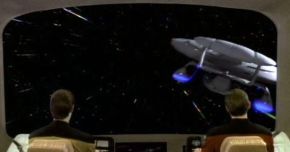 The question is; How tightly can they turn? As example; can they orbit a planet at warp speed?

Picard, Data, Yar and Troi enter the battle bridge, with Chief Miles O'Brien manning the conn. First, Picard orders that Yar fire photon torpedoes towards the object. Yar complies and the torpedoes are away. Shortly after, Picard orders that the countdown to saucer separation begin. Data counts down, and the ship separates while at warp. The stardrive section turns around and heads towards a confrontation with Q.

It would not be possible to orbit a planet at warp speed, due to the dangers of producing FTL warp fields in large gravity wells.

The enterprise had to reverse power (slow down or drop out of warp) to allow the saucer to escape after separating. there were no streaking stars in the turning shot suggesting the ship was at a sublight, though high speed.

"at the moment of separation, we will reverse power just enough to allow your saucer section to get out ahead and clear of us" - Picard, Encounter at Farpoint.

The TNG Technical Manual pages 95 and 96, state that changes in direction can be accomplished by varying the timing of the injectors, creating some differences in the warp fields produced by each nacelle. But also states that a loss of one or both nacelles at warp would tear the ship apart. Similar to turning a ship with two propellers by making one go faster than the other, it puts enormous strain on the hull. This suggests a limit to the warp turn speed.

Voyager's turning circle was clearly larger than the distance between two vacuoles, that's why the ship had to stop and turn. Turning at warp is not impossible, but not recommended. "When possible try to maintain a linear trajectory". Due to the speed and energy involved any unbalanced forces could be catastrophic. "faster than light, no left or right" is a good rule of thumb, though there are exceptions.

There is no canonical answer beyond, "Whatever the writers of a given episode write." There is simply no consistency in what can and cannot be done while traveling at warp speeds.

Warp Maneuvering
From the earliest days of warp flight the primary rule has always been, "Faster than light, no left or right." The truth is that making a Yaw (Port or Starboard) maneuvers at warp has always been possible - and with single-piece warp coils it is all that was possible - as it involves little more than applying a bit more energy to one nacelle or the other. The more energy applied, the greater the angular deviation; the greater the deviation, the greater the likelihood of a warp field imbalance and collapse, not to mention possible damage to the warp coils from too much energy or structural damage during a field collapse. So the primary reason for the old rule is safety.

From the Phoenix to the very early 24th century only Yaw and Roll maneuvers were possible at warp, Roll being a function of the RCS thrusters and having no effect on the overall course of the ship, even early 4 nacelle designs followed the rule due to the limitations of warp control software.
Come Generation 4 warp systems, like those of the Galaxy class, and the use of the split toroid warp coils, Pitch maneuvers were added to the mix; applying more energy to the upper or lower half of the toroid will allow a starship some limited +/- Z axis maneuvers during warp flight.

It must be noted that during any of these limited maneuver schemes, the starship will not actually change its directional orientation or bank with the turn, it will simply slide in the direction chosen, looking much like an automobile making slow, easy lane changes on a freeway.

12
Can a starship moving at warp 9.999 be hit from behind by a torpedo?
16
How is it remotely a good idea to fly into an anomaly you know nothing about?
13
Can you identify this Starship?
21
How could the Picard Maneuver confuse sensors from the Warp Era?
4
Can warp drive allow for light speed?
25
Did Sisko violate Starfleet regulations or Federation laws when he fired a torpedo to devastate a planet's atmosphere & force it's occupants to flee?
13
Is Sisko referring to the events of First Contact here and if so how does it affect things?
4
Can a starship fire at warp?
5
Could a shuttlecraft warp engine be used on a starship?