When I was a child, I read a number of Alfred Hitchcock's anthologies. One of them included a short story involving a man with a rare blood type who answers an advertisement for people paying for his blood type. I remember that he had a short aside about how people would criticize him for asking for payment, but that he felt that he should be compensated for his time and inconvenience, particularly since most blood donation places would just turn around and sell the blood to the patients who needed it. Anyhow, partway through the donation, he comes to a realization that the man he is providing the donation to is, in fact, a vampire, and one with a genetic condition that means that he can only drink rare blood types. I remember the narrator was disabused of a few traditional bits of vampire folklore by the vampire; I particularly remember the vampire claiming that the whole "catches fire in sunlight" thing was more along the lines of a really bad sunburn, raising blisters upon contact. At the end, the narrator agreed to come back for more donations. I remember the story's illustration involved an IV bag of blood with a vampire's face imposed upon it.

When I was last home, I looked through Witch's Brew and Spellbinders in Suspense (although I am told that this may have been a generic name for several of his collections) and did not find the story in them. I was fairly certain that we had a third book, but I could not find it in the time I had. Based on eliminating the anthologies that I did browse at home, it might have been in a volume that included two other stories. One involved a crystal bell that could bring people back to the life in exchange for the loss of another's life (initially, the bell didn't work, but someone realized that they had the clapper on their necklace) which ended with someone falling on the bell and having a shard pierce their heart. The other about a man who somehow bought two "knacks", in his case the ability to compose rhymes at any time (and, in fact, he couldn't stop rhyming) and the ability to "make money" which translated to him doodling out perfectly detailed dollar bills whenever his thoughts drifted. Faced with legal problems from accidentally counterfeiting, and his wife becoming increasingly annoyed at the rhyming, he somehow exchanged the gift of "making money" for the gift of silence, and started working for a greeting card company. I do believe those two stories were in the same anthology, but I am not 100% certain that it was with the same one as the vampire and the blood donor.

What a surprise to find people still talking about this story ("Blood Money") that I wrote when I was in graduate school. I did not realize it was in an Alfred Hitchcock anthology until a few years after it was published in London Mystery Magazine and a fan contacted me to let me know.

It appeared in the 1977 edition on page 70. A paperback version appeared in 1983. A friend found that in a used book store. Both also included Hugo winner "That Hellbound Train" by Robert Bloch (Psycho) and other notable writers. Very surprised to be in such better company.

I sold the copyright to London Mystery and have no idea where it went after that except it appeared in the 90s I think in a Scholastic school reader. A friend's son was in a class that received one. Another big surprise. 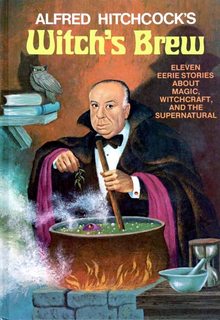 The story is called "Blood Money", and according to this site it's in Witch's Brew. 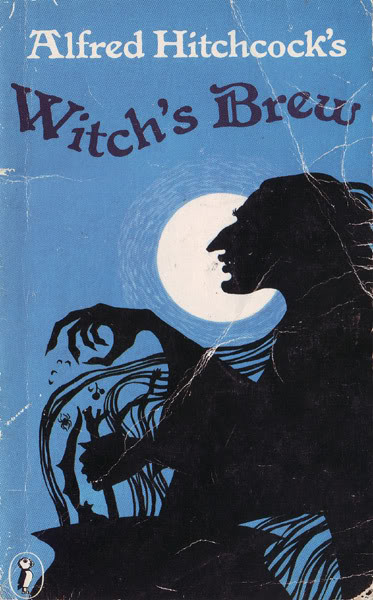 M. Timothy O'Keefe - Blood Money: Ashbury, possessed of a rare blood group, makes his living from regular donations to the Hospital and Blood Bank. Comes the day when he answers an advertisement placed in the newspaper and finds himself strapped to a bed, a vampire doctor hovering over him with a syringe. The undead have learned to adapt with the times.

According to this site it states the original "Blood Money" was in Witch's Brew from 1965, and the book I mentioned is a reprint I think in 1977.

6
What was the name of the anthology with a crystal bell that brings people to life and a man who gains a "knack" for counterfeiting?