What communications technology is used by Starfleet com badges?

A comment was posted on an answer to another question:

there will always be a time delay caused, the speed of light dictates the minimum delay between a signal being sent and received after all.

This is in reference to Starfleet com badges. It made me wonder: what's to say com badges use conventional radio, rather than subspace communications? I haven't given it a lot of thought, but I was under the impression that com badges were subspace.

It's explicitly stated in both the TV series (Voy: "Time and Again") and the TNG Technical Manual that the communicator badges contain "subspace" technology allowing faster-than-light communication.

JANEWAY: We can assume that Voyager will be looking for a way to reach us. I'll set my combadge to emit a subspace beacon...

I've edited the relevant sections in the picture below. There's also a handy constructor's guide showing the internal workings of the combadge. 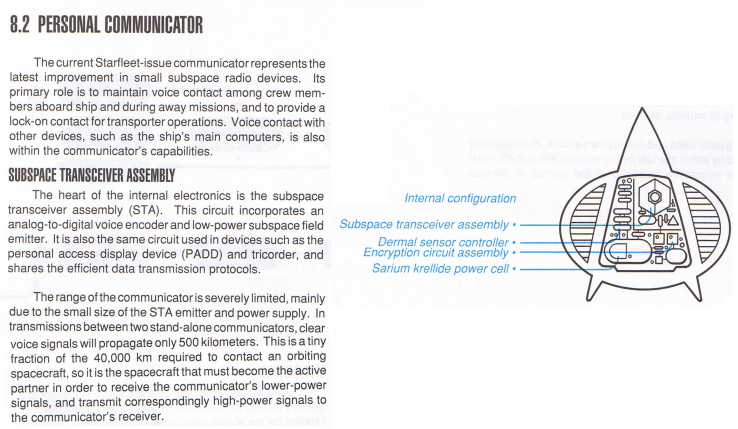 From quick research this is what I've gathered the Star Trek Wikia memory alpha.

I don't think it's clearly stated what form of communication it uses but there are some limitations to it such as range.

The Starfleet combadge was a crystalline composite of gold, microfilament, silicon, beryllium, and carbon-70. (TNG: "The Last Outpost", "Time's Arrow"; VOY: "Hope and Fear") Due to the size of the combadge, its working range was limited to five hundred kilometers, although a starship could boost the signal to bridge larger distances. (TNG: "11001001")

There's also no explicit mention of what's "under the hood" except other than what it's composed of and what the combadge can be modified / taken apart to achieve.

In emergency situations, a combadge could be modified for use in other applications. It could be converted into a subspace distress beacon, or the tiny power cell could be extracted for other uses. (DS9: "Rocks and Shoals") Lieutenant Worf used it to power a homemade field generator for several seconds. (TNG: "A Fistful of Datas") In 2374, Captain Kathryn Janeway of the USS Voyager was able to modify Seven of Nine's Borg implants to escape the brig of the USS Dauntless using pieces of her combadge. (VOY: "Hope and Fear") If the casing of the combadge was ever cracked, an emergency distress signal was emitted, mainly to help searchers locate victims. (TNG: "A Fistful of Datas"; VOY: "Time and Again") Combadges, when destroyed by an electrical force, could cause damage to the wearer's clothing. (TNG: "Thine Own Self")

As far as I can tell not much has changed in the combadges other than the designs. 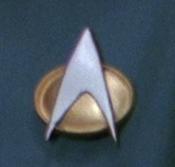 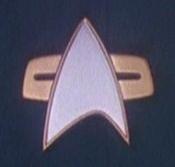 25
Why is there no combadge lag on initiating inter-personnel comms?

6
How do Starfleet Sensors Actually Work?
21
What is the white flag outside of Starfleet Academy?
29
How do the Star Trek com badges stay attached?
13
How do Com badges resolve naming conflicts in Star Trek?
8
Does Starfleet have self-activated teleport technology? If so, have they ever used it?
22
What do the badges on Kirk's dress uniform represent?
16
Why did Captain Janeway feel that using the Doctor as an expendable messenger boy was more important than keeping him around to heal the crew?
9
How do Starfleet comm badges know how to connect between personnel?
17
What is the communications range of a standard Starfleet combadge?