I am trying to find a book I read about 19 years ago. I think it was published in 1995 or earlier. The cover was multi-color, a drawing that was a combination of a line drawing and a cartoon-like feel. It was sort of “jungle” like in appearance, I think there was an “F” as the first letter of one of the words in the title. It was a fairly substantial book, maybe 300 pages or so.

One of the interesting features of the plot /characters in the story -- It was about a woman who goes to an earthlike planet where there are microbes (?) that “eat” metal – nothing on the planet made of metal survives.

The even more interesting aspect was on either that planet or another planet, animals and people were exchanging DNA such that people had attributes of many animals such as birds and chimps. Once they had become these hybrids, they no longer really wanted to participate in “human civilization” as we know it. If you weren’t careful, you might become a hybrid without meaning to do so, but you could also deliberately choose to become a hybrid.

In the end the woman (I think) ends up becoming a hybrid as well.

Most of the story took place on another planet, I think, but some may have occurred on Earth as well because I seem to remember the continent of Africa figured in prominently. 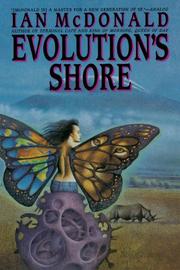 Optimistic near-future alien-contact yarn from the Ireland resident author of the gloomy The Broken Land (1992), etc. In 2003, Saturn's moon Hyperion unaccountably vanishes, while large meteorites strike Earth's tropic regions. As a result, Kenya's Mt. Kilimanjaro becomes infested with a weird alien growth, called the ``Chaga,'' that absorbs all organic materials. As the Chaga rapidly expands, SkyNet assigns ambitious Irish TV journalist Gaby McAslan to cover the story. In Nairobi, she makes a deal with local data pirate and gangster Haran--who soon provides her first scoop. Hang- glider pilot Peter Werther died and was absorbed by the Chaga, which then resurrected him. He claims that the Chaga is alive, aware, benevolent, and has contacted Earth before. Soon Werther disappears, captured by the ruthless UN quarantine forces. As Gaby and her American scientist friend, Shepard, become lovers, they discover that people can survive in the Chaga--indeed, it alters itself to suit human needs, providing food, clothing, shelter, even organic electronic equipment. Gaby's stormy relationships (with Africa, with Shepard) ebb and flow, while Africans build whole new cities within the Chaga and experiment with alternate lifestyles beyond UN censure. Eventually, Hyperion--transformed into the Big Dumb Object, a Chaga-built space habitat--arrives in Earth's orbit, heralding a new phase to the contact process. The obvious exemplar here is Stanislaw Lem's Solaris (1970). Yet McDonald's tale is also inventive and challenging, despite that disappointing non-ending: a dense, complex, rather weighty, often fascinating piece of speculation.

An "answer" was posted by a different account claiming that this was the answer, but without any proof that they were the querent.

Not the answer you're looking for? Browse other questions tagged story-identification novel technology genetics or ask your own question.

7
Fantasy / Sci-Fi book featuring humans stranded on planet which degrades metal
5
Sci-fi series where humans are reduced to a mathematical pattern and sent to another planet
8
Trying to identify a book about male teen with psychic powers, published before 1995
13
Book about training for and surviving on a deadly planet
5
Science fiction horror book about humans regressing into animals