Why was Toothless toothless?

When Hiccup first meets Toothless, he is menaced by a mouthful of sharp teeth.

The next time they meet, Hiccup notices that Toothless appears to have no teeth (leading to his name), only to have a full mouthful of teeth spring out from the gums.

It seems they are retractable, but that seems to be a rather odd feature, and I can't think of any other creatures that have retractable teeth (short of vampire fangs). 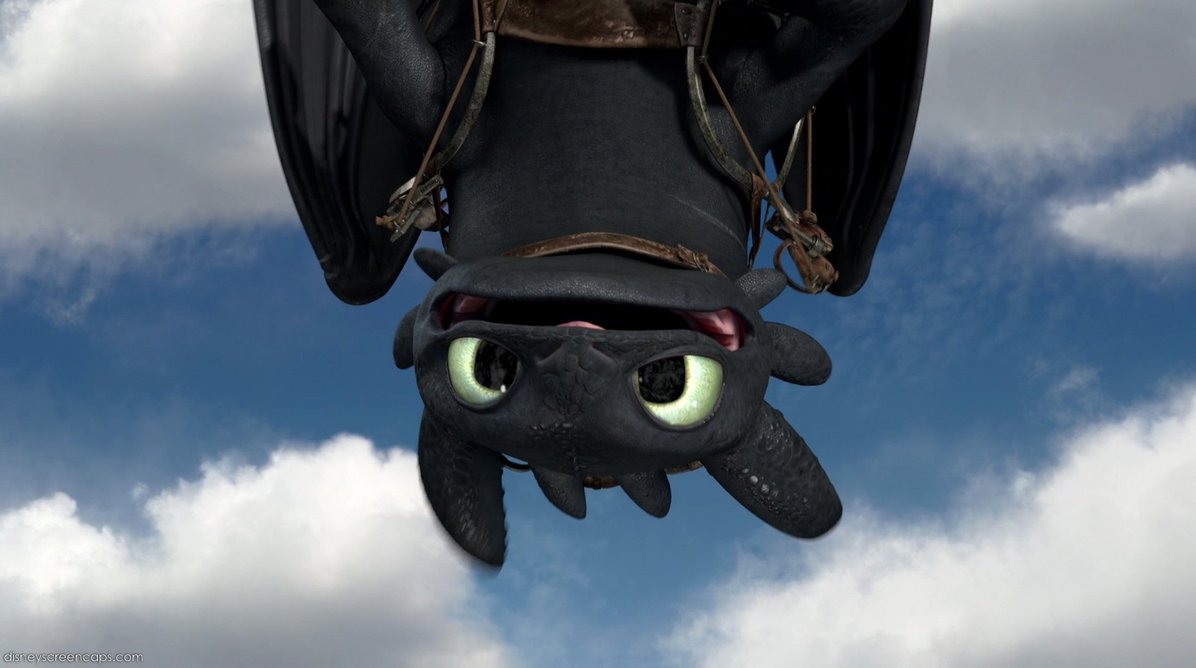 Is any explanation given for why his teeth are retractable? I don't recall hearing anything about it in the movie, but I know it is based on books, plus a bunch of supplemental materials are available.

Unfortunately I haven't really read the books but as far as the movie franchise there's nothing really saying why Toothless has retractable teeth although it's most likely a common trait for Night Furies.

Toothless gets his name from his sets of retractable teeth. Toothless is the only Night Fury seen thus far in the franchise, so his physical appearance is all that can be studied to learn about Night Fury anatomy.

Other than that I don't believe there's a canon answer. Although in real life Sharks actually have retractable teeth.

There are other animals that have retractable teeth like Anglerfish as well.

When the anglerfish’s jaw opens, it creates suction that pulls her victim inside. In some species, retractable teeth spring down, trapping the meal. An expand­able stomach can hold fish larger than the anglerfish herself. High-speed cinematography from the University of Washington has revealed that anglerfish can pop open their mouths in just four milliseconds.

I don't think it's explained in the movie but in the book version he is named "Toothless" and is actually completely toothless.

Maybe they didn't want to change his name for the movie and made him (seemingly) toothless because of that.

It makes sense for a fire-breathing dragon (who, in HTTYD, breathes fire by igniting a napalm-like gel) to be able to retract his teeth to prevent damage while expelling the substance.

For the movie Toothless is based on a cat, so his teeth could be like the claws of a cat, only coming out when needed. I have not read the book, so this is a guess - but do the Vikings not have a tradition of naming people with silly or demeaning names so the babies won't get stolen by fairies. Naming a fierce Dragon toothless, is kind of like naming a powerful Viking Scrawny.

If any of you have seen the second movie then you would have realised that not even Hiccup's mother knew that night furies could retract their teeth. "Retractible teeth?! How on earth did you manage?" She is surprised by Toothless's teeth so maybe he is one of a kind. Maybe he is a whole new sub-species of night fury, a more dominant one seeing as he became the alpha just to protect his friends and family from the evil Bewilderbeast.

It is mentioned on some sites that his retractable teeth help him hook on to pray for a more powerful grip and bite. So in a way they help with hunting, and in fights. This is just a theroy, but they could also help to protect his mouth, since his mouth is flat.

Not the answer you're looking for? Browse other questions tagged how-to-train-your-dragon or ask your own question.

38
What did Toothless draw?
11
Why is Hiccup called Hiccup?
3
Why is Berk vulnerable to attack?
4
What makes Toothless the king of dragons in the Hidden World?
2
Why is there a Bewilderbeast responding to king Toothless in HTTYD 3?
1
Why did all the dragons leave Hiccup's team right after Grimmel kidnapped Toothless & the Light Fury?
3
Why did Snotlout say, "That's two for me"?
0
Why did Grimmel say, "No surprises"?