I am looking for the title of a book which I read in the 1960's. It is about a time gate opening up form which an army from the future appears to conquer their past. They are able to do so because of a book passed down from generation to generation describing how and when the enemy would attack.

The Book cover had a time arch (like St. Lois arch) with rainbow colors.

What is the name of this SF story?

story-identification time-travel
Share
Improve this question
edited May 30, 2014 at 3:28

The most likely candidate is INVASION FROM 2500 by Norman Edwards and published by Monarch Books in 1964. And, yes, there is a glowing arch with a line of futuristic tanks emerging. The novel has the following apt dedication: "To Terry Carr and Ted White, who made this book possible". Terry Carr and Ted White collaborated under the pseudonym of "Norman Edwards", so they certainly made the book possible. Your memory had added the fancy details of rainbow colors. The arch on the cover is a golden color and surrounded by a bright white glow.

The blurb on the back cover has this evocative quotation: "Jack stopped the car and ran toward the light. He was greeted by a fantastic sight: a huge, weirdly glowing arch, through which were pouring strange-looking tanks, airships and metallic-clad soldiers carrying sinister weapons." 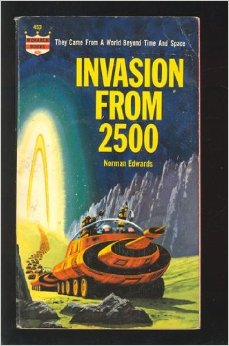 7
YA novel about time travel and a strange box
11
Book about accidental time travel using a mirror to ancient Egypt
11
Book with time travel and aliens using collars to mind control
3
Time travel book involving an agency that fixes the past, which is largely meddled with by strawman liberals
6
What 90's made-for-tv movie featured a time-traveling policeman who left his wife a note from the past?
9
Looking for title of a sci-fi book about dystopian future with implantable devices