I don't remember any language classes having been taught at Hogwarts, nor do I remember any spells which would make someone understand a foreign human language. How do wizards communicate with people from other countries?

In the Goblet of Fire it seems that all the French and Bulgarian students speak English quite well. In the Muggle world English is learned all over the world because it's the primary language of science, diplomacy, commerce, and of the Internet, but neither of these is a factor in the Wizarding world. As old-fashioned the Wizarding world is, I would have guessed they were more likely to use Latin or French for diplomacy, as English as a lingua franca of most of the planet only emerged quite recently.

So how do wizards learn a foreign (human) language? Is there a magical way to understand a foreign language?

The advert below ran in the Daily Prophet, and would have been seen in the film 'Harry Potter and the Half-Blood Prince' had the scene not been cut.

Evidently, Wizards who wish to learn foreign languages may attend one of various Euro-Gyph language schools dotted around Europe. Although the school is noted for concentrating on "Extraordinary Languages", I see no obvious reason why French or Chinese wouldn't qualify as such in the Wizard world. 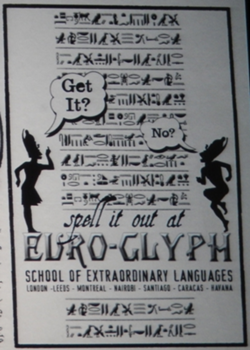 There is evidence that Wizards/Witches take an interest in literature outside of the Wizarding world.

As JKR points out in her footnotes in ToBtB:

...[This quotation demonstrates that Albus Dumbledore was not only exceptionally well-read in Wizarding terms, but also that he was familiar with the writings of Muggle poet Alexander Pope. --JKR]...

-Footnotes, The Tale of the Three Brothers, Tales of Beedle the Bard.

Given that; we see that the Magical folk do have access and exposure to Muggle writings and literature, if they so choose - this can include learner guides and so on such as http://www.dummies.com/store/Education/Language-Learning.html.

There is also the Department of International Magical Cooperation within the Ministry of Magic.

Some of its duties include:

Assumption territory here: the Ministry has many resources, both domestic and foreign. It would be easy for them to have books and/or training or classes to learn different languages, especially in cooperation of foreign Wizards.

But it's safe to assume that they will probably need at least some understanding in other languages.

How do they learn? keep an eye out on this question: Are there spells for learning things in Potterverse?

27
How would schools that take in multiple nationalities address the language barrier issue?
8
Are there spells for learning things in Potterverse?

25
How and why was the Ministry of Magic founded?
18
What is the relationship between a spell's incantation and effect?
17
What language were Durmstrang classes taught in?
2
How did the wizards learn that electricity does not work around Hogwarts?
2
Was Isolt Sayre a Parselmouth or not?
6
Are Giants classified as Beasts or Beings?