How does Spider-Man climb walls?

How does Spider-Man's "sticky" powers work? If his ability to climb walls works in the same way as spiders and most other insects (e.g. due to Van der Waal's force of attraction) then his hand should have microhairs or thorn-like structures as shown in 2002 Spider-Man movie, which means he should not be able to climb walls while wearing his gloves since those structures can't pierce through gloves.

If the thorny structures are sharp enough to pierce through his clothes then how does he use his hands (like giving handshake to other people) without hurting them?

The only possible explanation is that spider man has some kind of re-tractable micro structures which allows him to climb wall and is sharp enough to pierce through his clothing. This offers him control while climbing wall and he can retract this structures into his skin so that he does not harm others with them (while giving handshake ). Moreover there is a possibility his skin may secrete some kind of fluid to increase this stickyness (whose secretion can be controlled by him).

A panel of biologists and physicists on the History Channel’s Spider-Man Tech suggested the barbed-hair on his fingertips (from the movie) could have the same effect as the miniature scopulae hairs on the ends of a spider’s feet. Spiders are able to climb up seemingly impossible surfaces like glass because the scopulae interact with the glass’s atoms causing a form of atomic static cling via the Van der Waals force

there is a possibility that this Van der Waals force may pass through his clothes thus not requiring the micro thorn structures to pass through the gloves.

Van der Waals force is nothing is the sum of the attractive or repulsive forces between molecules (or between parts of the same molecule) other than those due to covalent bonds, the hydrogen bonds, or the electrostatic interaction of ions with one another or with neutral molecules or charged molecules as given in wikipedia

which indicates the presence of dipole.So what electro essentially does that is change the charge (he essentially neutralizes the dipole induced by spidermans fingers ) using his powers.

In the 2002 Spider-Man film we learn that he has retractable thorn-like structures that seem to emerge from his fingertips. These are extended when Peter tries to grab onto something like a wall and retract when they aren't in use.

As you can see from the images below, these are easily long enough to penetrate lycra gloves with a thickness of less than .5 mm

Within the wider Marvel universe, Spider-Man's ability to cling is not as a result of micro-hairs but some mumbo-jumbo about electrostatic forces, something which has been extensively discussed on Movies:SE

The idea that Peter Parker possesses micro-hairs along his hand is pretty good, but canon only to at least Sam Raimi's cinematic universe. There's no real substance to that in the comics. There's also an "official" handbook explanation, and that is that Spider-Man somehow can enhance the flux or inter-atomic forces between atoms to bond himself to any surface. The handbooks aren't exactly law, but probably the closest you'll get to a "canon" explanation.

Recently I've actually been developing a theory of my own to explain Spider-Man's ability to adhere to surfaces, and I believe it to be far more consistent with comic book showings and the ability of other characters.

And yes, that's ridiculous and not at all scientific, but you might be surprised at how many "spider-y" people there are in Earth-616 that possess strange bio-electrical abilities. Jessica Drew, the first Spider-Woman, is able to generate bio-electrical bursts of energy dubbed "Venom Blasts", used to concuss or overwhelm her enemies. Miles Morales, a Spider-Man from an alternative reality, possess this exact same ability. The generation of electricity obviously isn't at all very spider-like, yet these two characters possess this very same ability. Interestingly, Jessica Drew's power-set in general came from a very similar source as Peter Parker's as well, as she was bombarded with radiation and infused with spider genetics. 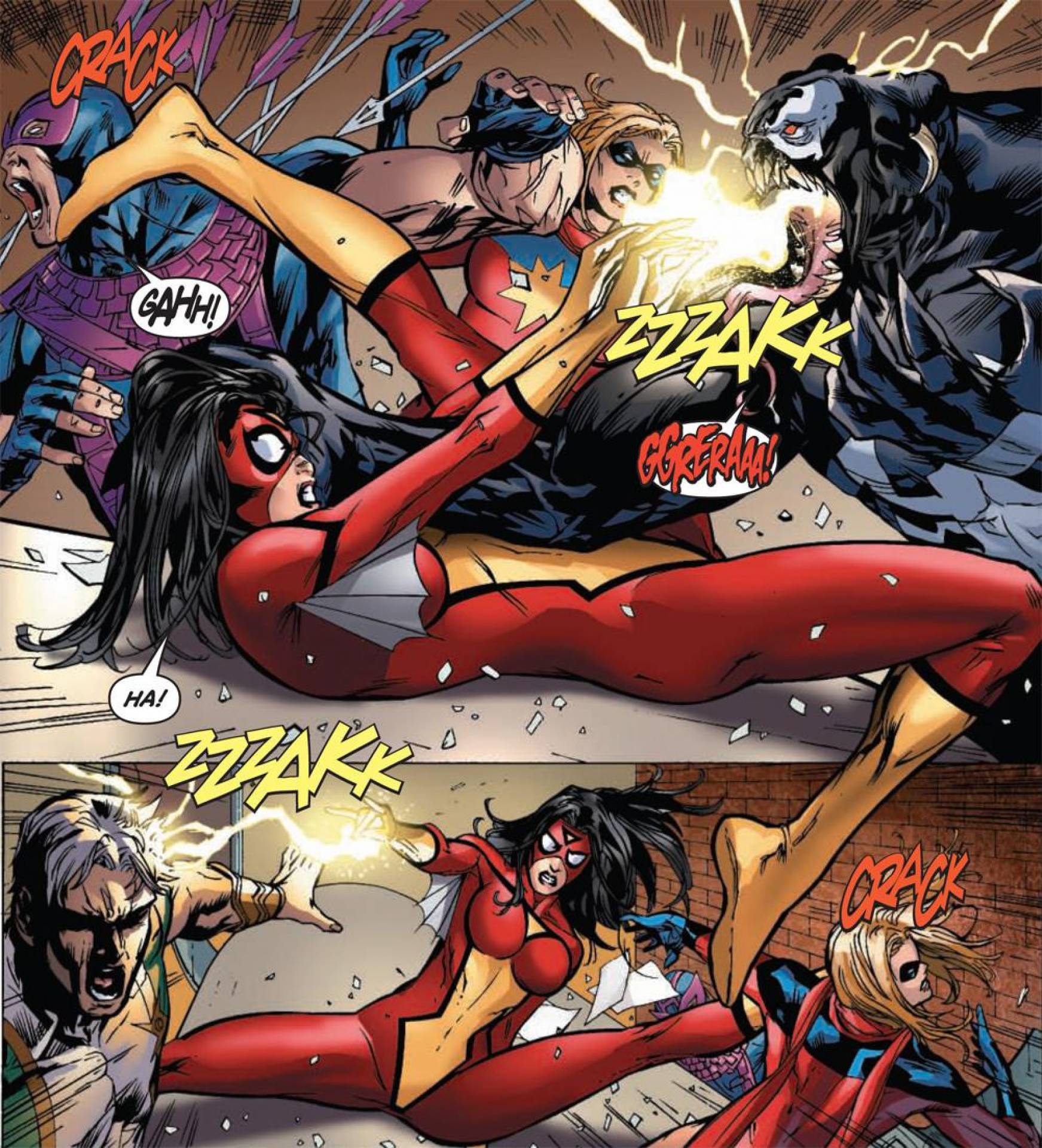 Though it is elaborated on in the official 1992 MARVEL handbook that Jessica Drew's ability to adhere to walls isn't through some bizarre electromagnetic effect, but through the excretion of an adhesive fluid from her pores, I think it could be argued that electromagnetic forces might still play a role. Electromagnets utilize something to channel a current through, so perhaps this fluid isn't necessarily sticky, but a ferromagnetic substance she can manipulate to her whim? Assuming this we could also start to consolidate all the different Spider-Men/Women's variations on wall-crawling abilities as only being partial explanations and mild variations of the same phenomenon.

Another character, Mayday Parker, the daughter of Spider-Man from Earth-982, provides even stronger evidence for Peter Parker's potential to generate electromagnetic attraction. She herself climbs surfaces with an ability dubbed "Bio-Magnetism", a strange power that not only allows her to generate a bio-electrical field that can be manipulated to magnetize herself to any surface but also repel herself from them. An interesting quirk of this power is that can magnetize people and objects around her merely by touching the surface they're in contact with. 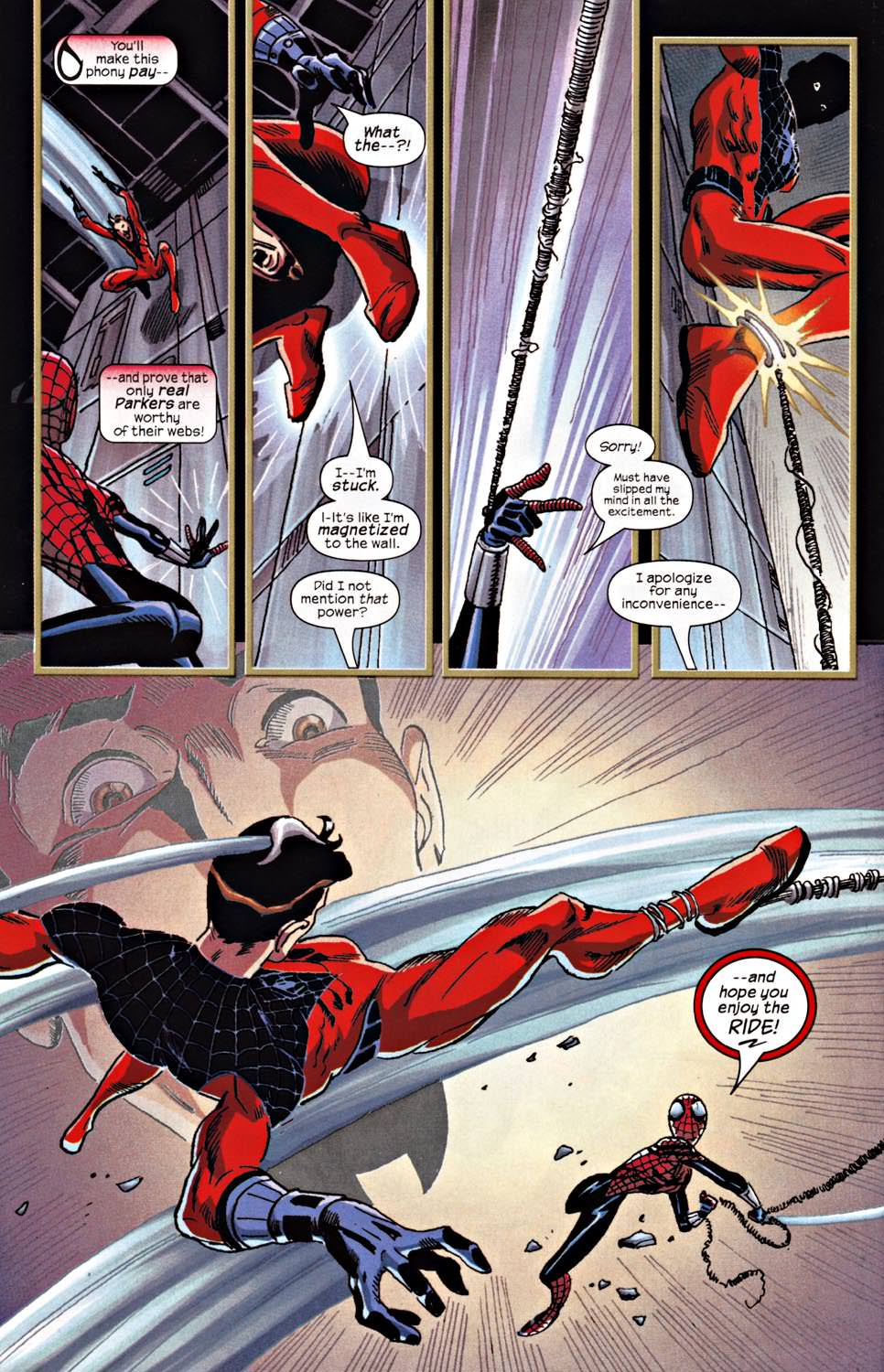 Though Spider-Man has never had a showing like this, it's not unreasonable to assume that his own biological daughter, who also possesses spider-like powers, derives her ability from his own. Peter Parker, as well as the other Spider-Men and Women, might even possess the same potential to perform these bio-magnetic feats but either are unaware, too inexperienced, or don't possess quite the same level of control over their own bio-electric fields. She implies the very same here, in Spider-Verse Team-Up #3. 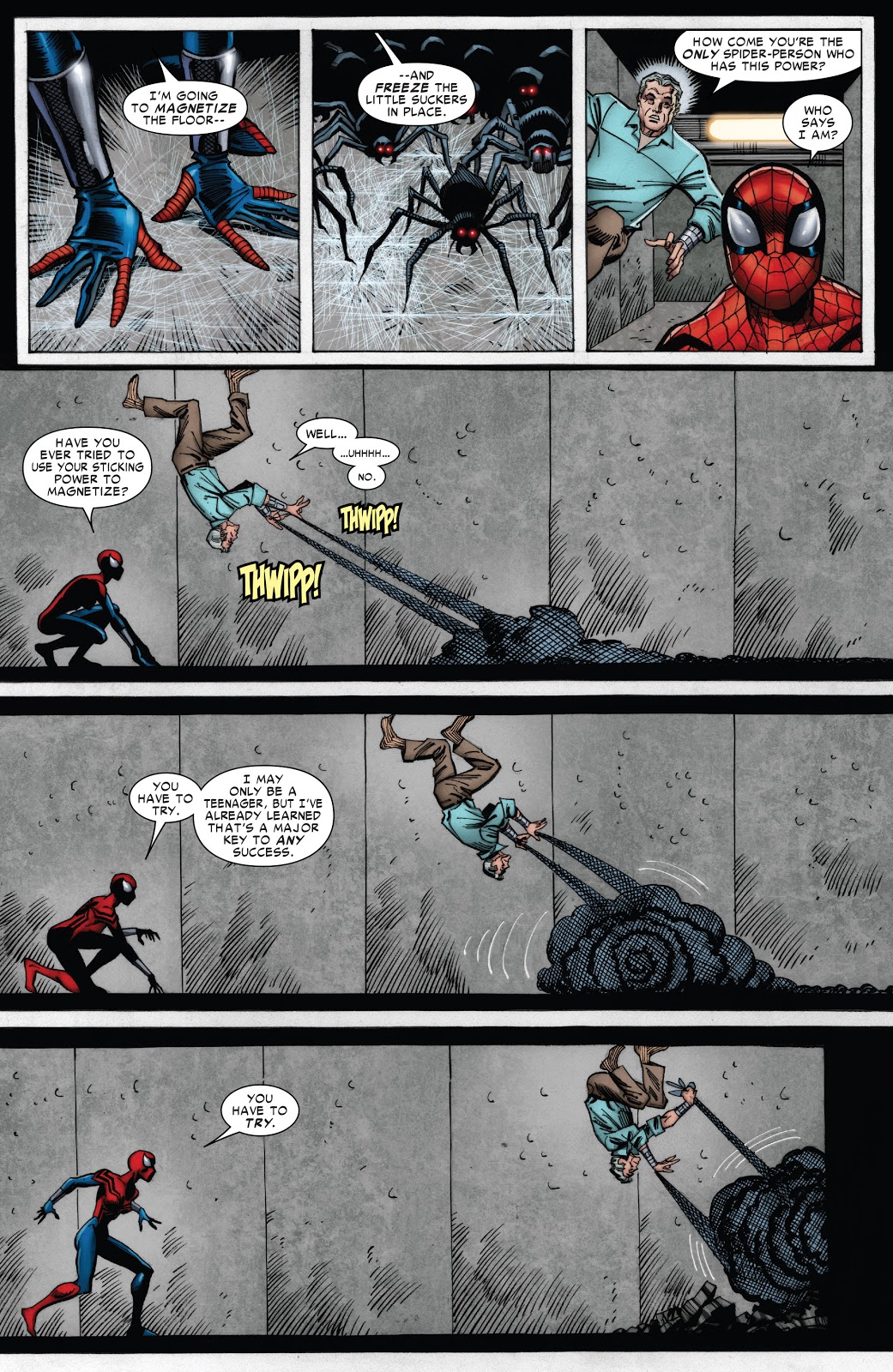 I think Bio-Electromagnetic attraction might also explain even "The Mark of Kaine", an ability of the Scarlet Spider (II). He uses his wall crawling ability to brutally disfigure the faces of others, tearing aware their skin and leaving unusual scarring. In this particular scene, smoke fumes can be seen rising from his finger tips as he performs this act. If he truly is just a more aggressive, but genetically identical copy of Peter Parker, then Peter should theoretically be able to do this too. Why smoke, though? Well, perhaps Kaine is simply "amping up" the bio-electric current pumping through him to electrocute and sear the flesh of his enemies. 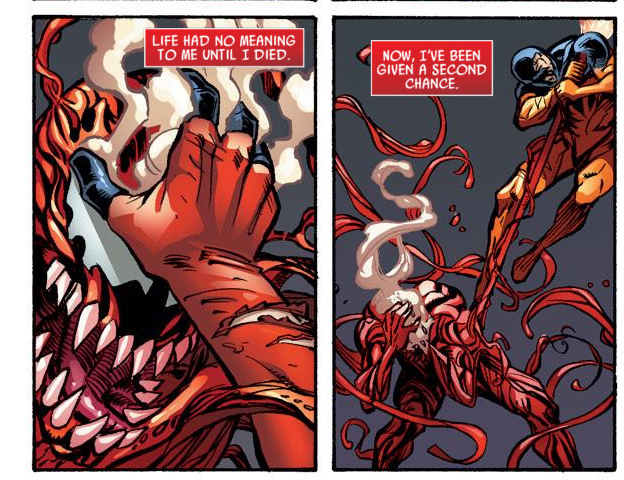 The idea of Spider-Man harnessing some electrical phenomenon to cling to surfaces isn't even a new idea. Stan Lee himself wrote that Spider-Man used static cling to achieve the illusion of a spider's adhesion, and this is how Electro was able to nullify Spider-Man's wall crawling grip. If he was harnessing this "bio-magnetic" force like his daughter, than this goofy bit of Silver-Age sci-fi could still be relevant to the science behind Spider-Man's wall-attachment capabilities.

The only part of this theory I'm not quite sold on is how or why his body would even act like an electromagnet. It's a very ridiculous, very un-spider-like explanation, but I think it nicely unifies the various wall-crawling explanations for Spider-People into one major ability, as well as illuminates the odd trend of powerful bio-electric powers they seem to possess...

tl;dr: Though the official MARVEL handbooks state Spider-Man's wall-crawling ability comes from some telekinetic alteration of inter-molecular bonds, I believe it's far more consistent with the source material that his unusual "stickiness" comes from the generation of a bio-electrical aura, and manipulation of it to electromagnetically attract himself to surfaces.

Spiderman does not have hairs on his hands like spiders, that is just a misconception. His sticky ability actually works by the electrostatic force... That's what a YouTuber said.

QWERTYQWERTY
11
3
Add a comment  |
Highly active question. Earn 10 reputation (not counting the association bonus) in order to answer this question. The reputation requirement helps protect this question from spam and non-answer activity.

Not the answer you're looking for? Browse other questions tagged spider-man powers marvel or ask your own question.