What is the area and population of Middle-earth?

Roughly speaking, what would be the area of Middle-earth? Would it be similar to that of Europe, or France or Eurasia?

And, when speaking of the population, I mean Men and Elves and Hobbits, and all more-or-less human-resembling races.

Much of Middle-earth has a definite European feel to it, and many of the characteristics of the races can be seen to have been based off of different areas around Europe. With the Shire in particular, being referenced as in the

"the North-West of the Old World, east of the Sea"

And in Letter 190 from The Letters of J.R.R. Tolkien he stated:

The only other point of comparison Tolkien gives is in one of his letters where he references the equivalent latitudes of a few locations in Middle-earth on the modern map:

As for the break down of the populations, which is what my answer will focus on as it is less conjecture, there is a reason that so much of it is humanoid. The origins of all of the Free Peoples of Middle-earth stem from or fairly closely involve Eru Ilùvatar, the single creator. He created Men and Elves, from whom more races came to be, such as Hobbits. The Ents were created by Eru as well, but in order to please Yavanna, and the Dwarves were created by Aulë but needed to receive his blessing in order to gain free will. Even the Orcs and Trolls, while created by Melkor as a twisted mockery of the Free Peoples, were based closely on the humanoid races that had been created previously.

While it is possible to trace characteristics of many of the Free Peoples back to different areas of Europe, the Orcs were based on stereotypes of Mongols.

The Orcs are definitely stated to be corruptions of the 'human' form seen in Elves and Men. They are (or were) squat, broad, flat-nosed, sallow-skinned, with wide mouths and slant eyes: in fact degraded and repulsive versions of the (to Europeans) least lovely Mongol-types

The only map with a scale is one that appears in the LotR books, which is named "The West of Middle-earth at the End of the Third Age", that is, a part of Middle-earth. There is a bigger version though, which shows more lands to the north and to the south. I don't know if it counts as a separate one.

One can measure the size of the lands as are shown in the said map (the smaller one). I did my own calculation with the help of some app, and I got roughly 5 million square kilometers, roughly half the size of Europe (9,938,000 sq km), many times bigger than France. The Atlas of Middle-earth gives an unofficial size of the Reunited Kingdom of Arnor and Gondor as 909,510 square miles (approximately 2.36 million square kilometers). I think my number is not far off. 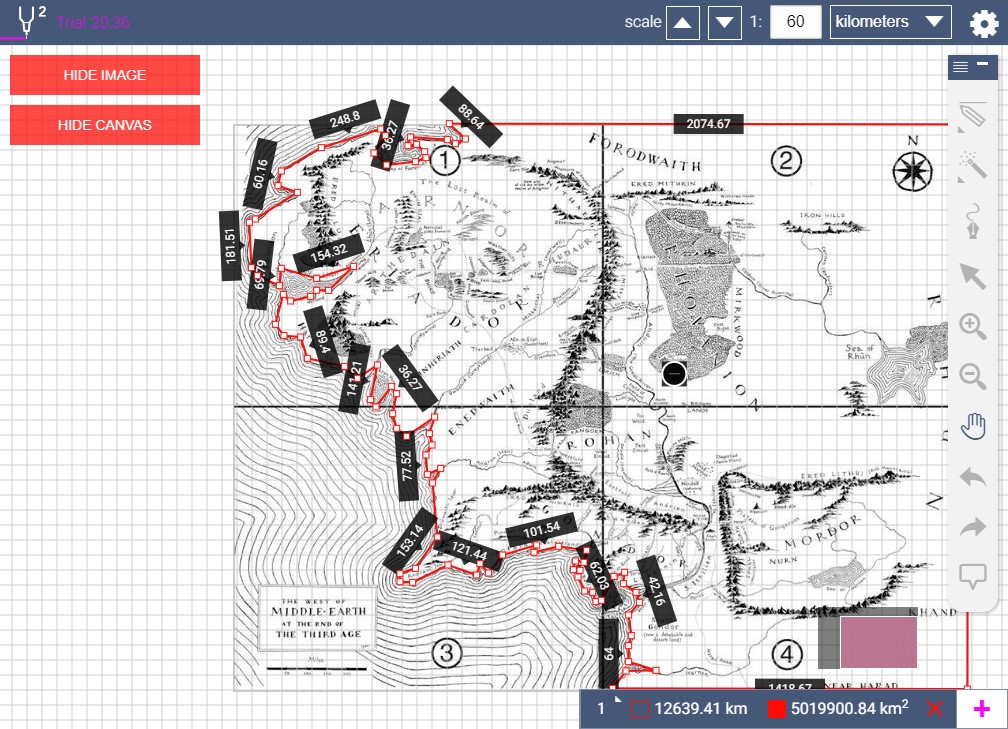 We don't have an official map of the entirety of Middle-earth that comes with a scale. Several full maps of different Ages can be found in The Shaping of Middle-earth, but they are only rough sketches. Too rough to tell from them how big they are compared to "the West of Middle-earth".

The geography of Middle-earth somehow shifted into the Earth we know today. The size of any continent is only one search away.

One can only speculate. And as is the case with the map, nothing is known about the east, the south, and the north of Middle-earth of the first four Ages.

We have very, very little hard data here, but I think there's enough to make a rough but useful estimate of population at the end of the Third Age.

First, I'm ignoring all the people but humans (Men and Hobbits) as there simply is too little known about the rest: High Elves and Dwarves are probably few in number, and Silvan Elves are nearly a complete mystery. A population estimate would be mostly handwaving, but what evidence we do have says that humans significantly outnumber Elves and Dwarves.

Second, I'm estimating only the Northwest of Middle-earth -- basically the area covered by LotR and The Hobbit. The East and Harad are clearly both inhabited by substantial human populations, but all you can say for sure is that their populations are not massively greater than that of the Northwest (or they would have long since won their wars with Gondor and Arnor) and not massively smaller (or else they would not have been a great threat.

At the end of the Third Age, much of the Northwest had small or no settled population.

In the westlands of Eriador, between the Misty Mountains and the Mountains of Lune, the Hobbits found both Men and Elves. Indeed, a remnant still dwelt there of the Dúnedain, the kings of Men that came over the Sea out of Westernesse; but they were dwindling fast and the lands of their North Kingdom were falling far and wide into waste. There was room and to spare for incomers, and ere long the Hobbits began to settle in ordered communities. Most of their earlier settlements had long disappeared and been forgotten in Bilbo's time; but one of the first to become important still endured, though reduced in size; this was at Bree and in the Chetwood that lay round about, some forty miles east of the Shire.

The area west of the Misty Mountains was empty and dangerous. Boromir travelled through it to get to Rivendell and said:

Therefore my brother, seeing how desperate was our need, was eager to heed the dream and seek for Imladris; but since the way was full of doubt and danger, I took the journey upon myself. Loth was my father to give me leave, and long have I wandered by roads forgotten, seeking the house of Elrond, of which many had heard, but few knew where it lay.'

The population centers are Gondor, Rohan and the Shire and there is a thinner population of Men around the edges of Mirkwood and in Dunland. Doubtless there are wantering people and occasional small farms scattered here and there elsewhere, but these people are rare. (Consider how few people the Frodo encountered once he'd left Bree. Tolkien never talks about the Fellowship having to evade communities of humans or of seeing farms.)

Gondor first. We know something about it, albeit indirectly, though the forces it was able to muster for the defence of Minas Tirith. The southern fiefs sent:

And that was all, less than three thousands full told. No more would come. Their cries and the tramp of their feet passed into the City and died away. The onlookers stood silent for a while.

Yet this was only a small part of the strength of Southern Gondor:

'Forlong!' men shouted. 'True heart, true friend! Forlong!' But when the men of Lossarnach had passed they muttered: 'So few! Two hundreds, what are they? We hoped for ten times the number. That will be the new tidings of the black fleet. They are sparing only a tithe of their strength. Still every little is a gain.'

It's not clear that this 10x factor applies to all the South, but assume it does: The South can field an army of 30,000 men.

How about Minas Tirith and its surrounding area. Its army is never numbered, but there's little evidence that the forces mustered at Minas Tirith before the arrival of the forces from the South was greater. So, say 3000 local troops.

That suggests that Gondor has about 33,000 men of fighting age. It's essentially a medieval economy, so we can estimate the total population using multiples from the European Middle Ages. There are a lot of numbers out there, but they are broadly consistant. Taking About History's numbers, the largest army England raised was around 30,000 and France (with twice the population) raised 60,000.

This lets us say with some confidence that Gondor had about the same population as England in the 1300s: about 3 million people, nearly all of whom lived to the south and west of Minas Tirith.

In The Muster of Rohan, Theoden says

When all is ordered we will set out. Ten thousand spears I might have sent riding over the plain to the dismay of your foes. It will be less now, I fear; for I will not leave my strongholds all unguarded. Yet six thousands at the least shall ride behind me. For say to Denethor that in this hour the King of the Mark himself will come down to the land of Gondor, though maybe he will not ride back. But it is a long road, and man and beast must reach the end with strength to fight.

I don't know any good sources for the ratio of combatants to total population for a society like Rohan, but we can still make an estimate. Rohan greatly prizes being able to fight on horseback, and we can safely assume that the male population between sometime in the mid-teens up to perhaps fifty years of age was expected to fight. That groups is roughly a quarter of the population. (Half female and half the males being under- or over-age.) Again, by a very rough estimate, half the males of fighting age actually would fight: injury, disease, disinclination, etc. The bottom line is that about 10% of Rohan's population might have ridden to Gondor, so a very rough estimate of the population of Rohan is 100,000. This is small compared to Gondor, but Rohan had no cities.

The Shire was a rough circle 100 miles in diameter, so we're talking roughly 10,000 sq miles. Tolkien described it as being based on rural England. It had farms and small villages, but no cities of any sort. Its technology was famously a misch-mash with bits from Victorian times mixed into a generally medieval society. It had no government as such -- it had a dozen "bounders" and some Sherrifs who were mostly haywards -- which made it look a lot like an English shire.

Waving my hands rapidly, I'll try to pull this all together:

Area, 1/5 of England's. Technology sort of medieval, so a population might also be 1/5 of Medieval England or 600,000. But the Shire has no cities or even large villages and does have large areas of woodland: Divide by three, getting to 200,000 people.

Grand total of humans in the northwest: 3-3.5 million people, nearly all in Gondor.

Following the assumption that Harad and the East are roughly comparable, that's 10 million humans total.

Middle-earth is definitely a European-like landscape for the most part and there are definitely some places beyond the black gates that no one has explored. Some of it would like like Eurasia, I'm certain.

The main population of Middle-earth changes, depending on the era, but toward the end of the series, man becomes the predominant race. There's actually a rant from Gimli in one of the movies that was a stab at C.S. Lewis about how dwarves are born. (In The Chronicles of Narnia, dwarves are born from the earth and not of dwarf men and women as they are in Lord of the Rings.) Anyhow, Lord of the Rings was the inspiration for many of the races of Dungeons & Dragons, as well as Dragonlance.

20
Where is the equator in Middle-earth?